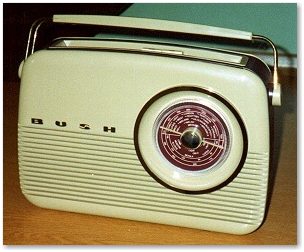 Many collectors will have seen or heard about the Bush reproduction of their classic early transistor radio, the TR82. This reproduction is called the TR82/97. It is claimed to be a limited edition, and costs around £50. I decided to take a closer look, so I ordered a set from one of those home mail order catalogue companies who allow you to return goods within fourteen days. Of course, I had no intention of keeping the set, but this was a good way for me to get a close look at one for a few days!

At first glance, this reproduction is fairly good. The set is the same size as the original (unlike the reproductions of valve sets). To bring it up to date Bush have added the VHF band and a mains power supply. The VHF addition would make the set a closer relation to the VTR103 than to the TR82, but I guess Bush overlooked this little matter since the TR82 was a much more successful and well-known model! 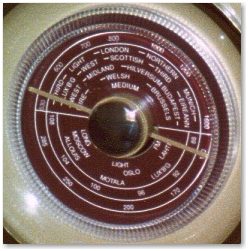 The first place where originality is compromised and accuracy slips is the tuning scale. Obviously, it was necessary to include the VHF band, and this was tucked in tidily below the LW band. Also the tuning scale had to be calibrated in kHz instead of metres - otherwise people would never be able to find the stations they want. The tuning mechanism in the reproduction operates in the opposite direction to the original, and although the frequency markings have been adjusted to suit, the original station names have not! I suppose this is somewhat academic since these stations do not exist now, but I do feel that it shows a lack of attention to detail. Most vintage radio enthusiasts in the UK expect to find "Virgin 1215" at the point on the MW scale marked "Light" - but on this set they will find "Five Live" instead. Oh well!

The trim around the tuning scale is painted on the reproduction rather than metal on the original. The clear dial is good though, and the slow-motion pointer movement has been retained.

The addition of VHF also necessitated an extra waveband button on the top of the set. In fact, the three buttons on the reproduction have the same total width as the two did on the original. The edge operated volume and tone controls are in the correct positions, although the on/off switch is now combined with the volume control instead of the tone control, and the controls work in the opposite direction to the originals. The mouldings used for the knobs are rather disappointing since they are hollow and this is visible from the front of the set. 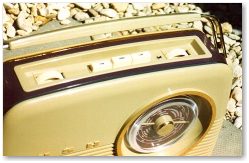 However, by far the worst horror on the top panel is the headphone socket! It looks so out of place! Even the moulded text is raised whereas the other text on the top panel is recessed. Why? If Bush felt it necessary to include a headphone socket, surely the best place for it would have been on the left side of the set, where it was on the original.

Although the metal pieces on either side of the handle look as though they pass right through the handle, in fact they only enter a small way. This makes the handle feel more flimsy than the original, although it is strong enough for the job and looks reasonable enough.

Around the back, the VHF aerial is suitably hidden, so that it is only visible from the front when it is extended. The mains input is connected via a normal figure-8 type mains cable as expected. A nice touch is that the round recess in the lower back, where the mains input on the MB60 valve for-runner to the TR82 was located, has been retained. Perhaps it could have been used for the mains input on this set, but since many people have not seen an MB60 they might think this a bit odd. The back is still retained by a single screw - although it is a bit smaller than the original. 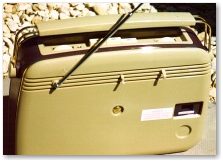 Once it is removed however, the innards are still hidden by a black plastic cover. There is a suitable gap in the lower left corner for a PP9 battery. Since I did not own the set, I did not feel it appropriate to dismantle it further. Anyway, from the performance of the set I can confidently guess that it contains a single IC radio circuit, similar to that found in clock radios and other basic low-cost radios.

So, what does it sound like? To be honest, rather disappointing. The enclosed plastic cabinet gives it a rather boxy tone compared to the original, even though there is not a great deal of bass. VHF is a bit shrill, but the tone control moderates this to a reasonable extent. MW and LW are just muddy and dull - a problem that seems to inflict many modern sets. With the volume turned up more, the set rattles horribly, but this may have been a problem with just this example. For day-to-day listening, I would say VHF is passable but MW and LW are non-starters. This is a shame, as I would have expected the designers to attempt to emulate the sound of the original more. It seems that they have just put a modern set in a reproduction case, and left it at that.

Supplied with the radio is a Certificate Of Authenticity, which reads:

This is to certify that this is an authentic, updated, replica of the classic Bush TR82 portable radio.

This unit has been produced to the same designs and strict standards as the original models. Every detail seen replicates those found on the early versions but, incorporating the latest in electronic technology and manufacturing processes, the highest quality attainable is assured. 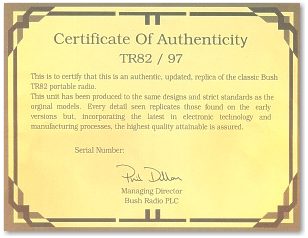 Who are they trying to fool? Having compared the reproduction and the original I would say that this is, to be polite, rather an optimistic statement!

So, would I buy one? No. Particularly since I can buy the original for half the price of the reproduction! In fact I bought a non-working TR82C for ten pounds at a recent Radiophile event (now restored as described elsewhere on this website). However, even if the original were much more expensive, I still would not spend 50 pounds on this rather disappointing reproduction.

I am sure it will prove popular however - but with the general public rather than with vintage radio enthusiasts. It is a much better reproduction than those horrible scaled-down reproductions of valve radios with cassette players in the side! Viewed on a shelf from a distance it looks the part, and the addition of VHF and a mains power supply make it a practical item too. It is claimed to be a limited edition, but the set seems to be readily available from major electrical retailers more than two years after it was released.

Bob Thompson seems to agree with me! He said:

I was bought a TR82/97 for Christmas 1998 and concur with your findings. It is OK but not as good as the original. I took the back off mine, quite a job to do. The reduction drive is really crude. Concentric spindles (centre one greased) and dialcord arrangement. I would rather have the real thing.

Nigel Rogerson has even stronger feelings about it:

Just read your review of the repro TR82B - what an utter abysmal cock-up on the part of Bush!! Like you, I've also had one on approval but I very carefully took my example to bits. The general build quality is, to say the least, crap compared to the originals - many are still going strong some 30 years later. I doubt if the repros will last 10 years, let alone 30 years!

In the one I examined, the circuit revolved around a single chip with one or two others buried amongst some tiny resistors and surface-mount caps. Typical of "modern" designs. The cabinet on mine was very flimsy and the moulding was not exactly like the originals.

The Certificate which comes with the set is, in my opinion, aimed towards those who have either never seen an original or are of the non-technical fraternity. From an engineering point of view - and certainly from a collector's - it is very misleading indeed; the set may LOOK like the original but an authentic copy is ISN'T!!