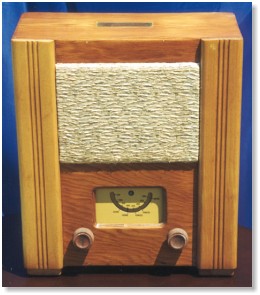 The wartime civilian receiver came in mains and battery versions. Most were Medium Wave only, but a few later sets could receive Long Wave. The receiver I restored was a mains version, just like my Mum and Dad had in the War.

The radio is a 3-valve plus mains rectifier superhet with a "Westector" as second detector, driving the output valve directly, without additional amplification. A Westector was an early solid state, copper-oxide, rectifier which could be used as an RF detector. The lack of an audio stage reduces the set's sensitivity, but it works very well on local commercial stations and pulls in many European stations after dark.

The valve line up is ECH35 triode-hexode frequency changer, EF39 pentode IF amplifier and EL33 pentode output, with a DW4/350 rectifier. Originally, all the valves bore BVA (British Valve Association) code numbers rather than the manufacturers codes above. The radios were made to a common design by 44 different UK manufacturers. The one I worked on was by Murphy.

Despite the economy appearance of the simple pine cabinet, metal tuning dial and mere two control knobs, the quality of construction of the chassis is high. Most of the resistors and capacitors are mounted between a pair of long tag strips with silver plated tags, which makes component replacement easier than the "bird's nest" form of construction used by many post-war manufacturers. The loudspeaker has a very heavy magnet and the mains transformer is massive for the job it has to do.

These radios are well worth restoring and a worthy of a place in any collection.

This radio showed little sign of previous work. All valves had the BVA codes and the only component obviously replaced was one HT smoothing electrolytic capacitor. I disconnected one end of one of the four 0.1 mfd waxed paper capacitors on the component assembly and checked its insulation. As it was only about one megohm, and others were similar, I decided to replace all of them with modern mylar types. The 25 mfd cardboard-cased electrolytic decoupling capacitor for the output valve cathode was completely open-circuit and was replaced. All the HT smoothing electrolytic capacitors responded to re-forming satisfactorily. The mains cable was cotton covered, badly frayed and was replaced.

I checked the mains lead and found that there was near infinite resistance between the leads, even with the mains switch selected to "On". However, on connecting the set to the mains, the set came on with no trouble. The contacts of the mains switch had probably become oxidised with disuse, but cleaned up under the influence of mains voltage. The radio burst into life and appeared to work fine. However, as it warmed up, over a period of several minutes, the reception of strong signals became very distorted. I checked the AGC voltage and found that the AGC voltage on the mixer progressively reduced with time on strong stations, leading to overload. A new mixer valve fixed the problem which I think must have been caused by a partial, temperature-sensitive, short circuit of the mixer grid. The set was a little "deaf" at the low frequency end of the medium wave band, but re-trimming of the aerial circuit helped considerably.

The case of the radio was in generally nice condition, but the top showed the usual evidence of water stains from leaking flower vases. I removed the remaining polish from the top by rubbing with steel wool soaked in cellulose thinners, carefully avoiding rubbing over the "Wartime Civilian Receiver" transfer. An application of wax polish restored the original appearance.