Normally I prefer mains radios to valve portables, but since this one has the ability to be mains powered and was a repair for a good friend who had recently re-discovered it after a number of years, it managed to slip in. The owner received it new as a present for his twelfth birthday in December 1952 (he must have been a good boy, the price then was £13 16s 7d) and remembers listening to it through his teens. He particularly remembers the Goons and Dan Dare (was that radio Luxembourg?).

It appears to have had some heavy use, and was extremely dirty! Besides a replacement output valve, a 3V4, the set showed no other signs of previous repairs. The top plate has suffered some impact, which has bent it, although there are no marks on the wooden case. Hopefully the innards can be stripped from the chassis and the metal bent back into shape. The main selector switch, OFF, Battery, MW, LW, Mains MW, LW - has lost its knob. These battery portables don't seem to stand up to the ravages of time very well. This said, it's probably because they are portables and get lugged and bumped around and taken on picnics etc. and generally receive treatment mains radios don't.

The chassis is easily removed after unscrewing the two case feet at the opposite end to the tuning scale- (mine were missing anyway) unscrew the knurled nuts inside, and out it comes. If it is necessary to disconnect the frame aerial I have found it easier to unsolder the wires from the aerial end; after marking their positions for re-connection of course. It is handy to keep the aerial connected for alignment, so I removed the lid along with the chassis.

There were also two mystery wires, one from the output valve and another from a capacitor mounted on the output transformer. When the wires were joined this would connect the 5000pf capacitor between the anode and the screen grid of the output valve. The ubiquitous wax paper capacitors were present, along with the usual sprinkling of Hunts moldseal types. 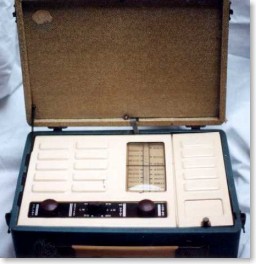 When I later obtained some service data (thanks to Adrian for data, replacement knob and helpful advice - an excellent battery valve portables site too, why not take a look?) it showed a contact operated by the lid stay which completed the circuit causing oscillation, to give an audible warning should the lid be closed with the set still switched on. These wires, along with several others, had rubber insulation that was beginning to crack, so they went on the list for renewal. Other battery sets I have seen use a similar arrangement, but the lid stay switches the set on and off upon raising or lowering the lid. Of course in this set, one would have to switch the LT and or possibly the HT for battery. But the set may be being operated from the mains, so it would be best to switch that too, in order to avoid the transformer and rectifier being powered up for long periods. Obviously this adds difficulty not to mention cost to these little sets. The howler idea is neat in that it warns the user if the set is still switched on when the lid is closed and is inexpensive to manufacture. It would be largely redundant as the lid would not be able to be fully closed with the new round section mains cable, but I decided to connect it for completeness.

Two large resistors used for dropping voltage to derive the DC supplies looked a little worse for wear, so I made a note to renew them too.

Apart from being only two feet long, the mains flex was basic unsheathed twin, so it was replaced by a reasonable length of black three core (to provide an earth), secured with a 3/16" nylon "P" clip to the chassis using the mounting point for the original cardboard clip.

A quick mains test revealed no nasty surprises (since there was no mains plug, a slim-line nylon one was fitted, along with a 1 amp fuse) so the EZ41 rectifier valve was removed and mains applied via the safety lamp. All AC voltages appeared normal. The main HT smoothing capacitor reformed perfectly after a few minutes on the Megger.

The rectifier was plugged back in and the set powered up through the safety lamp. These battery valves don't glow visibly or get very warm so the heater voltages were checked and found to be correct. Although battery valves are used, they are commonly series connected in mains/ battery sets. After half a minute or so hiss could be heard and a few weak stations could be tuned in on MW. LW worked tolerably, but Radio 4 was found at about 1400 Metres.

There was a whopping +2 volts at the output valves grid so the Hunts capacitor was obviously leaky. Two volts might not seem a lot but remember the HT is only 90 volts, and the output transformers in battery sets are wound using extremely thin wire and vulnerable to increased current flow. Well, the little set mostly worked and could only be improved by replacing the Hunts and wax capacitors. The fact that this was a battery set would give me a chance to use some of my stock of 160 and 250 volt capacitors.

Performance was slightly better with all the suspect capacitors renewed but still not as good as I thought it should be. I tried a quick alignment, but needed a massive 200 milli-volts from the signal generator to get any decent noise from the receiver as it was.

In order to access two of the coil adjusters under the radio chassis it saves a lot of bother if the power module is removed. This is achieved by removing its fixing screws and carefully sliding the unit out, towards the inside of the set, transformer end first. It helps if the speaker is moved slightly, but since mine was missing it's top fixing nut this was no great hardship. Don't forget to link the power module chassis to the sets main chassis or you will wander round scratching your head, wondering why the set suddenly won't work..... like I did! The wires connecting the power module to the rest of the gubbins are just long enough to operate the set with the module out on the bench, but since there are only three (four if you count the temporary ground wire) they are easily lengthened if required. The two chassis linked together, (a test lead and two crocodile clips works very well) the set was switched on again and the alignment procedure followed, with a valve millivolt meter across the volume control.

I did manage to get a peak but the input signal required was ridiculously high. None of the voltages quoted in the service data really tallied with any that were measured, either with the digital or analogue meter. A healthy buzz was obtained whenever I touched the centre tag of the volume control, and the lack of signal at the volume control seemed to suggest an RF fault. I had a few spare battery valves so I decided to try a replacement DF91. That certainly did the trick, the performance was vastly improved, and certainly comparable with other valve portables I had encountered. These little 7 pin miniature battery valves don't seem to last long, due to a small cathode I suppose, and because this set had the option of being mains powered had probably been used for long periods. The set then responded well to alignment, and Radio 4 was found in the correct place when tested on LW.

That was about it really, except replacing all the rubber insulated wiring including the two for the "squealer" circuit. These were left a generous length and connected with 4 BA tags under the lid stay contact spring's fixing screws, to aid removal if further servicing was required. The connections to the spring were sleeved to prevent accidental contact with the chassis.

I gather there was originally some sort of internal divider to prevent users coming in contact with mains when the battery compartment flap is open. I made a new one from some aluminium "expanda-mat" perforated aluminium sheet, taken from a scrap radio speaker grille, which was cut to size with scissors and fixed using the existing mounting lugs and self tapping screws. I know my choice of screen is not original, but it will protect the innards from damage by the loose mains plug and prevent user access to live mains, while allowing a flow of air for cooling. Without such a barrier between the user and mains the battery flap would have to be screwed shut, which would be a little impractical to say the least!