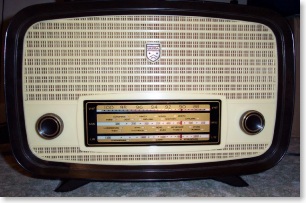 The owner had carried out extensive work to the set, including replacement of most of the capacitors, resistors, output transformer and conversion to UL84 and UY85, but despite this lavish treatment the set was still sulking, and refusing to work on VHF.

The attractive little set was performing reasonably well on the AM bands though, but wasn’t as loud as one would have thought it should be.

Since he reported VHF was almost completely silent, I thought an RF or alignment problem was most likely, and maybe a case of the VHF oscillator not running. 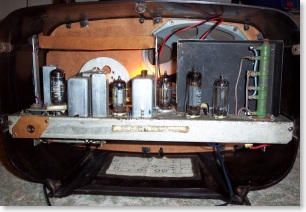 VHF was indeed silent, with nothing to be heard except the usual slight hum. Most voltages tallied with the service information ,though the cathodes of the UCC85 and UF89 measured low.

While my trusty Advance E2 RF was warming up the UCC85 and UF89 were tested on the AVO VCM. Both proved to be low, the pentode hopelessly so.

My only replacement “workshop” UF89 was not quite as bad (but still slightly low emission, but at least it had SOME gain!) so that was fitted as a temporary measure.

A 10.7 MHz unmodulated signal was applied to the pentode’s control grid and the DC across the ratio discriminator monitored with an AVO8. The slight DC voltage did not change as the discriminator coils were adjusted. The diodes in the UABC80 tested OK, as did the coils themselves and most of the components around this valve, including the small electroytic, had already been changed.

Since the set had been worked on, the wiring around this valve was carefully checked. The 10.7 MHz signal was applied to the grid of V3, and could be seen at the anode.

It transpired a connection between the AM and FM IF coils was unmade. Once this was corrected faint Radio3 could be heard.

The alignment procedure was followed again, resulting in significant improvements to the VHF signal which was now coming in at least as loud as the AM bands.

The output transformer fitted to the set had been obtained from the same record player as the output valve, rectifier and switched volume control. The Anode current given for the output valve in this set is a wopping 55mA and although the transformer was correct for the UL84 it seemed rather small for such an ordeal, especially as one still has to add the Screen current!

A sleeved mains plug fused at 2 amps was exchanged for the unsleeved one found on the set before being handed back.