Also unlike the Pye, this particular Ultra has been got-at by a previous repairer. The main smoothing capacitor had presumably failed previously. It had been replaced with a component connected by wires, wrapped in polythene for insulation, and tied onto the chassis. The mains flex has been replaced with modern three-core cable, with the earth cut short. This flex has been chopped off where it enters the cabinet, presumably by a dealer handling the set. Just for good measure, it is full of those horrible little Hunts capacitors, most of which were falling apart. 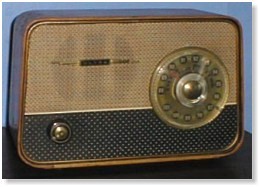 In the initial stages of disassembly this set makes you think it's all going to be so easy! With the back removed the main cabinet simply lifts away, leaving the chassis attached to the front panel. The tuning knob is held with a grub screw, as it should be, while the off/on/volume knob just pulls off. This would leave a potentially live shaft if it was to fall off in use, but fortunately it is a fairly tight fit. The chassis is held by four nuts spotted around the place, but before it can be removed the cabinet fixing rails need to be removed. The extension speaker socket is attached to one of these, so the whole thing remains dangling on the wires. The chassis can then be lifted away within the limits of the output transformer leads. These are permanently connected at the transformer end and are soldered underneath the PCB. Removing the speaker and output transformer assembly allows the front panel to me moved away, but we are still left with a speaker and mounting rail dangling from a chassis that cannot be sat steadily on the bench in any orientation.

Even the Trader service sheet, a publication not normally known for passing comment, says "...chassis can be turned over within limits imposed by rather short speaker leads" so I'm not the only one who found it awkward.

There was no way I was going to apply power to this set in its original state. I disconnected the previous-repair smoothing capacitor to reduce the number of bits hanging by wires, then replaced all the Hunts capacitors. Because this is a nothing-special set I used modern dipped polyester PCB capacitors rated at 400V. Three capacitors were originally 0.003uF, but I fitted 0.01uF because it was the smallest I had reasonable stocks of. From the circuit diagram, none appeared to be critical in value.

Turning to the smoothing capacitor, I realised that the set could not have worked very well after the previous "repair". The positive terminal of the ratio detector capacitor connects to 0V via one of the negative tags on the smoothing capacitor. The PCB layout was designed for a capacitor with three can tags, two connect to the 0V rail and the other to the ratio detector capacitor. This connection was disregarded when the repair was done, so the set must have been quite distorted.

I found a more appropriate spare capacitor in my stock of parts from scrap sets. This was the same physical and electrical size as the original would have been, but the pinout arrangement was different. By enlarging two holes in the PCB, and removing one track, I was able to make it fit. One connection had to be made with tinned copper wire. The connection to the ratio detector capacitor was also made with sleeved tinned copper wire below the PCB.

The screening can from the UABC80 was missing, but I found a suitable type in my collection of bits and pieces. With a replacement length of mains flex fitted, I could see no obvious reason why it wouldn't work.

With the mains applied (via the lamp limiter) it did indeed work, but it was very distorted. I carried out a few quick voltage checks (HT, output valve grid etc) to make sure nothing was seriously amiss, then switched out the lamp limiter to give the set the full mains supply. This didn't help the distortion, but I didn't expect it to.

I tried a replacement UABC80, which didn't help. Since the distortion sounded like a problem with the detector, I carefully tried to adjust the final IF secondary. It adjusted easily, confirming that someone had been at it previously. With it screwed down a few turns the set sounded somewhat better. This is the top adjustment on the IF can; the bottom adjustment was still sealed and had not been disturbed. The top adjustment of the other IF can had also been fiddled with, but again the bottom one was sealed.

My assumption is that the set did indeed sound awful after the capacitor had been replaced, due to the ratio discriminator capacitor being disconnected. The "repairer" did not realise what was wrong so tried to fix it by adjusting the IF cans.

The two disturbed IF cans obviously needed aligning properly. The procedure on the service sheet calls for a frequency-modulated signal generator. Since I don't have such luxuries, I decided to follow the simpler alignment procedure detailed on Bush service sheets and on the Alignment page on this website, using two resistors and a milliammeter, with an unmodulated IF input to set the null.

Because two adjustments were still sealed, I did not want to disturb them. I wound the other two a long way off the correct position so they would have minimal effect, then adjusted the signal generator around the 10.7MHz point for maximum output, which would be on the peak of the two sealed adjustments. I then set the two top adjustments.

With the signal generator disconnected and an aerial connected, the set performed well. It was reasonably sensitive and gave reasonable quality on fairly weak stations with a reasonable aerial.

Since the electrical repairs were finished, I reassembled the speaker and chassis onto the front panel. I cleaned and polished the knobs before refitting them.

I then tested the set again. It still worked, but there was some distortion, particularly at higher volumes on speech and lower frequency sounds. By temporarily connecting an external speaker, I confirmed that the problem was the set's speaker. By pressing the cone in various places, I could make the problem better and worse, which suggests that the cone is a bit distorted. Since I didn't have any spare speakers of the right size I decided to resort to the traditional "fix" to solve this sort of problem. I established the best place to apply pressure on the back of the cone, and then carefully wedged a lump of folded paper tissue between the cone and the speaker frame in this position.

It may seem a bit of a bodge, but it actually works very well if you get the right amount of tissue in the right place. It also allows the original speaker to be retained. If one was repairing sets professionally it wouldn't really be acceptable (although a piece of foam rubber glued in place may be alright), but for a nothing-special set in my collection, it's good enough.