I was given this radio. It had been stored in damp condition in a shed for at least 10 years and the cabinet was riddled with woodworm. The chassis was covered in dirt and cobwebs and there was no model number to work from. It had three valves plus rectifier and the existence of what looked like one IF transformer suggested that it was a "short" superhet (no IF amplifier between the frequency changer and the detector/AF amplifier). The set had a series heater string and no mains transformer, so it was clearly an AC/DC set. Given the apparent specification and the condition, I would not normally have bothered to restore it but committed it to the resting place in the sky for dead radios. However, it was a gift and the donor was interested in it having a future. 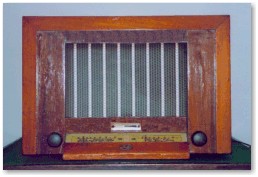 I could not read all the type numbers on the frequency changer valve, but found a feint "14". The valve is a loctal type, so I looked through Paul Stenning's Valve Data CD ROM and found 14S7 as the only likely candidate. The AF and output valves were 12J7 and 35L6GT which matched the heater current of the 14S7. Problem solved. Having no circuit diagram, I followed the next detective step which is to try to find a similar model by the same manufacturer. Again I turned to a Paul Stenning CD ROM and found that the Sobell 439 "Sobellette" had virtually the same chassis. My radio had added mains RF filters and a tone correction circuit in the feed to the output valve. Another problem solved. My doubts about the quality of the radio were confirmed when I noted that it used a "leaky grid" detector and pre-set positive feedback at IF to increase the IF gain from the frequency changer. Also, there was no AGC. Manual gain control was via adjustment to the screen grid voltage on the mixer. Leaky grid detectors distort, particularly on weak signals and pre-set positive feedback is a very mixed blessing. The lack of AGC is a real problem when tuning past strong local commercial stations.

The chassis was filthy and corroded. It cleaned up fairly well but it was not worth making it beautiful. During vigorous cleaning, I managed to break two wires on the tuning coils. Fortunately the tails were long enough to reconnect. Soldering very fine wire is tricky and I do it under a magnifying glass. Do not try to scrape the insulation from very fine wire. You are liable just to break the wire again. I have found that the enamel insulation can be teased off with a small drop of paint stripper. Some enamel is self fluxing, but you never know what you will find.   Again, work under a magnifying glass, so you can see what you are doing. As usual, all the waxed paper capacitors were leaky and all were replaced. The main smoothing electrolytics refused to re-form and were replaced with a bundle of wire ended capacitors mounted under the chassis.

As regards the cabinet, it was first treated liberally with woodworm killer. The front of the cabinet was not too bad and was just rubbed over with French polish to cover up the scratches. The top had the usual damage from wet flower vases and the sides were very scratched, so they were stripped after masking off the front. The worm holes were then filled and rubbed down. The mahogany filler used did not match the walnut veneer of the panels so black, white, red and brown paint were mixed to various matching shades and each hole was touched up with a small paint brush to match the surrounding wood. The result is OK from a distance.

The radio works just as poorly as I would expect. I gather that Sobellettes are pretty awful as well. With the positive feedback carefully adjusted, the set is reasonably sensitive, but distorts at low and high volume. It really only sounds decent at one volume level. Long wave performance is surprisingly good. The good news is that my Son-in-law likes the look of it, so I can find it a home.