The only information from the owner of this set was that it was not working! From previous experience I know that the small 7-pin battery valves (DL94 etc.) used do not last for long, and are often found to be in need of replacement in mains-battery sets such as this. Therefore, the first job was to test them, and they were indeed all very low emission. Fortunately these valves are not expensive, and I bought a complete set of four for £2.50 each from Valve and Tube Supplies. 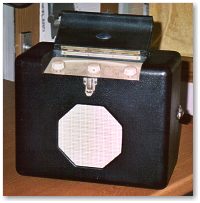 However, even with the new valves fitted the set did not do much! The output stage was working OK, but the preceding audio amplifier stage was not working at all. A quick check with a meter showed that there was only a few volts on the screen grid. This is biased to the HT rail via a 4M7 resistor and decoupled to ground with a 0.1uF capacitor. The resistor was OK so I replaced the capacitor (one of those horrible wax-paper jobs). Now the audio stage was working but the RF and IF was still dead.

Since there were four more wax-paper capacitors in the set, I decided to replace those too. Now the set worked, just about, on LW but was dead on MW. However connecting an external aerial bought the MW band back to life. A quick continuity test on the MW frame aerial revealed a broken wire close to one of the terminations. With this repaired the set worked fairly well on both bands. However, it was not very loud and tended to distort when the volume was turned up.

The LT voltage was OK, but the HT was only around 40V. I am surprised the set worked as well as it did with the supply that low! The cause of the problem, not surprisingly, was the metal rectifier. I connected a 1N4006 diode in parallel with it, and the set worked much better. However, the HT was now around 110V - I cannot leave it that high! To reduce the HT to a more acceptable level I increased the HT decoupling resistor from 1K8 to 3K3, this gave an HT of around 87V.

I checked the alignment because some of the adjustments looked to have been disturbed, but it was not too far out. The only work remaining was to replace the mains flex and plug. 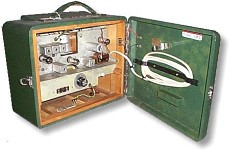 One problem with this type of set now is that it cannot pass modern electrical safety tests unless the hinged back is screwed closed. Otherwise, if someone was to open the back while the set was connected to the mains, they could receive a nasty electrical shock by putting a hand underneath the chassis onto the back of the mains/battery selector switch. I fitted an "Electrical Safety Test Failed" sticker around the mains cable and explained the reason to my customer when I returned the set. Of course, he will use it anyway, but I have to protect myself.

This photograph showing the internal was is taken from the Vintage Radio Database website.