This set was given to me, and was in a fairly sad condition.  The cabinet was filthy, the tone control knob was missing (the control shaft was broken) and the base plate was broken.  It was also rather battered.  However, when a battery was fitted the set did work, albeit with some crackles.

The RIC-2 is electrically similar to the earlier RIC-1, which was Roberts’s first set to use an IC.  The changes in the RIC-2 are mainly cosmetic – clearly Roberts were bringing the model to the same appearance and form of construction as their other models at the time.

The RIC-2 circuit diagram is included in the 1971-72 edition of Radio and Television Servicing (page 667).  Comparison with the RIC-1 circuit in the 1969-70 edition reveals only a couple of minor component value changes.

The set uses an IC (Mullard TAD100) to replace the entire RF and IF stages, as well as the AF preamplifier.  A ceramic resonator assembly is used to set the IF passband.  Three transistors (OC71, AC187 and AC188) are used to form a direct-coupled class AB output stage.

Anyone who has worked with Roberts transistor sets will know that there are three main things that will stop them from working:

This particular set did not use AF117 transistors, but the other two problems were present!

Most Roberts sets of this era are dismantled in the same way.  The base is removed, the battery is removed, the speaker wires are unsoldered, then the two screws holding the chassis to the brackets mounted on each end of the cabinet are removed.  If the set has a telescopic aerial, the screw for this needs to be removed too.  The chassis can then be withdrawn from the top of the cabinet, complete with the tuning scale etc.  Normally this is a bit of a struggle because it will be stuck in place with years of dirt and muck!

In some sets, including my RIC-2, there is a DC input socket mounted on the back of the cabinet.  This is held in place with two wood screws that are almost impossible to remove.  Rather than struggling, I chose to cut the wires close to the socket.  By leaving about 6mm of each wire on the socket, I could easily see which colour went where when reconnecting later.

Having extracted the chassis, the knobs can be removed (they are generally push-on types).  Care must be taken because the control shafts are sometimes plastic and easily broken.  There is often an earphone socket and a car aerial socket on the top face, so the wires to these items need to be unsoldered (draw a sketch).  Don't let the earphone socket get too hot or the plastic will melt and it won't work properly.

The two edge trims may now be removed and the tuning scale lifted away.  Underneath there will be loads of dust!

The cabinet base is a flat piece of wood that is fitted with a turntable in the centre (so that the set can be rotated).  Near one end is a round hole large enough to insert a finger.  The base fits into the cabinet between a spring and a small block of wood, under some pieces of trim.  By inserting a finger in the hole the base can be pulled against the spring and lifted out.  On later models the spring is replaced with a piece of self-adhesive foam.

My base was broken lengthways, and the turntable was missing.  The two pieces fitted cleanly together so I repaired it with some woodworking adhesive then held the pieces together with some elastic bands while the glue dried.

From my previous encounters with Roberts sets (my father and I repaired sets voluntarily for the British Wireless for the Blind Fund several years ago) I still had a few spare bits and pieces.  I found a suitable replacement turntable from a spare R800 base (the R800 is a much later model but the turntable is the same).  This was fitted to my base using the then-standard method of melting the ends of the plastic spikes on the inside with a soldering iron.

In my collection of Roberts bits and pieces I managed to find a similar knob to the missing one.  However this was for a smaller shaft than the existing control.  Since the shaft was broken anyway, I either had to repair it or replace the control.  Since I didn't have a spare control to hand, I decided to attempt a repair.

The first thing I needed was some material to make a replacement shaft.  This needed to be 4mm in diameter and about 20mm long.  After some searching I spotted a small model-making paintbrush.  Although the plastic handle is tapered I could get a sufficient length that was close enough to the right diameter.  I cut the brush section off then filed a flat onto the handle (which I will now call the new shaft) to fit the knob.  Care is needed to keep this parallel otherwise the knob will not sit straight.

With this part successful, I needed to fit it to the remains of the existing control.  The control was disconnected and removed from the chassis.  I then dismantled it (by unfolding the four bent-over tabs) and removed the shaft/wiper section.  I cut the broken end of the shaft off with a junior hacksaw, so it was square.

The next stage was to drill a 4mm diameter hole into the 6.35mm (1/4”) diameter shaft.  It needed to be central and straight.  A lathe would have been ideal for this job, but I do not have such luxuries.  However I do have a bench drill, which is the next-best option.  I fitted the shaft/wiper assembly into the drill vice, ensuring it was vertical.  Rather than going straight in with a 4mm drill, I started with 2mm.  Generally the best method of drilling plastic is to use a fairly high speed and go very gently, lifting the drill away every few seconds to clear the swarf and prevent it getting too warm.  A sharp drill is essential to prevent snagging.  I drilled down into the shaft about 10mm deep, then enlarged the hole to 4mm to the same depth.  Before starting I had marked the centre of the shaft with a fine marker pen, by eye.

When I tried the new shaft in the hole, I was pleased to find it was a good push-fit.  The slight taper of the paintbrush handle helped here.  It therefore required no additional fixing.  Before pushing it in finally, I fitted the knob then rotated the shaft in the hole to get everything as close to concentric and straight as possible.  No matter how carefully one does this sort of job, there will inevitably be some lack of precision, but by rotating the parts I was able to find a position where the errors cancelled each other out – near enough.

When I came to reassembling the control, I found that the shaft was a very tight fit into the bush.  By pushing the new shaft into the existing one, the existing one had stretched in diameter slightly.  I reduced the diameter by using sandpaper, followed by wire wool to smooth the finish.  I then reassembled the control, lubricating everything with silicone grease. 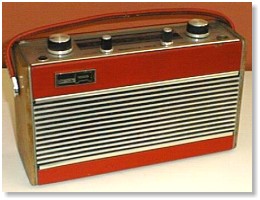 The best way to clean the tuning scales on this type of Roberts set is foam cleanser.  Spray it on, leave it to work for about a minute, then wipe off.  This will need to be repeated a couple of times if the scale is very mucky.  My RIC-2 had obviously spent its former life in the usual home for battery portable radios – on the fridge in the kitchen – because it was covered with brown greasy muck.  Some foam cleanser will get into the earphone and aerial sockets, but this does not matter.  Once the dust in these has become soggy it can all be hooked out with a small jewellers screwdriver.

After cleaning, the scale still looked a bit dull and lifeless, so I polished it with Greygate Plastic Polish.  This is specially formulated for Perspex and similar acrylic sheets, so is ideal for the job.  Although the print on these scales does not tend to come away like glass scales in valve sets, care should still be taken not to get cleaner or polish on the printed side.

The cabinet and trim were also cleaned with foam cleanser, after removing the speaker.  With the speaker out I was able to flatten the speaker grill metal by hand.

The vinyl covering is damaged in a couple of places, but there is nothing I can do about this apart from recovering the whole set, and I didn't think it was bad enough to justify that.  The whole set looks a bit battered anyway, so to do the job properly I would need a new speaker grill, knobs, handle, wooden end cheeks etc.  Not worth the effort!

The set was then reassembled sufficiently to allow it to be tested.  As expected from previous tests, it worked OK but crackled when handled.  The volume control and waveband switch were treated with contact cleaner because these crackled when operated.

The PCB and chassis wiring were then examined and a number of suspect joints were resoldered.  Anyone who has worked with Roberts equipment will know that they seem to use the minimum amount of solder on their joints, in particular the interwiring.  There are invariably a few connections that are so delicate that you wonder why the wire hadn't drop off years ago!

The set now behaved better, but there was still crackling and distortion when the speaker wiring was disturbed.  This turned out to be due to the earphone socket.  I have had problems with these previously, so it didn't surprise me.  Unlike the open types used on far-eastern trannie radios, the enclosed types used by Roberts and other British manufacturers cannot be easily repaired.  The earphone socket disconnects the speaker when a plug is inserted, and it is this arrangement that fails.  The only sensible solution is to disable this function so that the speaker remains in circuit even if an earphone is plugged in.  This is easily accomplished by moving the wire to the speaker to a different tag on the socket.  It is unlikely that anyone would need to use this socket now, so the solution shouldn't cause any problems.

The set now worked reliably, but I was not happy that the alignment was correct.  It sounded rather shrill - as though it was slightly off-station.  As a quick check I connected a test meter across the AGC capacitor and tuned into a fairly weak station on MW.  I then carefully adjusted the cores of the two indictors in the IF filter assembly for maximum reading.  Tuning across both bands the set now sounded much better, so I decided to leave it at that.

The set was then finally reassembled.  To finish it off I polished the case with household aerosol polish.