This fabulous looking olive green trannie was left by one of my regulars with a report of "all off" following it's purchase from a well known internet auction site. It was in extremely good cosmetic condition though, even down to the undamaged brass telescopic aerial. A couple of recently purchased PP9 batteries were left in a plastic bag with the set.

A quick look inside confirmed my worst fears, this one used the dreaded AF11x range of transistors. The batteries were fitted, and sure enough the set gave the now familiar "pop" on switch on. A faintly audible hiss indicated the output stage was probably OK. A healthy hum was produced by touching a screwdriver blade to the centre tag of the volume control confirming the audio stage as working, suggesting a fault in the previous stages, in other words with the aforementioned transistors. 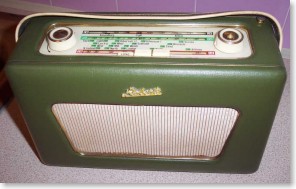 I thought I would start with the transistors I could see, so the mixer/oscillator transistor was given a tap with the handle of a small screwdriver. This is the first time this trick has actually worked for me, so I was surprised when the set suddenly burst into life and worked well on all bands. Once the set was dismantled, the faulty transistor was replaced with an AF125. These are still available from companies such as RS and CPC. I found the latter to be cheaper.

Care must be taken with the printed circuits in these old Roberts. Both this one and a recently repaired R200 had one or more pads which had become detached from the board, probably due to heat damage during previous repairs. Of course the fact both sets had probably had one or more AF117 transistors replaced at least once already didn't help.I found my temperature controlled iron was the best thing to use, and it enabled quick re-soldering without lifting any pads or tracks. A solder sucker would be very useful if one was dealing with a few of these sets.

There are two more of the fault prone devices (inside a sealed can) in the IF stages. The customer wanted all the AF11x transistors changed so I would have to delve inside! The IF box looked fairly easy to remove from the board, with only about four pins and a ground wire to de-solder (a solder sucker would be extremely useful here too!). In order to remove the board though, one must remove the end cover (carefully bend back the lugs) and the three connecting pins at the other end.
I have to admit that I took the cowards way out, and CUT the pins which then enables easy removal of the pieces with reduced risk of damage to the PC board . The pins were later replaced with lengths of single core wire of suitable diameter. The board can be gently eased out by pressing the protruding end of the board (the part you have just removed the connecting pins from) GENTLY on the bench. 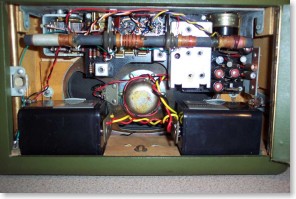 Replacement of the transistors is fairly straightforward, but don't leave the leads too long below the board (bend ends flat to the track and solder) or the ends will foul as the box is re-assembled, or even short onto the aluminium box at the edges of the holes provided for measurement of transistor voltages.

After DOUBLE checking the connections and soldering the box was re-assembled and fitted back into the set. I must be improving, it worked first time!!

Tuning seemed accurate on all bands and a wide variety of stations was able to be received.

The wavechange switches and volume control were slightly crackly when operated, but a burst of switch cleaned sorted that out. These top mounted controls (as found on many transistor radios including Roberts models) seem to be vulnerable to dirt and dust , and in my experience will nearly always need cleaning.

The output stage idle current was adjusted (RV3, nearest the ferrite rod) as it differed slightly from the value of 4mA given in the service data. A link is provided under the board for the easy insertion of a meter.

A quick check with an audio signal generator and 'scope revealed a lack of symmetry in the output stage, the lower portion of the waveform was clipping much earlier than the upper. A slight adjustment of the relevant preset (RV2, furthest away from the ferrite rod) was all that was required to correct the imbalance. It is sometimes difficult to judge things like this with a scope, and if you find this to be the case, or do not possess an oscilloscope the service information suggests adjusting the preset until the voltage at the junction of the two 4r7 resistors (and +ve of the 350uF speaker isolating capacitor) adjacent to the output transistors is at half the total supply. The sound was noticeably better at next test, and all voltages and currents normal.

As with many large Roberts, this set had a pleasing tone and good performance. Short wave was also good, and I managed to receive many interesting stations simply using the telescopic aerial during testing. An electrolytic that looked bad (evidence of electrolyte leakage around the top connection) was also changed. All others tested OK.