I came home from work to find this one had been left for repair, along with a post it note bearing a description of the fault. "Dead"

The green Rexene covering was faded and in need of a clean, the door catch was broken and one of the brass trims was missing from the tuning knob, but other than that this classic portable wasn't in too bad a shape. The leather handle was in good condition, which is nice because they are often found broken on these Roberts radios, so take care.

Inside looked in good clean condition but did have evidence of previous repairs, during which the battery leads had been lengthened and the join insulated with tape, (AAAAARGH) A few components had also been replaced, including an output transistor, which was now an OC84.

The set came without a battery (and the customer had asked me to supply one) so a new one was purchased and connected via the milli-amps range on the multimeter, onto the rather messy looking battery leads. Only about 7.5mA was drawn on switch on, and initially the set did appear to be dead, but a feint hiss could be heard from the speaker with the volume control at maximum. 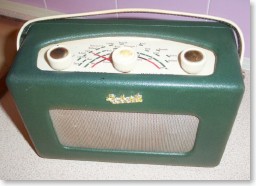 Seeing as this set uses three of the dreaded AF117 transistors, I investigated those first. Why are these particular transistors notorious? Well it's a long story, but quite simply they develop internal short circuits, most often between the shield lead (which is generally connected to chassis) and collector which will stop the transistor from working.

First I tried tapping each of the AF117's with the handle of a small screwdriver, but this had no effect. Another radio tuned to MW and placed near the Roberts suggested its local oscillator wasn't running.

While I was poking about taking voltage measurements at the connection leads of the mixer oscillator transistor the set suddenly burst into life, suggesting either a bad connection on the printed circuit or possibly a faulty transistor. It is fairly easy to remove the chassis, one merely having to remove the knobs and the wooden wedges which can be seen in the photos. The chassis is then pulled down towards the speaker and gently lifted using the supports for the ferrite rod. The speaker leads are of sufficient length to allow the chassis to stand on the bench beside the cabinet.

I would also need to remove the speaker in order to deal with the small dent in the speaker grille. Upon removal of the chassis, the fault was traced to a broken track on the printed circuit. A solder pad had become detached from the board and movement had caused a break between the loose pad and the still secured track. I suspect the AF117s had been changed at least once before, and I would think the problem was caused by over heating of the pad during this work. The break was bridged (or was it bodged?) with a length of 0.5 mm single core insulated wire.

On subsequent testing the little set worked very well on both bands, but seemed a trifle distorted (yes even for MW!) Most voltages tallied with my rather limited service information (R&TV servicing 1960-61& 61-62).

I wondered if this was related to the presence of an OC84 transistor in the output stage, either due to imbalance or incorrect bias current.

The wire link between the centre tap of the output transformer and -ve chassis was unsoldered at one end, as detailed in the service info, and a meter inserted to measure the current. I disconnected the wire at the chassis end, just to make it easier to connect the meter.

This is where an analogue meter really comes into it's own, as the needle will move slowly and smoothly as adjustments are made, where-as a digital meter will display the information, well digitally I suppose, in "notches", making the whole process more difficult. Digital meters are useful for accurately checking the current afterwards of course! 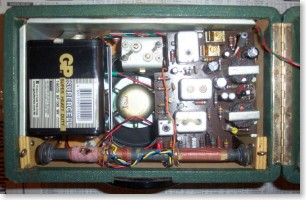 A pre-set resistor is provided for bias current adjustment, and current initially read a little over two milliamps. A quick twiddle brought the bias current to the quoted value of 4mA. The output stage certainly sounded better. A signal from an audio generator was applied between chassis and the centre tag of the volume control. The output waveform across the speaker looked reasonable on the 'scope. Whilst not perfect, it wasn't that bad either!

The customer had asked for a complete overhaul so the electrolytics were checked. One was found to be slightly leaky and another about half it's correct value. They were all replaced with modern radial types, but I did at least have the decency to use some fairly inconspicuous black and dark blue ones! For future reliability the customer had also asked me to upgrade the AF117 transistors. These were changed for some AF125 from my small stock. One could probably use almost any germanium transistor (a working frequency of a few MhZ is all that is required for MW and LW. For FM I would definitely recommend the AF12* series, as they have a very good frequency response.) but I knew these would be certain to work, and as they are almost exact electrical equivalents there shouldn't be too much effect on alignment at AM.

I wondered about the two Hunts "Mould-seal" capacitors too, and when these were removed and tested, were found to be leaky. A simple test is all that is required. All I did was to remove the capacitor and connect it in series with the battery and the 10 volt range of the AVO. Any deflection at all indicates a leaky capacitor. The needle deflected about 1/3rd to ½ of the scale for both the Hunts capacitors. Needless to say these were replaced too.
While I had the chassis out on the bench the pieced together battery connecting wires were also replaced, with the existing connectors re-soldered to the ends. In order to minimize the risk of the battery terminals short circuiting on the battery retention clip I considered the battery was better fitted upside down, so sufficient length was left on the leads to allow for this.

I also took the opportunity to clean the Perspex dial window and the knobs (once the metal nuts were removed) in a bowl of hot soapy water. The scale itself was cleaned gently with baby wipes. The pointer can of course be removed if necessary for cleaning.

The first job here was to renew the broken door catch which was missing its buckle. After seeking advice on Paul's Vintage Wireless Forum (I was about to refer to it as a VW forum, but realised that may cause confusion!). I was advised an Internet hobby shop, sold almost identical catches for the princely sum of 55 pence, (at the time of writing) so I bought two.

The old catch was quite firmly fixed. I was able to prise both halves away from the case by a small degree, and push them back again, leaving the nails slightly proud and able to be gripped by a small pair of wire cutters and extracted. The nails I had ordered with the new catches weren't long enough, but I was able to use the originals to fix the new catch. The new catch fitted well and held the door at just the right distance for the rubber "foot" screwed to the inside of the door to hold the battery securely.

It seemed to make sense to me to clean the case and restore colour to the Rexene while the innards and speaker grille were on the bench. After a quick wipe over with cleaning wipes the empty case was treated to a liberal application of "Pine Green" Meltonian shoe cream. I found removal of the handle was not necessary as the shoe cream will rub off any brass or plastic trim. After a quick shine, I was very pleased with the result.

The finished colour turned out to be an almost exact match to the original, as found inside. The two small dents in the grill were carefully rolled out using a small length of old broom-handle. I used a few sheets of newspaper under the grill, to prevent any damage to the "visible" surface.

The assembled radio worked very well, but after a week or so as my kitchen radio (which gave the TR82C a rest!) the wave change /on-off switch became slightly crackly. A shot of switch cleaner soon cured that! A good solid radio from Roberts, with the usual pleasing tone.