The owner of this radio had retrieved it from a neighbour's garage and spent many hours restoring the cabinet. He had done a wonderful job of it too. The chassis was a different story however.

This photo is taken from the Past Times Radio website. 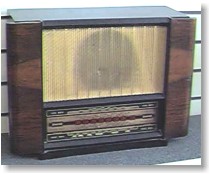 I became suspicious that all was not well when I removed the valves for testing. Although I did not know the numbering system on the valves used (7S7, 7B7 etc.); I can recognise the function of some types of valve just by looking at their innards. Rectifiers in particular are easily identifiable, and I was surprised to find one in the mixer-oscillator position! The valve in the rectifier position looked like an output valve, and a quick check in a valve data book confirmed that I had a full set of the valves but they were indeed all in the wrong places. Presumably, someone had been trying to get the set working by swapping the valves around!

Because of this treatment I was not expecting any of them to be much good, and the tester confirmed my fears. The underside of the chassis was a mess too, with a few charred resistors and many wax-paper capacitors that looked like they had been chewed by mice. Fortunately the mains and output transformers were OK (maybe they are not so tasty!). The owner accepted my repair quote, even though it was fairly expensive, so I ordered a complete new set of valves and a copy of the Trader service sheet. I often do not need the service sheets but when a set is in this state, it is essential.

Fortunately, the repairs went fairly well, although it needed a new main smoothing electrolytic capacitor, which I had not accounted for. The old capacitor had tested OK but the set gave too much hum. Rather than increase the already fairly steep bill, I fitted a good used cap from a scrap set, which did not owe me anything.

The set then worked fine, but a few hours into the soak test it started making loud crackling noises. The cause was obvious - blue flashes inside the rectifier valve! The valve tester showed leakage between one anode and the cathode, so it went back for replacement under guarantee. Once the replacement arrived the set worked fine - but I gave it a much longer soak test than usual!

There are one or two repair jobs that I have a niggling doubt about, and half-expect to get back. This was one of them, but I haven't seen it yet! The customer bought another set in for repair recently, and he mentioned that the Regentone is in daily use and still working well after nearly a year. I hope that its run of bad luck is now over.