A late Fifties or early Sixties American radio using germanium transistors, powered by four AA cells fitted into a clear plastic removable cartridge, or an optional rechargeable battery pack. Medium wave only (long wave is not used for broadcasting in the US), it employs a typical line-up of self oscillating mixer, 2 off IF amps, diode detector, audio preamp, driver and balanced push pull output stage using driver and output transformers.

The set arrived "dead" although the crackling volume control confirmed the audio stages were working. One problem with diagnosing these old germanium radios is that the RF and IF stages are so quiet that it's difficult to decide whether there's a major fault or just loss of signal.

After dismantling and connecting to my bench power supply set to 6 volts, the first step was to check the decoupled supply to the IF and mixer section which was present at about 5 volts, about what should be expected. I then noticed a wire from the aerial coil to the tuning capacitor was just hooked around the capacitor's terminal. After resoldering this the set came to life and I was able to pick up Liverpool's Magic 1548 golden oldies station, but that was about all. This is a very strong signal, coming from a 4kW transmitter located only about 15 miles away as the crow flies. So out came my trusty Advance E2 signal generator.

Upon inspection, the IF transformer cores were found to be cracked, so someone had obviously had a twiddle sometime during the set's life. The IF chain showed greatest gain around 455 kHz, and as this was a standard IF used by USA manufacturers I carefully peaked the three IF transformers at this frequency and sealed their cores with a little paraffin wax. This increased the sensitivity enough to receive BBC Radio5 on 909 kHz, and after tweaking the aerial trimmer on the tuning capacitor the HF end of the waveband became more active, but the LF end remained quiet. 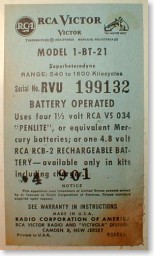 Upon general inspection, one electrolytic capacitor was found to have leaked. This was one of those plastic sealed types, of which there were four: 2 off 10uF and 2 off 190uF (replaced with 220uF). One of the 10uF capacitors, feeding the base of the audio pre amp transistor, was operating with only 0.4v across it. Aluminium electrolytics work best when operated at about three-quarters of their maximum working voltage; running at very low fractions of the working voltage can lead to depolarisation and increased ESR. Given the very low voltage in this position it was decided to fit a tantalum capacitor. Tantalums, while not exactly "vintage", can be run with very little applied voltage without losing value or becoming leaky. You can see it at the bottom centre of the PCB just to the right of the final IF transformer.

The volume control was treated with Electrolube No.1 fluid. A blanket resoldering was done to cure quite a few suspect joints before cleaning and varnishing the PCB. While the PCB was removed, the opportunity was taken to thoroughly wash the cabinet in warm water and detergent. The cabinet back couldn't be washed because of the paper label. Finally, after assembly the set was soak tested for a couple of days before returning to the owner.