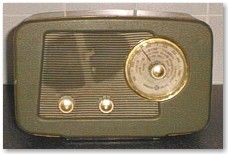 I bought this set for just a few pounds in an auction some time ago, and hadn't got around to doing anything with it. The fact that it contained a UL41, which is unlikely to be in good order in an auction set if a dealer put it in, was one of the reasons why it remained low on the list.

Then I read the experiences of Rob at Wireless Works with a similar set in his "Wireless Waffle" column in Radiophile magazine. The title of his article was "Aspirations to Mediocrity", and in it he described a day where just about everything was "middling mediocre" - including a Pye Piper. His Piper was a later version than mine (it used a UCL82 output valve and UBF80 IF amplifier and detector), but it was enough to inspire me to get my Piper going to see if it really was that bad.

The set cost just £7 new in 1956, so it was clearly not intended to be an up-market model! It receives MW and LW, the latter being preset to 1500m (then the Light programme, now Radio 4). The cabinet is made from finest quality bent plywood with vinyl on the front. It is built on a PCB, and features permeability tuning. To further save cost it has a throw-out wire aerial in an era when moderately decent sets used a ferrite rod. If it wasn't for the PCB, the whole design including the choice of valves seems a couple of years behind its time.

On initial inspection, the set seemed to be in reasonable condition. The mains flex and aerial had been cut short. One section of the dropper resistor had been bridged with a replacement resistor, and one of the small Hunts capacitors on the PCB had been rather crudely replaced with a much larger one from the same manufacturer. There were a number of other Hunts capacitors around the place, which didn't inspire confidence. The PCB was filthy.

The short stub of mains cable was long enough to make a connection for initial tests. It was figure-8 cable with no indication of polarity, so I checked continuity between each core and an IF can with the power switch on to establish which wire should be neutral. I connected the set to the mains via the lamp limiter.

It worked! However, within a couple of minutes, the sound became distorted. Checking the service data, I found that the oversize replacement capacitor was the grid coupling to the output valve. Checks with a meter showed 45V on one side and 5V on the other side. Either it was leaky or the UL41 was duff.

I switched off and removed the UL41 and UY41 valves to get access to the capacitor. The previous replacement had been soldered to the cut leads of the original component, so I unsoldered it and temporarily soldered in another replacement the same way. I noticed that the replacement was 0.04uF whereas the service data showed 0.01uF. I used 0.01uF. With the valves refitted I tried the set again. The grid voltage stayed nicely at 0.14V - not quite zero but not enough leakage to worry about. The UL41 - in a set costing under a fiver - was obviously OK!

Time to take the set apart and fit the replacement capacitor properly. There was also a wax-paper capacitor across the mains input, which looked the worst for wear and would probably go bang sooner rather than later.

Naturally, the insulation over the grub screws in the knobs was missing. With these removed, and the four internal fixings undone (two of which were already loose), the chassis lifted out to the extent of the output transformer/speaker leads. The two capacitors were quickly replaced. I could see that someone had replaced the on/off/volume control pot in the past, with what appeared to be a second-hand component. It worked OK but the wiring was somewhat messy so I tidied it up, and replaced the mains flex. I also tidied up the mounting of replacement resistor on the dropper. The waveband switch was crackly, but responded well to a shot of contact cleaner.

I looked closely at the other Hunts capacitors. One was visibly cracked. This is the decoupler for the frequency-changer and IF amplifier screen grids. It has about 125V across it, so it was replaced. I also replaced the AGC decoupler because this is a high impedance section and any leakage here could cause reception problems. The remaining capacitors looked OK and since they in positions where they were not subjected to high voltages, I left them. The tone corrector was a wax-paper job mounted on the output transformer. This looked fine and showed no signs of distress after a period of running, so again this was left. 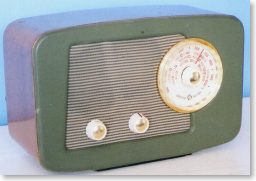 With the electrics done, I turned my attention to the cabinet. First, the speaker was removed. The speaker fabric was loose in front of the speaker. The green surround is held in place from inside the cabinet with a number of small screws and two nuts. With this removed I was able to stretch the fabric back to about the right position and fixed it with staples (using a staple gun) positioned where they would be hidden behind the green surround. A dirty mark on the fabric was removed using CarPlan "Klean Up" car upholstery cleaner applied with a toothbrush.

The brass trim around the edge of the front section was rather tarnished. However when attempting to polish it I realised that it was a brass plating over another softer metal, so nothing further could be done with it. The green section was cleaned with foam cleaner then polished with ARD "Silicone Refurbish" (a silicone polish).

The rest of the cabinet was dirty and a bit battered, but responded well to a cleaning with foam cleanser followed by polishing with the silicone polish. This polish filled the chips, causing them to be a lot less visible. I filled the corner crack with a little wood filler from the outside and applied some woodworking adhesive to the inside.

The knobs responded well to the usual soapy water treatment, following which the set was carefully reassembled. The RF alignment was slightly out with the knob correctly zeroed against a dot on the scale. Rather than delving inside and fiddling with the adjustments (which were still sealed), I positioned the knob slightly away from the zero position at the end of the scale.

As designed the only clamp for the mains flex is a clip that fits under one of the rear panel screws. This is not adequate, but there is nothing internally to fix the cable to for extra support. I secured it to the side of the spring-clip intended to take the rear panel screw with a couple of cable ties. Not ideal, but I didn't have any other options.

Even bearing in mind the original selling price, it is fair to say that the set is nothing special. On strong stations, it does fairly well, but it struggles on anything more remote. Connecting a longer aerial improves the weaker stations a bit, but makes the local stations sound worse (overloading the RF/IF stages?). About three metres seems to be the optimum.

Sound quality is nothing to get excited about. Bass and treble are both notable by their absence, and the thin cabinet tends to echo. As a result, the set sounds fairly feeble on music (at least on the fairly limited choice of music on MW). It's a lot happier on speech. The clear studio speech on Radio 4 on LW is probably the best station to listen to on it. Live speech (in particular sports commentaries) on Five Live and Talk Sport are a bit more stressful.