The Baby Q is a battery portable model, designed to operate from a 90V HT battery and a 1.5V LT battery. It is built into a vinyl covered wooden case, which includes space for the batteries and has a hinged lid over the controls.

The reported fault with this set was instability. A previous repairer had already replaced the main HT decoupling electrolytic and had rewired the internal aerials and output transformer with generous lengths of pink wire. 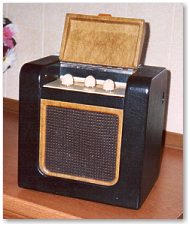 I started by removing the chassis to see what other work had been done to the set. This in itself is not that straightforward because, according to the Trader sheet, the knobs and valves have to be removed and several wires disconnected before the chassis can be unscrewed and lifted out. How one is supposed to test it in this state is not explained! The previous repairer obviously had this problem too, because his lengths of pink wire were sufficient to allow the chassis to be withdrawn without disconnecting anything. From the state of the screws the chassis had been removed several times before, so I was surprised to see that there were no signs of previous work!

I should explain that the chassis in this set consists of a flimsy piece of metal mounted vertically in the front of the set, with the valves pointing backwards. The IF cans are on angled sections, and point downwards either side of the speaker. The chassis is retained by four wood-screws into the cabinet, and all four are needed to give it some sort of rigidity. The space between the chassis and the cabinet front is limited, which could account for the cramped layout of the components behind the valve sockets. Indeed the layout is so tight that many of the components are covered in a horrible plastic covered fabric sleeving to prevent shorts.

The set contained several wax-paper capacitors, all of which I replaced as usual. This took longer than expected because of the need to move other components to allow access to the soldered joints. Fortunately, the modern replacement capacitors were smaller than the originals, which relieved the congestion somewhat. Everything else looked OK so it was time for a test. I connected the set to a suitable battery eliminator and switched on. There was some signs of life, but I could hardly describe it as working. The sound was weak and distorted, but it did not sound like an alignment problem because the tuning was still fairly sharp. While poking looking for obvious faults around I happened to touch a low value capacitor, and the set sprang into life.

The capacitor was one of those flat plate types and it was actually broken inside the horrible sleeving! It was a good job I had the Trader sheet for the set as the capacitor was completely devoid of markings. According to the circuit it was 0.00005uF (50pF in real money) and was the IF filter in the detector circuit. A replacement soon solved the problem but why was it broken? It appears that it had been positioned right where it would be crushed between the chassis and a wooden block on the cabinet when the set was reassembled. And a quick check around revealed another similar capacitor, in an equally vulnerable position and in an equally broken condition, in the output stage. This was marked with the value (200pF) and agreed with the circuit diagram.

The set was now working fine with its chassis out, so I put it back together and tried it again. Horrible whistles when the volume was turned up. I carefully lifted the chassis out while the set was playing, and the noise went away. However, it was not a sudden thing, like a bad connection. It was more gradual, caused by the proximity of something on the chassis to something in the case. I moved the wiring to the aerials and output transformer around but this had no effect. In the end, the problem was caused by a component mounted in the case that I have not mentioned yet - the tone control selector.

Maybe "Tone control selector" is too grand a title for it! In reality it consists of a length of wire fitted with a small plug, which is inserted into one of two sockets depending on whether you want "High" or "Low" tone - "High" being normal and "Low" being muffled. In fact, only one socket is connected, the other is just a parking position for the plug. This circuit simply selects whether a capacitor is connected between the anode of the output valve and ground. The capacitor is mounted behind the socket, and connected into the circuit via a length of screened cable.

The screened cable was the clue to the cause of the problem. There is normally no need to screen signals at this level, particularly when they are only running a few inches. Since this set was obviously built as cheaply as possible, the screening would not have been due to a designer deciding to take extra care. The screening was actually there because the tone control selector was positioned less than one inch (25mm) away from the top cap of the triode amplifier valve. This top cap is the grid of the triode, which is connected to the volume control and is at high impedance. A high enough impedance to be affected by the large voltage signal from the anode of the output valve and on the adjacent tone control, thereby causing the instability.

The designers of the set had obviously been here too, hence the screened lead and the very short connections to the capacitor - clearly an attempt to minimise the amount of signal given off by the tone control selector. I checked all the obvious things, like the continuity of the cable screen, the condition of all the capacitors and resistors in that section of the circuit, and the grounding of metal components like the speaker frame. Still the same. After much head scratching and swearing I concluded that there was not a fault as such, and that I was battling with a poor design.

Time for a modification. My initial thought was to simply disconnect the tone control and forget about it, but I did not think my customer would approve of that. A piece of tin plate to act as a screen worked fine, but it was visible and looked wrong. So since I could not easily reduce the level of the interfering signal, I had to find a way of making the grid of the triode less sensitive to it. The fix was a 100pF capacitor connected between the grid connection and ground. I fitted this under the chassis, mounted conveniently between two tags on the volume pot. The capacitor did reduce the treble response slightly, but not enough that anyone would really notice. More importantly, it completely eliminated the instability.

Despite the poor quality of construction the set actually sounded very good (for a portable) when it was finished. No doubt, the large round Goodmans speaker had a lot to do with this.

What I cannot understand is why no one did anything about the problem before. The set is around 58 years old, and as far as I can tell, it must have been like this since new! Maybe people just used it at moderate volume (the problem only occurred with the volume well up). On the other hand, maybe the proximity of two batteries near the triode amplifier valve in the case was enough to calm it down? I do not believe the extended internal leads had any effect, because moving them around and handling them did not alter the instability in any way. Does anyone else have any ideas?