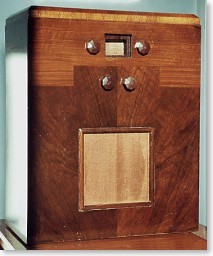 This Long and Medium Wave Superhet radio was designed to run from DC mains. It has no type number and the case is unusual in that most Pye radios of the early 1930s had sunburst speaker frets. The internal layout of the tuning assembly, in which the tuning condenser is chain driven from the tuning scale drum and the coils are in rectangular cans was similar to the Pye Model E/B, for which Paul has provided a service sheet on his CD-ROM. This gave me some clues as to the layout of the major components.

The valve types were very difficult to read. All were Mazda and those I could read had a 'DC' prefix, such as DC3HL. There was no reference to such valves in the Valve Data CD-ROM, but the Avo Valve tester manual indicated that there were very few types with the DC prefix. With these type numbers in mind, I managed to make out enough from the feint markings to identify the valves. The line up is now: RF stage DC2SGVM, Mixer DC2SGVM, Local Oscillator DC3HL, IF stage DC2SGVM, Detector, AGC and Audio stage DC3HLDD, Output Valve DC2Pen.

The radio had been simply converted to run from AC mains by means of an enormous metal rectifier and, to add great confusion, the RF stage had an output valve in it, with a butchered circuit. Clearly someone had been pretty desperate to keep it running at some point. Confusion was added by the fact that this radio has a separate local oscillator valve located in between the AF stage and the output valve. All this had to be worked out from scratch by circuit tracing, using my faithful Avo Model 8 on its resistance ranges.

The radio is enormously heavy and, to my surprise, has very heavy smoothing chokes and paper filter condensers in both the series heater line for the valves and the HT supply. Plotting the heater circuit alone, with its various chokes and filter condensers was an evenings work. Thinking about it, DC mains was probably heavily corrupted by noise from sparking generator brushes and commutation noise. The radio provides terminals at the rear for smoothed DC, presumably for powering other devices. The mains energised speaker takes the whole current from both the heater and HT strings and has far fewer turns on the magnet than is usual. Thank heaven it was OK.

Restoration was very difficult. Most of the HT supplies are individually decoupled for each stage and, as can be seen from the picture, the decoupling resistors and condensers are mounted on a board.

The condensers and resistors are fitted by wrapping their wires through holes in the board and I decided that the whole assembly had to come out to make a good job of restoration. A large number of parts had to be removed to gain access and many notes were taken of the connections which had to be separated.

This photo shows to component board as found. The capacitor card cases and labels were oil soaked from oil which had come out of one of the block paper capacitors. I cleaned them by spraying with Halfords brake cleaner, which is a powerful degreasing agent. A couple of sprays and wipes and you can see the result in the 'after' picture.

The paper condensers were all leaky and were rebuilt by melting out the pitch from the ends of the card tubes, pulling out the old guts and inserting modern 400volt polyester types. The resistors were OK and were repainted, just for fun. Other areas of the radio were very inaccessible and replacement of the cathode decoupling condensers for the audio stages required major dismantling.

I made up a simple mains converter using a high current silicon diode and a 100 + 100 mfd smoothing condenser, with resistive smoothing to bring the on-load DC voltage down to 240 volts. It runs a bit hot, but works.

The circuit for the bodged RF stage was a bit of a puzzle. I found resistors and condensers mounted in the area which would provide components for cathode bias and decoupling and a string of decoupled resistors including a rear-mounted potentiometer, which I figured to be an RF sensitivity control, acting by adjusting the screen voltage on the first stage.

I knew it would be tricky to get the set going, so I did not immediately refit the component boards, but left them on the bench connected by temporary extension leads. This was a good idea, because my notes let me down and I was uncertain of two of the connections. Of course, the photos I had taken did not show the critical bits. 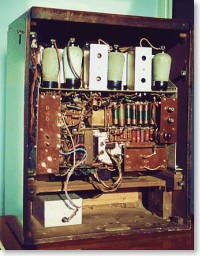 First test was to check the audio stages, so I connected a CD player to the 'Gram' input and wound up the volume. The sound was thin and distorted with hum. Prodding about, I found that pressure on the top cap (grid) of the audio amplifier triode increased volume. I finally found a broken connection inside the cap. Fortunately, there was enough wire still sticking out from the valve envelope for me to make a connection to the top cap.

The radio now performs on both Long and Medium wave and is reasonably sensitive. The sound is not great, but quite listenable.

I have been told that DC radios were used on board ship and I wonder if this obviously rare radio was used on board a liner in the thirties? And what would that spare filtered DC supply have been for?