According to the information on the service sheet, this set dates from 1945. It is a quite handsome LW/MW/SW table model for AC mains. Despite active service in a workshop and a lengthy retirement in a garage, the set appeared to be in reasonable condition underneath its coat of grime. There were no signs of earlier repairs. 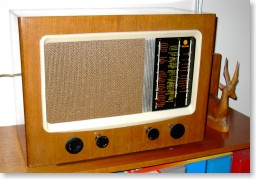 As typical of the period, the case is constructed of (walnut?) veneered plywood. The front is taken up with the cloth-covered loudspeaker baffle on the left and glass tuning scale on the right. An anodised aluminium strip separates the two, and an ivory plastic 'picture frame' surrounds them. Volume, tone, wave-change and tuning controls are provided in a row underneath. There is a cardboard cover for the back and a removable panel on the underside. No internal antenna or 'magic eye' tuning indicator is provided. Internally, the layout is spacious, thanks in part to there being one less valve than usual.

The electronic design of the front-end is very conventional, except that the detector diodes are contained within the output valve. There is no triode audio amplifier; the output valve is driven directly from the volume control. Despite the resulting loss of gain, the designers were still able to include some negative feedback from the output anode to the bottom end of the volume control. The switchable tone control is built into the feedback, and allows two levels of treble-cut and one of bass-cut. This is a neat idea, except that it cannot work if the volume control is set to maximum. There is a directly heated rectifier and energised loudspeaker magnet.

One cannot help wondering whether the pick-up input was of any use - about 20 V peak-peak would be needed to load the output stage fully. The audio from the detector diode is larger than usual, thanks to an increased delay voltage for the AGC detector. (This delay is developed across the cathode resistor of the output stage.)

Comments and Repair Work Carried Out

Otherwise the set seemed well designed. It gave a lively performance despite the lack of an audio amplifier stage. The appearance is good as well.