Colleagues donated this one; it had sat forlorn atop the kitchen cupboards at Bristol West telephone exchange for many years and was about to be thrown out. It was very dirty, and extremely dusty inside. Both tuning dial cords were broken and the tuning cursors missing, along with the set's back, so this meant a little detective work to obtain the model number. 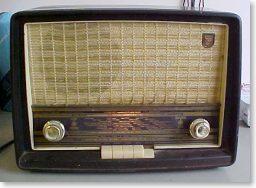 A length of white two core cable had been fitted which would have to be changed to 3 core, as this is an A/C only set. The usual pre mains checks were carried out, which showed nothing alarming. However the 50-50uF H.T smoothing capacitors gave no "kick" with an ohmmeter. Both sections proved to be open circuit, refusing to reform after several hours. The type used in this set are fixed by metal tags which pass through slots in the chassis and are bent over, one of which is soldered to the chassis to provide a connection.

As the faulty capacitor wasn't going to be used again three of the tags were broken off to aid removal. I think the replacement actually came from a tape recorder, but fitted the chassis perfectly. Most importantly however, this one formed up ok (on the bench BEFORE fitting of course! I've been there before, and got the T-shirt to prove it!) after about half an hour.

The set worked very well on MW and LW receiving plenty of stations with good volume. VHF was however absent, but for the background hiss.

On a hunch, both the EF80's were changed, which brought about instant improvement and Radio One, which just happened to be playing The Beatles " I feel fine". The guitars certainly sounded fine and there's no problem with volume or quality, despite the rather small speaker! Most of the voltages seemed to tally with the trader sheet and the EL84 grid capacitor, one of those black Phillips ones, was not at all leaky.

The trader sheet proved to be invaluable for this set, as the circuit is a little unconventional, (as regards VHF any rate) and the tuning dial arrangements are quite complex.  The set has two separate concentric tuning knobs, the inner for VHF and the outer for MW/LW. This requires two sets of dial cords, which run inside flexible metal tubes, a handful of pulleys and two tuning scale pointers. Both dial cords pointers and the guide tubes for the VHF cords were missing.

The directions on the Trader sheet are excellent, (the measurements of each cord are even provided) and threading a new MW/LW dial cord looked easy. Yours truly (sausage fingers) managed it in about an hour!  I am after all merely human and have only two hands!

Tim's Tip: The thin nylon string of the type used for kites is ideal for this task, if you have difficulty getting dial cord proper. It some times needs an extra turn round the tuning knob shaft though, the nylon not being so "grippy" as the original stuff. I have used it in several sets and have had no problems. 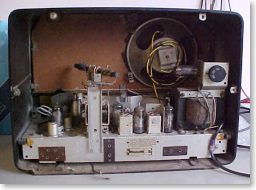 A new pointer was made from a piece of red insulated 0.9 mm dia solid core wire, which was formed into shape with two pairs of long nosed pliers. A little tweaking was required, but it is now accurate on the scale.

The repair of the VHF pointer system however will be a little more involved, as the cord guide tubes are actually missing and it seems very remote that any will ever turn up.

I have had a brainwave recently when at work; I was stripping back some fibre optic cable. The fibre elements run in a PTFE sheath about 3.5mm in Diameter with a 2.5mm bore. This tubing is quite stiff, and the slippery nature of PTFE means the cord should run through it nicely. The tube can be fixed into position on the chassis using the existing fixing holes with araldite, or more likely waxed twine, as this will probably grip the PTFE better. It might even be possible to tap a thread onto the outside and fix with two nuts-this will also provide a small degree of adjustment. Watch this space.

The tubes can actually be seen at the left of this picture, showing the gubbins of this set before case cleaning has taken place. It’s not authentic I know but it does get this lovely set working again, and  is not visible in normal use.

I will probably use this set to provide music (or more likely Radio 4) in my workshop. It can play away for hours without me feeling guilty about wearing out an ECC85. I also like the fact it has separate tuning for MW/LW and VHF, which means I can easily switch between Radio 4 and my local MW "oldies" station without having to re tune. What luxury!

The new mains cable was fitted, the L and N conductors soldered directly to the switch (which is possible-just!) and the earth soldered to a nearby chassis tag. It’s worth mentioning that at sometime in the past the speaker wires had been touching the EL84 output valve and the insulation damaged. The wire beneath had corroded and actually broke while manhandling the chassis. I didn’t notice at the time and was dismayed by the firework display inside the output valve upon subsequent switch on for the next test! I was also having problems with the volume varying for no apparent reason. This fault hasn’t appeared since both wires to the speaker were renewed, so was probably down to this corrosion. The mains cable and speaker wires are routed quite close to the output valve so these were tied to the chassis with waxed twine (which always looks more authentic than a cable tie) through some handy holes. A rubber sleeve had to be fitted over the sheath of the main cable to ensure the mains strain relief gripped properly.

The knobs, “piano keys” and tuning scale were cleaned up with some “Grimex” wipes, which also shifted most of the dirt on the case.

With the chassis playing away on the bench, all metal fittings speaker board etc. were stripped from the Bakelite case which was then scrubbed in warm soapy water. There is a piece of metal foil glued to the inside floor of the case, acting as a screen, so don’t soak it too long!

Once dry it was polished in the usual way with "Brasso" which brought up the pleasant mottled effect of the Bakelite.

I have no back panel for this one, but as I will be the only person using it, and it will be out of reach of my 4 year old daughter this will be ok.

Another good performer from Philips.