This "Recent Repair" was kindly contributed by Jeremy Stevens.

The Philco A1 is a conventional four-valve (plus rectifier) Superhet and was relatively inexpensive when new. American "Loctal" valves (all with an "E" suffix) are used and the circuit design is pretty basic. One curious detail is that the suppressor and control grids of the 7B5E output valve are strapped. Physically, the set is very compact and there is no spare space anywhere on the chassis making it difficult to work on. 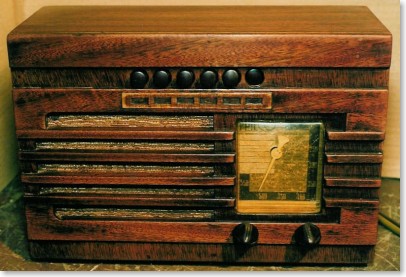 Therefore, the question arises "why bother undertaking such a time consuming task?" For me, in this particular case, the reason was purely sentimental, as the set had belonged to an engineer friend of mine, Harvey Bedford, who sadly died suddenly last year and had worked for Philco between 1939 and 1951. Back in the 1970s, as a youngster, I used to spend hours working on various electronics projects in Harvey's workshop and it was there that I first noticed the A1 tucked away and out of use in his workshop. This particular A1 had an interesting history; being built in the Wadsworth Road, Perivale (west London) factory of Philco in 1939 it later reappeared in the repair workshops in 1942 with the Bakelite case damaged beyond repair. The set was written off and left in the workshop where Harvey worked. He arranged for Samuel Taggart, a craftsman cabinet-maker who worked in the prototype department of Philco Radio, to make an exact replica of the Bakelite case in wood. This is probably the only example of a "factory made" A1 (albeit unofficial) in a wooden cabinet.

The set had not suffered the ravages of time particularly well in both the chassis and cabinet department.

With the set removed from its cabinet it was immediately obvious that the loudspeaker was in a dreadful state of decay, Harvey had tried to repair the disintegrating cone with silicone sealant but this had not halted the degradation process. The chassis, despite being of relatively simple construction, had had many components had been changed and modifications made. Not a single original paper capacitor remained and only a few resistors were original. These were of the carbon rod type common before the war. The rectifier had been replaced by a BY100 silicon diode, a common practice during the 1960s, and the 7B7E variable mu IF valve had been replaced by a 6BA6 B7G type. Luckily, I had some the correct "Loctal" valves in good condition, but the first problem was to find a B8G valve socket so that the original IF valve could be reinstated. My friend, Leon Crampin, came to the rescue with the valve socket which fitted perfectly and was riveted in position using the original chassis holes. The next problem was with the internal wiring. The woven cotton insulation of the heater wiring crumbled when it was disturbed and I ended up having to rewire the whole heater circuit with the result that the energised speaker had to be removed in order to gain sufficient access to the chassis.

A routine check with an ohmmeter showed that the magnet/choke coil of the loudspeaker was open-circuit. This was a disaster as the speaker was a very special 4" unit specially made for the set and repair, if possible, was the only option. In order to remove the magnet coil the cone had to come off and this crumbled to dust as soon at it was disturbed. The suspension was intact but the paper former of the voice coil was also in an advanced state of decay leaving the coil unsupported. The central pole-piece was pressed out on a wheel press, allowing the magnet coil to be slid out of the frame. Once the 16-turn hum-bucking winding was removed the magnet coil terminations were exposed. Unfortunately the break turned out to be in the wire to the innermost winding. The magnitude task was multiplying rapidly. I did not want remove and rewind the coil so decided to try a different approach. The coil bobbin was paper and I managed to remove one side cheek and expose the winding. It was then possible to fish a loop of wire out from close to the first layer of the winding. The side cheek was replaced and locked in place with wax. The terminations and bucking coil were reinstated and I was pleased to find that the coil was only about 10 ohmsbelow its nominal value. Problem no. 1 solved, but what about the cone?

After much experimentation, I discovered by chance that a 4" Visaton driver available from RS Components (431-8440) could be used. The cone angle, diameter and voice coil were almost exactly right to replace the original Philco unit. It is tricky to dismantle the Visaton driver without damage (I had success with the second example) and a lot of patience is required. I started by heating the magnet with a hot-air gun and then cracking in a vice. This enabled the back end of the speaker to be removed exposing the voice coil. Using tin snips, I then cut round the mounting flange removing the lip. This allowed side access for a scalpel thus enabling the outer suspension to be separated from the frame. Next, much of the remaining frame was cut away so that the inner suspension could be treated in the same manner. Eventually the cone was free - Photo #1. Required for supporting the inner suspension, the remains of the Visaton inner frame were prepared for mounting on the original Philco frame - Photo #2 & #3. As the Visaton voice coil was slightly smaller in diameter, around 0.2mm had to be turned off the pole piece in this area - Photo #4. This would slightly reduce the efficiency of the loudspeaker, a small price to pay under the circumstances!

With the magnet coil back in position and retained by the modified pole piece pressed back into the frame, it was time to fit the cone assembly. The pigtail terminal holes were cleared of solder to reduce the chance of a sideways thrust pushing the voice coil off-centre. The mating parts of the inner suspension and inner frame were coated with Evostick impact adhesive which was only allowed to dry for about a minute before easing the cone into place. This operation was tricky as centralising the coil was essential to prevent distortion caused by rubbing. An improvised weight was used to hold the cone fully home and the adhesive left to cure overnight - Photo #5. The outer suspension was glued into place the next day using Evostick again and the assembly left a further 24 hours. When the weight was removed the speaker it was clear that cone was clear of the pole-pieces as its motion was smooth and free. The speaker was then hooked up to the receiver with long wires and everything tested.

Judging by the whistle from the speaker as the A1 warmed up, it was obvious that something within the RF circuit was unstable. Waving a hand around the 7B7E IF valve changed the pitch of the whistle and I soon discovered that the valve's internal screen on pin 5 (not shown on the circuit diagram) was not grounded and a link resulted in a functional, if low sensitivity, set.

After aligning the IFs and RF & Oscillator circuits, which were way out, a reasonable output was obtained on Medium wave with a short length of aerial wire and the repaired speaker worked well. Long wave sensitivity remained poor without a long-wire aerial.

The A1 is really compact and compromises in the design have been taken to save space. For instance, only the 1st IF transformer is in a screening can, the 2nd IF is open and under the chassis and the tuning capacitor moving blades only just miss the 7B7E IF valve. Photo #6 shows the chassis rear view and photo #7 the front view with the repaired speaker.

Space restriction meant that the A1 could not have an isolated chassis by means of a mains transformer. The RF circuitry is all referenced to chassis with coupling to mains neutral being provided by C5. For some reason, Philco have drawn the main switch in the neutral which means that the set would not be fully isolated from the mains if wired in accordance with the drawing. I decided to replace the frayed cotton covered rubber insulated mains cord with a three-core PVC type and wire the switch in the line side of the mains. I found that directly wiring the mains earth to chassis caused an AF hum to appear due to the presence of around 2V AC on the neutral line with respect to earth. This was cured by wiring a 50V VDR in parallel with a 1nF capacitor in series with the earth lead. I also found by accident that the set produces a loud hum and no audio with reversed line and neutral connections. This point is specifically mentioned in the "Trader" service sheet for the A1.

The lack of a current limiter for the 7Y4 rectifier is bad practice so a 100 ohm 2.5W resistor was added in series with the cathode in order to limit the peak current and hopefully extend the life of the valve.

The wooden cabinet had been treated with a hard varnish that had shrunk and cracked with age. It was hard to remove, particularly from the detail of the fretwork and I did not want to resort to a paint stripper as this would necessitate washing the cabinet and possible destroying the glued joints. In the end, a combination of fine glass paper and careful scraping with a scalpel was used. The bare wood was then treated with "Tops" scratch cover to darken the finish and then many coats of wax polish were applied daily over a week. The result was quite acceptable as the photo at the top of this page shows. I am glad I made the effort.