This set is a wooden cased version of the more common U502, a photo of which is on the Murphy page. Electrically the sets are identical. I obtained this set, and another U502, from the NVCF in April 2000 for £5 each.

The set was complete, but the cabinet was rather sad. Some of the varnish was flaking away from the top of the cabinet, and there was a small drilled hole where a previous owner had fitted a telescopic aerial. Clearly the cabinet would require refinishing, but the first job was to tackle the electronics. Disassembly was straightforward.

I thought I took a photo of the set before work began, but I cannot find it now! The photo below shows the set after restoration. 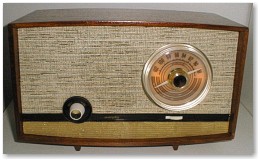 As usual with later Murphy sets, the full service data was limited to Murphy dealers only. The Trader sheets etc. did not seem to carry many Murphy sets, and often the only source is the Newnes Radio and Television Servicing books. This set is in the 1959-1960 volume, and as usual only a circuit diagram is provided because this is all Murphy would release.

From a quick look over, the chassis appeared to be in good condition so I decided to power it straight away, via the lamp limiter. Nothing. A check with a test meter across the mains lead showed open circuit. Further tests showed that this was not due to the mains switch or dropper resistor (the usual candidates). The heater of the 10D2 valve (double diode) was open-circuit. I did not have a spare, so I borrowed the valve from my U502. Upon closer examination I found that the Hunts Mouldseal 0.01uF capacitor across the heater of this valve had been melting, due no doubt to the application of 240V AC to it due to the valve fault (the capacitor was rated at 150V DC).

I fitted a replacement, and also replaced five other similar capacitors that were cracked and showing signs of falling to pieces. I also replaced the remains of the wax-paper capacitor on the tone control switch. This is connected in the output valve anode circuit so needs to be rated at no less than twice the HT supply voltage. I used a 630V component, which is ample on a set with an HT supply at just under 200V.

Time for a second test. Much more promising. The set worked fairly well at the high frequency end of the band but not at the lower frequency end. However the set was still running from a reduced supply due to the lamp limiter. With the lamp switched out, the set worked right across the band. However the sound quality was somewhat distorted, and gradually getting worse. I checked the voltage on the grid of the output valve. 14V. The grid coupling capacitor had been replaced by a previous repairer some years ago, and was a grey moulded RadioSpares component. I had assumed this would be OK, but in fact it was leaky despite having no visible cracks or blemishes. A replacement solved the problem, and the set now worked very well.

The cabinet is made from plywood and as I mentioned earlier needed refinishing. The original varnish was fairly thin and brittle so I decided that chemical stripping would be excessive. Coarse sandpaper and some effort was all that was required. However the strain and vibration from this caused some of the cabinet joints to loosen. I decided that the best approach would be to take the cabinet apart (a relatively easy job) and sand each section separately. Once the varnish was removed I smoothed the sections with some medium grade sandpaper.

The cabinet was then carefully reassembled using EvoStick woodworking glue. I did not have any suitable clamps so I held the cabinet together with masking tape. This tape will stretch slightly, which holds the joints tightly together while the glue dries. A couple of lengths of tape fitted diagonally ensured the cabinet remained square; this was confirmed by measuring and comparing the diagonals.

After 24 hours I removed the masking tape. I filled the inevitable small gaps in the corners, and the offending hole in the top, with the wood filler, taking care to smooth it off flush with the cabinet. I found it necessary to cover the hole on the inside of the cabinet with masking tape, to stop the filler from falling through.

Despite my efforts the filler was a bit uneven, so once it had dried (24 hours) it was carefully flattened with fine sandpaper. I also sanded the whole of the cabinet with this sandpaper, then wiped it over with White Spirit to lift the grain, then sanded it again and wiped it again. I then applied the wood stain with a clean lint-free cloth, as instructed on the tin, and left this for 24 hours to dry. 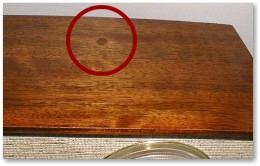 I then rubbed the cabinet with a clean cloth to remove any surplus stain, before applying the first coat of varnish. I used Plasti-kote spray polyurethane varnish. I fitted long screws in the back mounting holes so that the cabinet could be laid on its back without the wood touching the ground. This allowed all the necessary surfaces to be sprayed without moving the cabinet. The spraying was done outdoors on a warm still evening. It is worth practising with this product on a piece of scrap wood, even if you are used to using aerosol paint. It is quite tricky to apply sufficient varnish to get a smooth finish, but not so much that you get runs or sags – particularly when spraying vertical surfaces. Hence the practice on scrap wood first!

The manufacturers of the varnish recommend respraying after 24 hours, but the surface still felt slightly soft so I decided to leave it longer. The following day I wiped the cabinet with White Spirit and applied another coat of varnish. Again I waited two days for it to fully dry before handling it. With this sort of job it is worth being patient – trying to rush the job will lead to disappointing results. Two coats was sufficient to replicate the original depth of finish on this cabinet, but further coats can be applied at suitable intervals if required.

While waiting for the cabinet to dry between operations I had cleaned the knobs, front trim and the chassis. I also replaced the mains flex. Fortunately, reassembly was uneventful, and the completed set worked well.

As you can see from the photo, the filled hole in the top is not that visible. It looks a bit like a wood knot, and does not look at all out of place. Luck must have been on my side this time, because previous attempts to repair this sort of damage were much more visible.