This is another set where things were done rather differently, but this time we can speculate as to the reasons behind them. I am referring to the valve line-up, which includes devices having three different base styles, two different heater requirements and two different numbering families. Murphy generally used Ediswan-Mazda valves, and they did in this set except two were almost certainly rebadged Mullard devices. 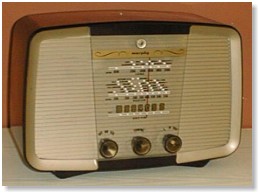 Starting at the front-end we have a UCC85 (the first rebadged device, notable by the Pro-Electron type number), 10C1 and 10F9 (B8A based frequency changer and IF pentode valves respectively), EABC80 (yes that is an 'E' on the second rebadged valve), 10P14 (an Octal based output pentode) and U404 (a B8A based rectifier equivalent to the UY41). Why the odd mix? I do not know for sure (maybe someone can enlighten me) but I have a couple of ideas.

The set was made in 1955, only one year after VHF broadcasts began. So designers were still getting to grips with the circuitry involved, and it is likely that some valve manufacturers were ahead of others with suitable devices. From the line-up in this set it would suggest that only Mullard had the VHF-double-triode and the triple-diode/triode devices needed, while Ediswan-Mazda hadn't even produced their own range of B9A based valves yet. Therefore, they had to make the best of their current products, and add in Mullard devices to fill the gaps. If this was the case, I can imagine the engineers at Murphy cursing their company's commitment to Ediswan-Mazda, since many other set manufacturers were using all Mullard B9A devices.

But why the odd choice of heater ratings? The EABC80 heater requires 6.3V at 450mA while the rest are all 100mA series heater devices. Maybe a clue comes from the way this lot are driven. The set contains an autotransformer, a 6.3V tapping on which drives the EABC80 and the dial lamp. A higher voltage tapping drives the remaining valve heaters in series via a 195-Ohm series resistance, and the 250V tapping provides the feed to the rectifier for the HT. Maybe Murphy had a load of these transformers left over from a previous set and wanted to use them up? I do not believe they were designed specifically for this set, because if they were the tapping for the series heaters would have been at the correct voltage. In this set there is 195R of resistance in series (two 390R resistors in parallel) which drops nearly 20V. I can see no logical reason to design a transformer with the output voltage too high, then drop the excess with a resistor. They could not have used a UABC80 in the series heater chain, in place of the EABC80, because the heater is 28V, and they only had 20V left over. On the other hand, maybe someone got the transformer specification wrong, or one of the valve types was changed, so they had to make the best of what they had? As I said, this is only speculation. All alternative suggestions are welcomed.

Several wax-paper capacitors were looking rather the worst for wear, so these were replaced along with two Hunts Mouldseal capacitors, which had cracked bodies. There were several more of these capacitors, but the rest looked OK and some were rather inaccessible so I decided to leave them for now, and only replace them if it proved necessary. Both the low voltage electrolytics looked rather sad, and proved to be almost open-circuit, so they were also replaced. One (the output valve cathode bypass) was originally mounted on the top of the chassis, but the replacement was much smaller so I fitted it underneath instead. This capacitor is not shown on my circuit diagram, so is probably a later modification. The HT smoothing capacitors tested OK.

All the valves appeared to be the originals, so I decided to try the set with them, rather than testing the valves first. This proved to be a good move, as the set worked fine on MW and LW straight away. A shot of contact cleaner on the wavechange switch dealt with the crackling when changing wavebands. However, the VHF band was totally dead. From experience I know that there is not much to go wrong, so I tried a new UCC85 valve, which restored normal operation. Clearly those Hunts capacitors I left were OK too, as the set now worked very well on all bands.

However, I did feel that the sound was rather shrill, particularly on VHF. The tone control is just a two-position switch on the rear of the set, and in the other position the sound was rather muddy. This is not intended as a criticism of the set, which was obviously designed for broadcasts that were quite different than they are today. However since the set will be used to listen to today's broadcasts, a small modification was called for to make it more acceptable. I am aware that some collectors will disapprove of such modifications, but I feel it is not a problem providing it can be easily reversed in the future.

To illustrate I have included a small section of the circuit diagram here, showing the triode section of the EABC80 and the 10P14 output pentode. In my set, there was a 50uF capacitor in parallel with R28 (in the 10P14 cathode circuit) and an extra 39R resistor in series with the pair. R39 was 3K9. S3 is the tone switch, and is shown in what I would call the "shrill" position. In this position, it provides a negative feedback path from the output valve cathode circuit back to the bottom of the volume control. C70 removes the negative feedback at higher frequencies, hence the shrill sound. By removing this capacitor, the frequency response is much more even as the negative feedback operates over the whole frequency range, and the sound quality is improved. The sound in the other setting of the tone control switch is almost unchanged from how it was before the modification. I listened to the set on various stations on all wavebands with and without C70, and decided that the modification was worthwhile in making the set more suitable for use in the 1990's.

I recently received the following interesting comments from David Grant:

You speculate on the mix of valves in the A372, I can confirm that Mullard were ahead of the other UK manufacturers in the VHF game - as part of the Philips organisation they had the benefit of several years of development of VHF receivers in Europe!

Murphy always used Mazda valves if at all possible. They signed an agreement to use Mazda valves in 1932. The advantage to Murphy was that they had access to pre-production prototype valves so they could get a head start with their development program...

David also informs me that the set was in fact released in February 1957. It is a (slightly) updated version of the A362 which looks almost identical and was released in 1955. Both have a remarkably similar circuit!

I received the following information from Leon Crampin:

I have just restored a Murphy A372 and noted your "recent repairs" feature in which you were wondering about the weird heater supply arrangements on this set. If you do the arithmetic, the fitted transformer is dead right without additional ballast for a UABC80 detector/AF amplifier + a UY41 rectifier. I suspect one of two things went wrong. 1) Philips would not release the UABC80, only the EABC80. 2) Murphy "forgot" that in a set with series heaters, the AF amplifier heater has to be at the earthy end of the chain to give minimum hum. Unfortunately, their VHF assembly, first used on the AC sets, earths the double triode heater (as it should in an AC only set) thereby preventing this. The solution was to have two valves (UCC85 and EABC80) with earthy heaters, fairly easy with the fitted autotransformer, and to fit the Mazda U404 which favoured their preference for Mazda valves, and resulted in less heater ballast. I suspect cock-ups were alive and well in 1957.

The set works well, I note your thoughts on the AF amplifier feedback network; I'll try this when I next take the chassis out. My set sits on my desk, but the inbuilt 'speaker is so poor that I use a more decent external LS with better results.