This set was one of the Murphy 1957 range. The model was available as the ordinary table type (A272) and the baffle. The baffle set was basically a big board with a radio on the back, and this being a Murphy it's a BIG board. The picture alas gives no idea of size, but if you imagine that the speaker is 12”across it gives you some idea. (Thanks to Dave Grant. Check out his excellent website for all things Murphy).

It must have sounded great in the showroom! 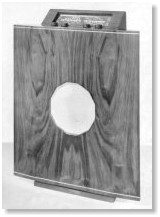 This one was “rescued” from a skip by one of my colleagues at Eastville Telephone exchange (In Bristol) and I was asked to look at it to see if it was possible to get it working for use in the tea room.

The case wasn't too bad, just a few worm holes here and there, and apart from a joint in the mains cable the set appeared complete. The back was removed and all the spiders brushed out.

The usual pre mains checks revealed nothing alarming, although the mains tap was set to 220v. The mains plug was old but OK and fitted with a BLUE 3A fuse (remember them?). As this set was mostly being repaired at work, in lunch breaks, I couldn't carry all my test gear round with me. Normally I would use a variable HT power supply connected to the cathode pin in the rectifier valve socket to reform the capacitors. This was not available so I had to use the supply in the set and a meaty 100k-ohm resistor.

The chassis needed to be removed from the set for access to the terminals of the HT capacitor, and this operation was a bit fiddly. The output transformer is screwed to the case and connected to the rest of the set via flying leads which are just long enough for you to remove the chassis, turn it over and rest it somewhat precariously on the back of the set. I insulated it from other parts with thick cardboard. A couple of cable ties stopped it moving. With the mains tap at 240v the set was switched on, and after a short time all valve heaters glowed and the voltage on the HT cap began to rise. Until it reached 150v, and increased no more. I left it for a while and then connected the rest of the set. There were no funny smells or anything getting hot, so I pulled the output valve (in case the DC blocking capacitor was leaky), and burnt my fingers. It was red hot!! (That capacitor was replaced, along with the only other wax paper type in the tone control circuit that also proved leaky.) This made no difference to the HT so it looked as if I may need the drawing after all. Amazingly the set worked (on MW and LW at any rate) with this low HT, but of course it wasn't very loud. I hoped VHF would work when the HT was correct. At this point I didn't have the drawing for the set but I was pretty sure that 150v was a bit low!

The set was switched off and a check made on the HT rail to chassis with an ohmmeter. It seemed reasonable, as did the HT caps. I wondered if the rectifier had gone low emission (not unheard of-especially for this valve type). As I didn't have a spare and no valve tester at work, the cathode of the rectifier was isolated from the set and a 15w “Pigmy” bulb connected between it and chassis via the current range of the multimeter. This provided a load of around 65mA, about right for the set and well within the rectifier valves capabilities.

Upon switch on the bulb glowed rather dimly (a current of only 20mA was flowing, although the input to the rectifier was healthy) from which I concluded the valve was well past it’s best. The leaky capacitor on the grid of the 6P1 had turned it hard on and caused it to draw far more current than usual. This probably contributed to the rectifiers demise. The 6P1 is quite a powerful valve, and seems not to have suffered. (As far as I know the 6P1 was only used in a few Murphy sets. It’s a big beam Tetrode, with the pin-out the same as a 6V6GT. As an experiment I tried a 6V6 and it worked perfectly-though it wasn't quite so loud. So it's worth remembering if ever you come across one of these sets with a duff 6P1.)

As budget was virtually non-existent for this set (as was my stock of EZ40's) I decided to replace the EZ40 with an EZ80 (of which I had lots) and this meant a change of valve base. The EZ40 is mounted on a little bracket screwed to the mains transformer, the bracket had to be removed and the old base carefully unsoldered. The B9A base for the EZ80 was the same size as the existing one, so the hand drill was used to drill out the rivets and the new one fitted with 6BA screws, nuts and crinkle washers. The socket had to be soldered before it was remounted owing to the length of the connecting wires.

This done I was rewarded with a 250v output into the pigmy lamp. The HT caps were connected back on and the reforming process on the HT caps continued until going home time, when DC voltage on both sides of the 100k-ohm resistor was virtually equal, indicating hardly any DC current flowing (just what you want!) and an HT of around 250v DC.

The next day the rest of the set was connected and the output valve refitted. After switch on the set worked well on MW and LW at good volume without an aerial. VHF however was still not working; there was hiss but no stations. I suspected the 6L12 (ECC85) might have been low emission, so it was changed for my only other working example, borrowed from my perfectly working Bush VHF61. Things were slightly better now; the hiss seemed to change in pitch slightly as the set was tuned.

The voltages round the ECC85 were measured, the anode of the RF amp (V1a) reading 10v. All other voltages were correct-spot on in fact! The usual suspects were checked including the anode resistors (R1, R2 & R9 resistor in the ht line). The "Hunt's Mouldseal" HT de-couplers (C5, C6 &C13) were also checked as best I could with the meter, none were short circuit. While testing the set burst into life whenever the meter was connected to V1a anode. I decided to measure the anode current flowing in V1a and was surprised to find it was about 10mA, the figure given in the Mazda data book for the valve . Curiouser and curiouser……

This one had me well and truly flummoxed. I left the set alone for a while but the chaps at Eastville started to nag about the set, as it had now been three months! Time to call in the experts. I posted a desperate plea for help on  Alan Lord's vintage radio forum (just part of his fab site). Alan himself answered my plea and a real gent he is too. He suggested that I tried substituting new capacitors for the de-couplers. I also noticed that when C7 was disconnected the anode voltage rose to normal on V1a. The capacitor was changed for another of similar value, but the fault persisted. I decided to follow Alan's advice and change the de-couplers starting with the one on the anode of V1a ( C13), which was replaced with 1000pF/400v (all I had in my junk box at work). Hey presto! The set worked perfectly on VHF bringing in stations with good quality and volume, and was left to test for several hours. (THANKS ALAN) He also suggested that I might be able to use an ECC88 to replace the faulty valve in my set. This proved to be the case and the set worked quite happily with the ECC88, allowing me to put the ECC85 back in my Bush.

Looking back it seems the open circuit de-coupler caused parasitic oscillations on the Ht that affected the meter reading. Next time it would be worth looking on the ht with a scope. I have another Murphy(A482) that is also unstable on VHF, this time in the audio range, and I suspect it too could be caused by a similar problem. The circuits of the sets are very similar and both use those horrid Hunts capacitors.

All repairs complete, the tuning scale was given a clean, the case treated for woodworm and a new 3-core mains lead fitted. The existing one although original had a taped joint in its length and was quite short. Nearly a metre is needed just to get out of the case! A full restoration was not carried out due to time and budget restraints. As the set was likely to have some heavy use this seemed sensible.

The set is now happily working in the tea room at Eastville telephone exchange.