I emailed Pete with some queries about the Microsonic I had obtained on eBay, as he has experience of repairing these sets.
He very kindly offered to repair my set for me, and sent me this description of the work.
Pete has more details about these sets on his website at http://hometown.aol.co.uk/PeteRoberts007/microradio/yura.htm 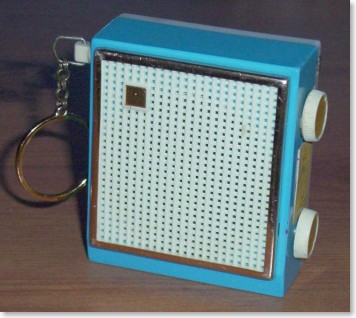 Technical and Optical Equipment of London, then sole UK suppliers of Soviet radios and cameras, imported these little radios from Russia in the late 1950s. T&OE was also reputed to be the main UK headquarters of the KGB, but maybe that's another urban myth!

However, in a little twist of the Cold War tale, some of these sets were badged "Microsonic", marked "Made in Hong Kong" and imported via the Crown Colony. Was this Cold War politics, or just a dodge to avoid paying import duties? Later, during the mid-Sixties, a large parcel of these turned up corrosion damaged through poor storage, and were sold for a whole £1 each as non-workers for "spares or repair" by Electronics (Croydon) Ltd., a major surplus emporium run by the erstwhile J.N.Bull.

The radios came with two sets of 125mAH NiCad button cells and a mains charger capable of charging one set at a time. A fully charged set of batteries was expected to last around six hours depending on volume. The charger used a capacitive "lossless" dropper rather than a transformer, and had a nasty habit of exploding! Needless to say the batteries are of a completely odd size with no British or European equivalent.

For what is at first glance a novelty radio the design is quite sophisticated, using six germanium transistors in a single band superhet circuit. There is even provision for connecting an external aerial. Two alternative IF frequencies were used: 455kHz or 470kHz, with bandpass tuning between the mixer and 1st IF stage. The audio stages comprise of a pre-amp, driver and transformer coupled balanced push-pull output stage, with some versions having negative feedback. Considering their size, these little receivers give a very good account of themselves and are exceptionally sensitive.

When confronted with a non-working specimen, the first task is to ensure that none of the wire links or ferrite rod aerial connections are broken. Next, replace all of the electrolytics, which will be very leaky if not completely short-circuit. These are usually of just three values: 0.5uF, 5uF and 10uF, at 3v or 6v working depending upon the part of the circuit they are situated. I use tantalum bead types for replacements, partly down to the miniscule size, but also because low-value conventional electrolytics tend to deteriorate when run at just a volt or less. The nearest E12 values are 0.47, 4.7 and 10uF respectively. 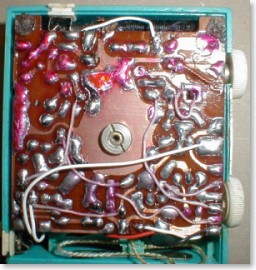 In the present example, an electrolytic transplant still wasn't enough - silence reigned supreme. After checking that the decoupled "HT" and bias voltages were correct I tried disturbance testing: stabbing at various bases and collectors in turn with a small screwdriver while touching the blade with a finger. Using this method you should be able to hear RFI, atmospherics or even strong local stations at increasing volume as you work back towards the mixer. This revealed the first IF stage to be faulty. Incidentally, for reasons of safety, this method of testing must only be used on battery powered transistor sets - NEVER valve radios.

A replacement transistor from a donor set restored full operation. When troubleshooting this type of radio, if disturbance testing doesn't reveal the problem, then it's easiest to use an oscilloscope, tracing the signal forward from the mixer.

If an original transistor isn't available, then any suitably sized germanium device, such as an OC45M or AF127, will do the trick. Likewise, a faulty audio transistor can be replaced with an AC125 or 128. Other causes of failure are dry joints and broken wires inside the coil cans. Some of the component leads are very short and only just protrude above the PCB tracks. Open circuit coils will be a problem unless a donor "chassis" is to hand, or the break can be seen and repaired.

Finally, although the original batteries will have long since failed, these radios can be powered from two AA cells in a holder connected to the battery springs using croc-clips - although the set may be a little unstable running on 3 volts rather than its rated 2.4. Alternatively modern NiCad or NiMH button cells could be used with some packing to hold them in place.

I have now received the repaired radio and had an opportunity to play it from an external 3V power supply. The sound quality is surprisingly good for such a small radio - it is considerably better than many of the far-eastern pocket radios from the same era.

The tuning knob drives the tuning capacitor directly so has only half a turn of operation against a "tuning scale" with just three markings. Due to the excellent sensitivity and AGC, all stations come in at about the same level so it can be a bit difficult locating the station you want.