Someone who clearly had more enthusiasm than ability had previously rebuilt this particular amplifier! He had also stripped the original finish, leaving a bare metal chassis (this picture is of an original amplifier, and was taken from a Leak publicity leaflet). Fortunately, it came with a circuit diagram (just about legible!), which confirmed the multitude of incorrect component values. 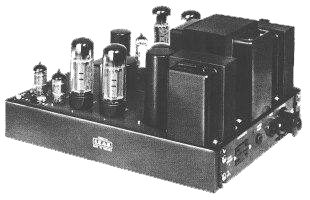 These had clearly caused excessive hum, judging from the additional electrolytics dotted around the place. Most worrying was that one of these, across the HT supply, was backwards. Amazingly, it had not exploded, and instead it was just open circuit.

The reason for the hum became obvious as I worked my way through looking for incorrect component values. The resistors in the two anodes of the phase splitter circuit were wrong (they should be 180K and 200K but 680K and 100K had been fitted); giving an imbalance that therefore would not reject supply noise as it should. It would also give more third harmonic distortion, which would be even more pronounced because the negative feedback resistor was the wrong value too! I could continue, but I think you get the general idea.

Fortunately, despite all this, all the valves except the rectifier were OK. The original cathode resistors for the EL34s were long gone, and the existing replacements were inadequate, so I fitted four of those nice gold heatsink cased resistors on the top of the chassis, with holes in the chassis at either end of them, fitted with grommets to take the wires. I used a fifth one for the HT decoupling, taking extra care with the insulation.

The paint on the transformer covers had been stripped, and some had been sprayed black. I removed them all and resprayed them silver, which looked much tidier against the bare metal chassis. I also sprayed the new LCR electrolytic cans the same colour, as blue stood out like a sore thumb!

The speaker outputs connectors had been replaced with some strange multipole signal sockets, which were hopelessly inadequate. The only thing I could find to fit over the holes in the chassis were spring-release speaker terminals from Maplin. Not audiophile gold-plated binding posts, but much better than what went before.

Once it was finished, I hooked it up to my Technics CD player (via a volume pot) and Kef Coda 7 speakers. It certainly had plenty of punch, but for clarity and detail, I think I will stick with my modern Rotel transistor amp. The Leak is a "big" amplifier and would be much better suited to big speakers in a big room.

I would like to thank to John Sweet in Australia for clarifying some details about this amplifier, and for sending me some technical information and the picture shown above.

Since publishing the above information I have been discussing this restoration with David Simpson in Australia. He is in the process of carrying out a similar restoration and made the following interesting and valid points.

The original cathode resistors for the EL34 output valves were rated at 440R, but in my repair I used 470R, as these were the closest readily available value. Although this gave no problems, David intends to connect 6K8 resistors in parallel with the 470R resistors to bring the total close to the original 440R. The power dissipation in the 6K8 resistors will be minimal so he will be using 1W components fitted below the chassis.

David has read that the original 100R HT decoupling resistor was deliberately rated close to it's limit so that it would fail in the event of another fault causing excessive HT current drain. This protects the valves and output transformers from the effects of prolonged overload. It would be difficult to duplicate this effect with modern replacements, as they are better able to withstand overloads and would be unlikely to fail in the same manner. We feel that the best approach would be to connect a 315mA or maybe 500mA anti-surge fuse in series with the resistor. The anti-surge characteristic will prevent it blowing as the smoothing capacitors charge, while the current rating is low enough that it will blow in the event of a fault.

Since David's chassis is still painted, we feel that it would be better if he spaces the power resistors away from the chassis to prevent the heat from softening or discolouring the finish. A couple of M2.5 or 6BA nuts should give sufficient gap.