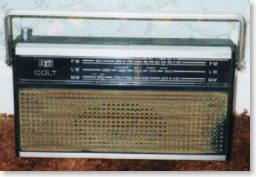 I bought this little portable radio new for my 15th birthday back in the good old 70's. Although many will consider this not to be vintage it is nearly 28 years old.

Made in Hong Kong and part of the popular ITT range of portable radios available throughout the 70's. It is a small neat little portable set using 9 transistors of far eastern origin, is driven by four AA cells and covers Long & Medium wavebands plus FM. All the transistors are silicon; the main feature is a completely transformerless output stage using just 3 transistors.

This set despite its size does give a good account of itself with reception on FM being impressive. For these reasons, plus the fact that it was my first real tranny portable, I got quite attached to it, and stuck with it through its many battles for survival.

I noticed from new that there was a strange varying background hum when powering it through a mains adapter and also that the battery life was really short. A year or so later with some experience as a trainee television engineer behind me I decided to take a closer look. With the help of the service sheet that came with the set I soon found that the output transisters were leaky. As they were rather strange transistors: Driver LM1410K, Outputs LM1404 and LM1403, no suitable equivalents could be found and I challenge anyone even today to find any, I placed an order with ITT, within a few days the parts were at home and a few days later they were fitted. This process was repeated over the next few months twice due to problems with the battery eliminater, i.e. incorrect voltage or polarity, as I was also using the same battery eliminator to run a cassette recorder.

Despite taping over the DC socket and triple-checking the DC running conditions the output stage still blew after only 18 months. This time I it was make or break so I experimented with different combinations of transistors that was available to me. The best results came with the 9th attempt using BC327/337 transistors with IN4148 as forward bias diodes, this lasted for a week with a battery life of less than an hour with both the output stage and batteries running so hot they almost melted the rear of the case and the battery compartment lid. Towards the end the idle current was measured at 1 amp.

So another order to ITT for correct transistors and diodes plus a long wave aerial coil which I had inadvertently damaged, new tuning gauge, on-off volume control, loudspeaker and wavechange switch. The parcel from ITT soon arrived and the rebuild plus realignment soon done. The set worked well for another couple of years before the output stage failed again. At this stage I put the set into retirement and treated myself to a new stereo radio cassette.

A couple of years passed when on having a tidy up and sort out I came across my little friend again. Try as I might I could not bring myself to throw it out. I obtained a cct diagram of a more recent ITT Colt (1984/85 model) and apart from different transistors and biasing diodes the cct layout looked exactly the same.

So in went another order to ITT for these newer transistors; driver CS1914H, outputs MPS9460 and MPS9410, and DS20 biasing diodes. The service from ITT was again excellent with the parts arriving a few days later.

On a day off I set about the task of rebuilding it, after replacing the transistors and diodes and changed the value of dc feedback resister to that of the newer cct. Careful checks of the idle current and midpoint voltage proved ok. I.e. 25-30mA total idle current and 3V mid point voltage. As it sounded ok I set about the task of putting everything back together. Now, as you can imagine with the set being dismantled and re assembled so many times. to get the pcb secured and the back to fit snugly. it took a combination of candle wax and double sided tape. OK as long as you keep the radio out of direct sunshine or away from radiators. This last rebuild took place back in 1986 and still works well today; I get 4-6 weeks out of the batteries using the set 1-3 hours a day.

I do not think we will see many of these models despite their popularity during the 1970s, because there was obviously a design fault with the DC coupled output stage on these sets which took ITT a few years to sort out.

As well as learning an awful lot about low powered DC coupled transistorised output stages, I must surely own the most rebuilt transistor radio ever...

Would I do it all over again? You must be mad!!

ITT were not alone in having reliability issues with their early DC coupled transformerless output stages. My grandfather bought a new Philips transistor radio in the mid 1970s and this too failed within a couple of years due to output transistors, and was deamed not worth repairing. Some years later I obtained a similar Philips model in a poor state, and this too had dead transistors in the output stage.