I acquired the HMV 445 as a result of a long search to find the type of radio which my wife remembered from her grandmother's house. In the end, I found a picture of a likely radio for sale on e-Bay and she confirmed that it was the right one, so I had to buy it.

The radio is a five valve plus rectifier superhet for Medium and Long waves. The valve line-up is MX40, frequency changer, VMP4G IF amplifier, D41 detector and AGC, MH4 audio amplifier, MPT4 Output valve and U12 Rectifier. The radio had obviously been repaired in the past: Replacement cardboard electrolytic capacitors were simply hanging from the chassis wiring and several of the original Marconi valves had been replaced by Mullard equivalents. Obviously, a full rebuild would be needed. I won't cover everything, just the unusual things I found. 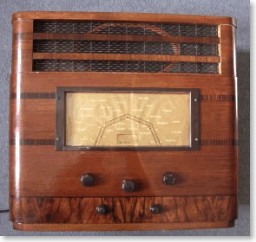 On this set, the dreaded tubular paper capacitors (nearly all 0.05 mfd) had two tags at one end. The other end was a push fit into a metal socket riveted to the underside of the chassis. The tags each had four holes, which were used for the majority of the wiring and to support most of the resistors. Simple replacement by modern axial capacitors was out of the question for me, as it would have destroyed the under chassis layout and appearance completely. Therefore, each capacitor was removed, the pitch at the ends melted with a soldering iron and the guts removed. The tags were cut off the old foils and soldered to the wire ends of the replacement caps, the assembly then being put back into the old card tube and the whole filled with pitch.

Three of the paper capacitors were originally 1 mfd for HT decoupling. These had been replaced by 0.5 mfd wire ended can types which were too small for the original sockets and had been held with bits of rubber for packing, distorting the sockets on the way. The replacements had become leaky, so I obtained modern capacitors designed for speaker crossover networks as these were near to the required size. I made then up to look like the originals by winding thick paper round the outsides till they were of the required diameter, fitting the HMV four-hole tags to the wires and filling the whole with pitch. Fortunately, the old tags had been left hanging on the wiring by the previous repairer, so I could re-use them.

Originally, these sets had the HT reservoir and smoothing electrolytic capacitors in a rectangular can above the chassis. Mine was totally missing, but I determined the measurements by scaling off from the diagrams in the 'Trader' service sheet. I found an old biscuit tin and made up a replica of the original, putting a couple of modern tubular, wire ended, electrolytics inside. I sprayed the can with '5-wheel steel' paint from Halfords and it looks pretty much the part.

All but one of the knobs were missing from the set. The wavechange knob remained and I used this as a master from which I made a mould for the volume and tuning knobs. The knobs were cast in hard Plastic Padding, drilled for the shafts and tapped for 4 BA screws. I studied pictures of HMV 445 and Marconiphone equivalents in books and on the internet to get an idea of what the little knobs were like for tone and inter-station noise supression. I made up brass shafts to fit the controls and then I just cast some lumps of Plastic Padding on the end of the shafts. The knobs were then shaped in a lathe. Finally, I mixed some Humbrol model paint to match the original and painted the replacement knobs. 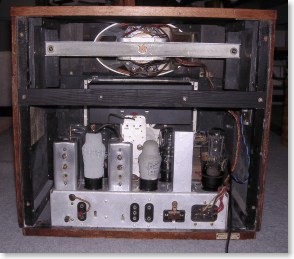 On switch-on, there was a violet fireworks display from the rectifier, which was obviously not the original anyway as the envelope was too large and rubbed on the tuning capacitor vanes. I found a suitable replacement from my junk box and solved that problem. The set received stations but sounded completely strangled and the HT voltage was higher than it should have been. This set uses the voltage drop across the speaker field winding to provide negative bias for the output valve. The bias is set by a potential divider consisting of a 500K and a 50K resistor, so roughly one tenth of the voltage drop is used for bias. Unaccountably, the 500K resistor had been replaced with one of only 20K, resulting in gross over biasing of the output valve, which was effectively completely cut off. After the correct value was put back, the audio quality was completely satisfactory and the HT voltage was spot on. Don't ask me how anybody could have lived with the set as it had been.

The volume control was found to be noisy. I like to keep things looking original and modern replacements are much smaller than the 1930s variety. I therefore dismantled the old pot and found that the track was covered in grease which, presumably, had come from the shaft. I removed the shaft circlip and pulled out the shaft and wiper so that I could degrease the track properly, using Halford's Brake Cleaner spray for the purpose. When all had been reassembled, the result was perfect.

Although there is an adjustable core for the oscillator coil, the padding capacitors are fixed and I could not initially get the MW stations at the long wave end of the dial both to line up and to peak in sensitivity. In the end, the problem was fixed by changing the alignment of the tuning pointer by a few degrees.

Initially, the set had more than the usual number of 'superhet whistles', indicating some instability. This was cured when I replaced an unmetallised frequency changer (MX40) with a metallised FC4 equivalent. Some day I will find a metallised MX40.

The set has been given a pretty full restoration, including a new waterslide logo transfer made following hints on the Discussion Forum. It looks good and now works very nicely. Ann is pleased!

The tuning indicator is an HMV 'Fluid Light' type, in which two bars of light grow towards one another as the station is tuned. The indicator bears the words 'Tune for max light'. I briefly worked for EMI (HMV) as a holiday job and one of the favourite sayings of the engineers, when checking out a new piece of equipment was 'Tune for maximum smoke'. I wonder if the two thoughts were linked.