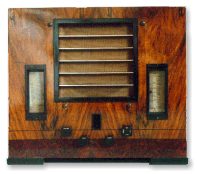 This is an amazingly Art Deco or Cubist radio. The cabinet is boldly rectangular with square feet, rectangular tuning scales, a square speaker aperture with chrome bars and - do you believe - square knobs!

The valves are 4-Volt heater British 5- and 7-pin types. The line up is MX40 frequency changer, VMS4B IF amplifier, MHD4 detector and audio amplifier, PX4 Output and U12 rectifier.

The set covers long and medium wave, has bandpass tuning at the front end and stagger tuned IF transformers to provide matched IF bandwidth.  Some low and high frequency AF boost is provided, and the set sounds bigger than it looks.  It is built like a battleship, with good electrical and mechanical design and good workmanship in the wiring and component assemblies.

The HMV 442 and 443 and the Marconiphone 296 are electrically similar receivers with minor cabinet differences. They were released in 1934, and are described in "Trader" data sheet number 521.  Even if you are highly experienced, it is essential to obtain the data sheet before attempting restoration.

The set described here was complete but very shabby, with water-damaged lacquer, de-laminated veneer and plywood on the cabinet, and quite a corroded chassis.  It was not for the faint hearted! 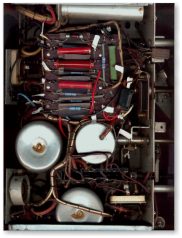 As can be seen in the under-chassis view, most of the resistors are mounted on a large tag panel.   This panel is mounted on a rectangular box containing all the waxed-paper capacitors in the set, the space around the capacitors being filled with pitch.  The capacitors are generally also connected to tags on the board and there is a couple of flying leads.   The wires to the tag-board are arranged in groups, laced together into a neat cable-form. Unfortunately, not all the tags are labelled, and many of the wires are not colour coded.  Therefore, it was essential to make a sketch of the tag board and give every unmarked tag a letter or number and to tie little identifying labels to each wire as it is removed. Removal of components was not easy either, as the tags have fork ends that had been squeezed tightly together to grip the component wires.

I had to replace all the paper capacitors in the box.  To do this, all the connections to the tag panel had to be separated. The screws holding the capacitor box to the chassis were removed (some are very inaccessible) and the whole box and tag panel were removed.  Small rivets holding the tag panel must be drilled out, giving access to the box.  The pitch and capacitors were then dug out.  I kept the pieces of pitch for back filling of the replacement capacitors, but decided against it in the end.  The capacitors were replaced with modern polyester types. I found it useful to use a 16-gauge earth rail running along the middle of the box and fix the majority of capacitors to that.  Insulating sleeves were fitted to all capacitor wires. The tag board was refitted to the box using small nuts and bolts, and the capacitor wires connected to the appropriate tags or to flying leads as necessary.

The main smoothing electrolytics both re-formed with no trouble.  Several of the resistors on the tag panel were found to have gone very high (plus 60% or more) and were replaced.  A careful check of wiring revealed a replacement wire in the cathode circuit of the detector and AF amplifier.  The wire had been connected to the wrong tag on the tag board.

On firing up the radio, signals were received but a very loud intermittent mains hum was evident. The AF amplifier cathode voltage was near zero.  A check on the valve showed it to have a heater-cathode short. Rather than scrap the valve straight away, I decided to try a last resort to see if I could "blow" the short. I connected both ends of the heater together and then connected a 12-volt car battery between heater and cathode. I was lucky. There was a brief fizz from the valve and the short had cleared.  On trying the radio again, the rough hum had disappeared and the radio started working normally.

The tuning drive on these sets is a real puzzle, with no guidance from the service sheet. The tuning drum is basically two black plastic drums, back to back.  The rear drum carries a cord to the shaft of the tuning knob. There is a metal insert with two tags inserted in the circumference of the drum. One end of the drive cord carries a small wire hook, which is fitted over one tag. The cord runs round the drum, three times round the tuning knob shaft and back to a tensioning spring, whose other end goes to the other tag.  It took some experimentation to get the cord wrapped the right way round the tuning shaft and drum.  The front drum carries a second cord, which drives the two tuning scales. Again, the cord has a small hook tied to one end and a tensioning spring at the other. The metal insert was missing and had to be made by bending and filing annealed shim steel. The cord starts from one tag, goes nearly once round the drum, across to the top of one tuning scale, down the scale, back round the drum, across to the other scale, along the scale, back around the drum and finished up with the tensioning spring anchored on the second tag.  It took several attempts before I had the tuning knob moving the scales in the natural sense, with the scales moving in opposite directions and with the whole lot turning the tuning condenser in the right direction.  Maybe some day I will make a drawing...

The set uses a "fluid light" tuning indicator.  This is a moving iron meter in the anode feed to the IF amplifier.  The armature "measures" the anode current by deflecting a very light aluminium shutter which produces a shadow in a beam of light aimed at the tuning indicator display.   By the time I had cleaned the chassis, my tuning indicator coil was open circuit due to a broken connection. I managed to remake the connection, otherwise there would have been a very difficult job rewinding the very fine wire. Beware also that the aluminium shutter is very fragile and best not touched.

One of the strangest engineering features of the radio is the mains switching, which uses a toggle switch operated by a cam connected to the wavechange switch.  There is another toggle switch operated by pulling out the volume control knob. That one reduces the sensitivity of the IF amplifier, to reduce noise when tuning between stations.  It seems that in the 1930s, interference from next door's fridge could be severe and, with AGC, the inter-station noise could be deafening.

This set was a typical example of what we are likely to find.   It had stopped working, someone had attempted a repair and failed, and it had been left in a damp shed for years.   It was necessary not only to cure the effects of damp and neglect, but also to find the mistake made by an earlier repairer.   The end result is a superb set, one of the best in my collection.

The under chassis picture was created by sitting the whole chassis on a flat bed scanner!  I recommend this, but be careful to support the chassis, so it does not scratch the scanner bed.