This "Recent Repair" was kindly contributed by Colin Carmichael.

This set was very tatty when I bought it. The finish on the wood had dried up and was badly scratched, and it was very dirty. The chassis was complete and had some rust on the top deck.

At first I was going to leave the restoration of this set until the summer, but I love the styling of it and it is an early superhet so I started right away!! 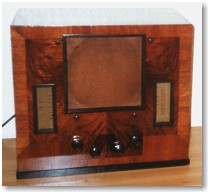 From a quick examination the only previous repair was the smoothing cap which had been wired into the mains energised speaker via the connection on the connecting panel. This cap was a very old paper cased type and since these are usually open circuit, I decided to remove it and replace the originals which are in a pitch sealed box under the chassis along with all the other electrolytic and wax-paper caps.

I noticed something very strange when I disconnected the old smoothing cap - it had a 6.5 volt dial bulb wired in series with it (in the positive wire!), I don't know who put it there or why but it is very strange!!!!!

All the caps in the pitch sealed box were leaky and had to be replaced. This box has most of the resistors mounted on top of it on a tag panel. All the wires from the caps inside the box are connected to tags on the panel and the resistors are connected to wires which surround the box. These are all tied together very neatly and it is a shame to burst them. Replacing all the old caps was not easy. First of all I made a drawing of all the tags and gave them all a number, then I used small sticky labels to tie around the wires. With all the wires removed the screws that hold the box to the chassis were removed and the whole thing was lifted out. I have done this awkward operation on a lot of early 30s Marconi/HMV sets and usually the tag panel is held on with rivets, however this one was held on with small screws and was removed easy. You have to drill out the rivets if these are used, obviously!!

There are 2 ways to remove the caps and the pitch, one way is messy and the other, if done over a bin to catch all the lumps of pitch that fall out, is not. The messy method involves heating the container to melt the pitch and the less messy method, which is the one I used, involves tapping the box with a rubber mallet to loosen every thing and pulling it all out. Once this was done the old caps were left dangling on wires,I always leave a small length of wire to solder the new caps to. This also helps to get the caps connected to the right tags,if you make a mistake when taking notes on the connections (it is still possible to put one in the wrong location which I did - read on!!).

Before I replaced the capacitors, I checked the value of all the resistors on the panel. Some had gone high and were replaced. I don't usually check resistor values unless a set is giving problems associated with high resistor values, but it is easy in this set since they are all on one panel. The caps were replaced and I made sure that they all went in the right places. All bare wires were insulated with sleeving, this is very important in this case as the box is tightly packed and if wires are left bare, there is a high chance of one shorting against the wall of the box.

After this the whole thing was reassembled. Now time for a test! The set worked on medium wave but nothing could be heard on long wave and strange whistles and spluttering sound were heard if the volume was turned up more than half way. All the valves were OK, so I checked the resistor values again in case I had missed something out. But everything was fine. I also checked to see if any of the screened cable was faulty but still nothing could be found. The only thing to check now was the connections of the new caps I had installed.

Perhaps I should listen to my own advice of checking each new connection!!! I had soldered the lead of a new 1mfd cap to the wrong tag -it was only 1 tag along from the one it should have been, but I have to admit that it was my fault!! With this cap connected to the correct tag the radio worked much better on medium wave, but long wave was dead. I have had problems with 30s Marconi/HMV on long wave in the past and it is often found that the long wave aerial coil is o/c. Sure enough,this was the problem with this set. The coil is covered with paper so I peeled this away and I was lucky,the fine wire had broken away from its connection at the top of the coil and I was able to solder this back on.

This brought the set back to life and it sounds good. It lacks AGC, so you must turn the volume down when tuning past a strong local station, other than that, this is a fine set and it works well.

The cabinets finish was in a terrible state and I had to give up and strip it with Nitromors. With all traces of the original finish removed, the cabinet was given about 6 coats of Danish Oil. This really brings out the wood grain and gives a very authentic shine. The only problem is that Danish Oil is a clear finish, so it may be necessary to stain the wood first.

After the final coat was applied,the cabinet looked great and best of all it also looks original. To finish the set off the speaker cloth which was in good condition was cleaned with cold soapy water and with the gentle aid of a scrubbing brush. The knobs and trim were removed and cleaned and polished in the usual way and the finished set looks good and works good and its one of my (many) favourites!!!

With reference to Colin's mention of the 6.5V light bulb in the HT circuit, I have also seen this occasionally. The light bulb is used as a fuse. It will generally not glow visibly. However it will handle the surge as the capacitor charges (particularly if the set is switched off then back on before the valves cool down) and it will blow readily if overdriven.

Regard the pilot lamp in series with the HT lead in the HMV 438, very effective fuse often found in early American military equipment, cost effective.