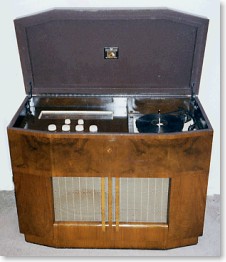 In the late 1940s and 1950s, a large radiogram was something of a status symbol and quite costly. Many incorporated more advanced circuitry than their table-model brothers and sisters and if you have the space, they can be a worthwhile addition to a collection.

Originally, the unit would have had an HMV autochanger, but this had been swapped for a Garrard RC120 early in its life. The set also includes a Smiths Sectric electric clock with time switch so that the radio can be preset to turn on for favourite programmes. I was amazed and delighted to find the clock worked perfectly.

I bought the radiogram because it was clearly a top of the range item in its time, with what promised to be a sensitive and powerful radio, and with an autochanger which would enable me to play records from my collection of 78s.

The first item I looked at was the autochanger. I found that the bearing of the main camshaft for the mechanism was seized solid. This was dismantled and lubricated and the changer then worked perfectly.

The radio was much more interesting to repair. One paper decoupling capacitor in the HT line was a dead short, all the wax having melted out of the tube. Also, a beefy wirewound HT smoothing resistor was open circuit. It's always nice to find why any radio has failed because you are then well on the way to getting it working.

I then removed the waxed paper audio coupling capacitors from the audio and output stages and found they were badly leaky, as I had expected they would be. I therefore replaced all the waxed paper capacitors with modern polyester types. This involved some serious dismantling because one was hidden inside the coil pack. The coil pack is on a sub-chassis which had to be completely removed to gain access. This involved disconnecting about five connections on a tag strip and disconnecting aerial, earth and tuning capacitor connections. Half a dozen self tapping screws were removed to free the subchassis. After repair, various leads have to be pulled through grommets in the main chassis as the coil pack is reinstalled. This is aided by temporarily attaching string extensions to the leads. 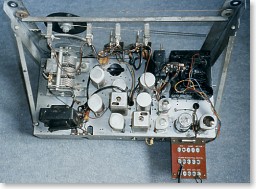 I then re-formed the main smoothing electrolytics, all of which responded, despite being dated August 1950. It was time to fire up the radio. I was treated to the sound of stations, but with very heavy mains hum and awful audio distortion. I checked voltages on the audio valves and found the KT66 to be taking a high current and to be showing a positive control grid voltage. This means the valve is taking grid current, which it should not do and usually means the valve is at the end of its life. A spare KT66 from my collection fixed the grid current and the distortion, but I was left with the hum.

The HT smoothing components included a 16 mfd electrolytic capacitor, a smoothing choke, two 32 mfd electrolytic capacitors and a 1K , high wattage, resistor (the one that had blown). Somehow, in the past, somebody had incorrectly rewired the circuit so that the resistor, rather than the choke was smoothing the HT to the KT66, all 65 mA of it. This had eventually led to failure of the resistor. When the circuit was rewired correctly, the mains hum disappeared and the set performed very nicely.

There is a moral to this. In many cases, the radios that we find for restoration have been subjected to failed attempts to repair them in the past. It is not then sufficient to replace failed components. It is also necessary to check that the circuit is as it should be.

Finally, I was ready to try some records on the autochanger. The sound from a mono record of the Beatles was surprisingly good. This proved that the Garrard GC2 turnover cartridge was working. This was a bit of luck, as the crystals are liable to fall to pieces with age. The 78 performance was not bad, with the available treble tone control providing good scratch filtering. I was then lucky to find a new 78 stylus in a local junk shop and the 78 performance became excellent. I have now had a 3.5 thou radius diamond fitted for playing my 1930s dance band records and the results are great. One day I hope to find an original HMV changer.

Although the radiogram has only a single 13" elliptical speaker, it has a powerful magnet and an aluminium centre, giving extended treble and I am very pleased with the audio quality and available power from the radiogram. The radio side is as sensitive and selective as I had hoped.

Later radiograms became "Hi-Fi" with push-pull output, infinitely variable tone controls, FM radio and stereo, but the HMV 1611 represents the last of the pre-Hi-Fi mono era and I love it. I have bought a set of valves for it as an insurance for the future.