Around 1929, several manufacturers produced four valve "suitcase" battery TRF portables, of which this Halcyon is one example. It uses a screen grid RF stage, and triode detector, AF amplifier and output stages with 2 Volt heaters. HT is 99 volts, with a 56 volt tapping for the screen grid. The aerial is a large frame aerial mounted in the lid. The lid also contains a 12" cone moving iron loudspeaker. Controls are separate tuning condensers for the Aerial and detector circuits, a variable condenser for "reaction" control on the detector and a wavechange switch marked "Long Waves", "Short Waves" and "Off". In 1929, what we call Medium Wave was called Short wave. 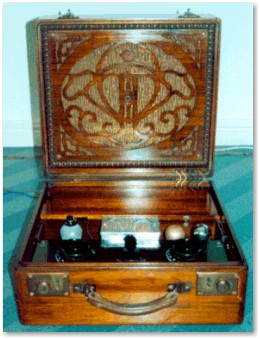 As found, the radio had only three valves, only one with markings. The screen grid valve envelope was not only loose on its base, but the leads were all broken. I started from Paul's Valve Data CD-ROM and found likely type numbers for each stage. I then went hunting to Philip Knighton's shop in Wellington and rummaged through his collection of used valves to find similar types to those I had chosen. Philip rightly advised that the set would be very tolerant of substitute valves and I came away with a 215SG RF stage, a PM1A detector, PM2HL Audio stage and 220P Output. Although I had no circuit diagram, I found the circuit to be very simple, with few components.

The battery leads were marked with tags indicating the required voltages, so I made up a grid bias battery from AA cells, an HT battery from 9 Volt dry batteries and bought a 2 volt sealed lead-acid rechargeable for the heaters. A quick check of HT insulation showed the one and only HT decoupling condenser to be leaky. It was a can type waxed paper job, so open the can, dig out the innards and replace with modern polyester component and seal up again. Connecting up the batteries and switching on yielded precisely nothing.

I checked presence of heater voltage at each valveholder and confirmed heater current for each valve. However, no HT was reaching the anodes of the audio and output stages. To my horror, the intervalve audio coupling transformer was open circuit, as was the loudspeaker winding. The intervalve transformer was a beautiful looking ebonite cased job by Igranic. I carefully drilled out the rivets holding the base to the casing and extracted the transformer core and coils. It was a 3:1 step up transformer wound with wire of 40 gauge or finer. I decided that rewinding was beyond me and looked for a replacement. No Joy.

OK, so I decided to retain the transformer casing, leave out the core and windings and substitute an anode load resistor for the audio stage, a coupling capacitor and a grid leak resistor for the output stage. I chose a 220K anode load, 0.5 Meg Ohm grid leak and 0.1 microfarad coupling capacitor, which work fine. With the speaker, I was lucky. The high impedance coil was again in 40 gauge or smaller, but I found that there was a break in the winding near the outside and I was able to reconnect to the existing winding.

The mahogany battery box had suffered from acid spillage from the original LT accumulator. Wood had to be cut away and new pieces grafted into place and French polished to match the original. The battery compartment cover (at the back of the radio) was missing. I made a new one from wood salvaged from an old front door, cut and planed to size and stained and polished to match the box. The detector is in the central screened box. This was polished and a new retaining screw made up to match the surviving one. The engraving on tuning dials, wavechange and reaction controls had lost its filler. A white engravers filler stick was rubbed over all engraving and the surplus polished off with a duster. The result was very satisfying.

The radio now works very well, is sensitive and remarkably loud bearing in mind that it has a total HT current drain of less that 10 mA. The detector and audio valves can be swapped over without any significant effect, proving the tolerance of this type of circuit. The reaction control has to be set just below the point of self oscillation to provide selectivity and, even then, long wave is dominated by splatter from Droitwich. However, turning the frame aerial to reject strong interfering stations helps a lot. The loudspeaker sounds much better than the horn speakers which had been used in the late 1920s but the stiff armature means that there is very little bass audible.