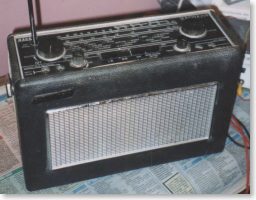 This is a rather large high quality very well built portable radio dating back to the late 60's. It runs on two PP9 batteries in series giving a supply voltage of 18V.

It has two separate tuner boards one for AM and one for FM. The AM board comprises of the usual AF117 transistor line up whilst for FM there are seven silicon transistors of the BF194/195 family. The DC coupled audio output stage employs seven transistors (2x BC108's, 2xAC128's, 1x OC71 & 1x AC176). The 1.5 watts of audio drive a large 15-ohm Goodman’s loudspeaker, which is fitted in the large leather cloth covered wooden case. It does sound very good.

I came across this particular set many years ago back in my school days. Most of the time it lived in my friends Kitchen and occasionally it would be bought with us on camping holidays. Last year whilst on holiday these friends asked if I could take the set home to find away of converting it to mains only as PP9 batteries are rather expensive.

I managed to get the manual from Paul's web site. The first thing I did was check the battery consumption, which was 20mA on AM and 21mA on FM, so no problems here then. The set ran well on FM but no results on AM. I took the set apart, which was very easy and explained well in the manual. I soon traced the AM fault to short circuit (collector emitter and screen) AF117's in position TR1 and TR2. TR1 on this set is a Hartley oscillator, whilst TR2 is the mixer and first IF. The telescopic rod was also broken; a replacement was obtained from Maplins and was soon fitted. 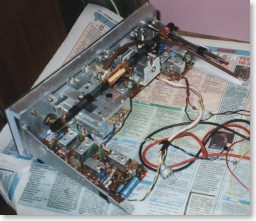 Using my bench supply the set gave good results on VHF so now it’s time to concentrate on the AM side of things. I managed to source some AF117’s from a friendly chap in Runcorn. It was a good job that I bought a few because three AF117’s were leaky, TR1 TR2 and TR3 and not just between the collector and screen. Dropping the chassis out is fairly straightforward together with removing the screening can of the IF board. Replacing the two transistors TR2 and TR3 on the main IF board was not too bad, but TR1 mounted on the small switch PCB was a bit of a fiddle. I recommend to anyone working on these sets to use a good solder sucker as the transistors were mounted on lugs that go through the PCB.

Having replaced all 3 faulty transistors, the AM section burst into life and worked well for 30 minutes or so before loud cracking noises exploded from the speaker. Further investigation revealed that the fault was on the AM side of things and proved highly intermittent. After lots of soul searching and gently tapping around with handle of a screwdriver I found a few dry joints, some hairline cracks and tried cleaning the switch bank all to no avail. It could have been one of the replacement AF117’s but I did not want to go down that road. I checked voltages, I froze and heated up things but purely by accident I found the fault. By providing an alternative earth from the IF board to chassis cleared the fault. This I proved a number of times successfully when the fault was present. Thinking the problem was due to corrosion on the tread of the chassis screws I decided to solder in a length of wire between the earth board and chassis, which seemed to clear the fault. Well it did for an hour before returning with vengeance. At this point it was time for a coffee and smoke break followed by a few hours down at the local!

A few days later I returned to the job and decided to replace 2 of the small mounting screws and refit the screening can. Bingo - it ran for hours without a single crackle on both AM bands. Using my trusty old signal generator I found the alignment only slightly out so with a little tweak on the IF’s and front end everything was soon lined up. A small tweak on the FM front end was also required to bring the calibration spot on.

It was at this stage that I managed to obtain a plug in 18V DC PSU from Wireless Works in Cornwall. So the next job was too drill a small hole in the back panel to fit the power supply jack. Thinking that I was only going through covered chipboard I used a small scewer. A few hours later I soon realized my mistake. This radio is built out of solid wood so it took quite an effort and some gentle filing to get the right sized hole. I also removed the hinged bracket at this point, as it was quite rusty due to a combination of battery leakage and damp. So I fitted 3.5mm power type jack socket and wired it up to the old battery leads (using centre pin as negative) cleaned up the hinged bracket as best I could using Brasso and a rust killer fluid and refitted, things were starting to take shape at last.

A test through the power socket from my bench supply proved OK, so time to try that new 18v plug in power supply. Oh Dear!! Everything was fine on VHF but not on the AM bands. Both AM bands were affected by a very unpleasant buzzing noise, which was worse on the lower frequencies making reception of BBC R4 on 198KHz almost impossible. I tried different capacitors strung across the supply but to no avail, I also tried some ferrite rings but again it made little difference. I found that if I carefully routed the power cable going to the on off switch away from the ferrite rod aerials I could reduce the noise, but not enough.

A further test, using another portable radio, with the power supply plugged in and with the Hacker switched on the noise was located to the power supply itself. As I could not get into the plug in power supply I was stuck. Amongst a graveyard of old computers I found a printer power supply which although faulty had a very useful looking in line filter choke. With this now fitted plus some careful routing of the supply lead from the power jack to the on/off switch I reduced the noise to acceptable levels even on Long wave. I knew the set would be mostly used on VHF for either Radio 2 or BBC Radio Cornwall, which they should get on 95.2Mhz from Caradon Hill, but I still decided to check with the owners and indeed that is what they confirmed. So at last we are on the home run.

The cabinet responded well to a clean with a damp cloth and mild soapy water, and the stubborn patches of dirt on the leather casing to a light application of WD40 and some elbow grease. Foam cleaner took care of the glass and the knobs. I ran the set for a week or so both at home and on holiday before I took the set back. On holiday, which was about 12 miles from where the owners lived, it worked really well pulling in all nearly all the stations on the FM band including Classic FM but of course no Pirate FM or Radio Cornwall from Redruth (which is on 103.9MHz) but this was no problem as the Caradon Hill Signal on 95.2MHz was belting in at our holiday home and with the owners living on high ground there should be no problem.

Well after enjoying listening to this wonderful radio in our holiday home and never hearing Radios 2, 4 and Cornwall on FM so clearly it was time to take the set back to it’s home. On arrival I quickly plugged the Hacker in and my heart sank! The Redruth television mast was clearly visible across a few miles of fields so FM reception on Radios 1 (does anyone ever listen to this station anymore?) 2, 3, & 4 plus Classic FM was wonderful but no Radio Cornwall on 95.2Mhz. A quick look outside showed that although we were high up, there was a hill in exactly the wrong position blocking all signals from Caradon Hill. (Talk about Murphy’s Law!). With some trepidation I switched over to the medium wave band and tuned in to the local Radio Cornwall signal on 630KHz from the 2KW transmitter near Redruth. It was ok and the owners were happy but my trained ear could pick up that background buzz. Anywhere else in the country it would have been OK, but as this part of West Cornwall is solid granite the ground wave losses on are very high so this 2kw station although only 6 miles away actually sounds more like 20 miles away. As they were happy I left the set with them but I have plans to design and build my own linear power supply if the need arises.

It has been a great privilege to restore a set that I knew from my childhood. So impressed was I with this set that I have bought one for myself, off eBay. But guess what it only works on FM only! I also have no plans to run this set off the mains but will run it from two PP9 batteries just as the Hacker brothers designed it to.