Using the service information from "Radio and TV servicing" 1958-59, the machine was identified as a very late MK1, in fact it was only 102 machines short of being a MK2.

There are slight differences between the two marks in switching, my machine looked very similar to the MK2 diagram. The owner had kindly "de-gaussed" the heads and tape transport before sending me the machine.

After a quick mains test and fitting of mains plug the machine was powered up. Since the machine had been recently plugged in, I considered it a waste of time trying to reform the HT capacitors and after a quick safety check (including the voltage selector setting) powered it up straight away via the safety lamp.

A short test with the pre-recorded tape of the Beach Boys Greatest Hits found on the machine, (an occupational hazard - it could be worse, I once repaired an eight track, and the only tape available was the soundtrack to "Paint your wagon". The memory of Lee Marvin singing "I was born under a wandering <CLICK> star" as the player changed tracks still makes me titter, but that's another story!) confirmed the owners report of weak and distorted output, and I was only able to obtain a normal listening level with the volume control set at maximum.

The audio bandwidth seemed to be limited too, rather like listening to tapes down the telephone. The situation wasn't much better on monitor either, the machine also producing weak and distorted signal on both "through" and recordings. There was also some intermittent crackle which seemed to be associated with the volume control.

In common with many German electronic products of this era, Grundig have once again managed to cram a lot into a small space. Dismantling is fairly straightforward though, and other than barely adequate length speaker leads, posed no real problems. 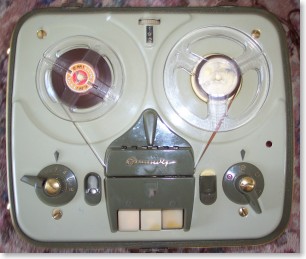 First the plastic covers covering the tape path are removed, along with the rewind knob. Then the other knobs are removed, followed by the main panel. The substantial cast chassis is retained by four nuts that my BA box spanner didn't fit! Doh! It's German and of course uses metric threads.

They weren't too tight however and easily loosened by a pair of long nosed pliers.

I had to turn the chassis over, so the inverted chassis was placed carefully on some large chunks of foam to minimise the risk of damage to the tape hubs and heads etc. It could equally well have been placed onto an old cushion or similar.

All the small signal valves and most of the circuitry is well protected from mains and stray fields from motors etc. by thorough screening. An "L" shaped tin cover retained by 3 small screws (be careful not to let them drop into the works!!!) which must first be removed to allow access to the circuitry and valve base connections.

With the controls set as described in the service information power was applied to the machine, and once it was sufficiently warmed up, out came the AVO 8 for a few voltage measurements.

All voltages around the EL42 output valve tallied with published values, and a healthy buzz was heard when the multi-meter lead was touched onto the output valve's control grid, so this stage was probably OK. So far so good! Any doubts and the audio signal generator would have been dusted off.

However the anode voltage measured at the second section of the ECC81 was significantly lower (50 volts measured) than the value given in the service data. (125 volts quoted). The cathode voltage was also measured and found to be nearly twice the given value.

A replacement N.O.S ECC81 gave identical symptoms. While the old valve was out, the anode resistor was checked and found to be within tolerance. What would cause the valve to pass too much current, as indicated by the cathode reading, causing a larger than expected voltage drop across the anode resistor? 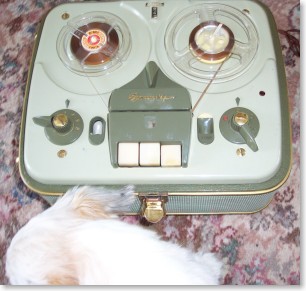 Check grid! There were a few volts +ve here, the 0.022 uF coupling capacitor, C16 obviously badly leaky. Just to confirm this I shorted the anode of the preceding section of V2 to chassis via a 1K ohm resistor and watched as the ECC81 anode rose to almost the published value. There little risk of damaging anything, because the anode of the previous stage is fed via a 100 k ohm resistor. The poor cathode resistor seems to have been unaffected by the ordeal, both looking and measuring OK. I left the replacement valve in position as I have heaps of them and the original may well have been strained, or at least had its life shortened by the fault conditions. A replacement capacitor worked wonders, the output now a reasonable volume. There was even some treble!

Nearly all the brown toffee like capacitors were found leaky, notably C11 which was allowing DC onto the volume control, probably causing the aforementioned crackling. I decided to replace all these horrid capacitors (neatly described by someone on the forum as "Teutonic Hunts" - and they really are that bad!), with the usual yellow RS 400v axial types, except in areas such as the bias stages where 1000v rated capacitors were used. Several small value electrolytics were also replaced, including the 10uF across the cathode resistor of the offending section of V2.

On subsequent test all crackling had vanished and the bass response was better too. The magic eye actually responded to input signal, and was easily visible in normal light.

Using the pre-recorded tape as a reference peak azimuth was obtained by listening for maximum treble output as the adjustment was made.

I do actually have a test tape which includes a 7500 Hz tone for azimuth alignment, but it is for use at 7.5 i.p.s, twice the speed of this little machine. Running it at half speed would have given me around 3750 Hz, which wouldn't have been a high enough frequency to be affected very much by the azimuth, so would have been unsuitable for adjustments..

Valve electrode voltages, record bias current and voltage were found to tally with the service information when checked.

A few minutes of test recordings were made on a spare reel of tape, and I was very pleased with the result. With the "petals" of the magic eye image just overlapping a well modulated, good quality recording was produced.

The heads, pinch wheel, capstan and the area around the tape transport were all thoroughly cleaned with cotton buds and Isopropyl Alcohol. Switches and controls received a good dose of switch cleaner. The cleaning also extended to the "piano" keys and other plastic parts including the tape hubs. None of the belts were slipping, and were in good condition with no cracks or shiny areas.

Originally there were two foam pads inside the lid which held in place any reels of tape left on the machine while it was closed up and transported. These had of course perished long ago, and I thought it only right to try to come up with an alternative. After a think, I considered a couple of cable duct seals, about 1 ½ " in diameter, made from a hard black foam (similar to pipe insulation) would be suitable. After being washed and dried they were glued into place with contact adhesive. Although not the correct colour of course, the black pads did the job and didn't look too bad.