This set walked through my door in the hands of a friend who is often involved in clearing bits and pieces from the homes of old people who have deceased. In this case, the owner was alive and well. Someone had asked her if she had any Bakelite radios and said she had one in the loft. It turned out that this one is plywood, so the guy was not interested. The radio had only one owner and was bought new in Germany in about 1951 and imported to the UK. It still had its original tailor-made cotton dust cover! 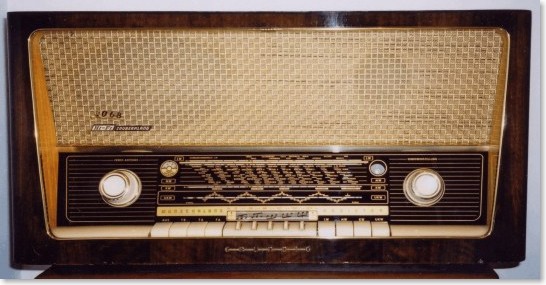 It was clearly intended for the German market as all markings for controls, scales and the cabinet back are in German. It proudly declares itself as HI-FI Zauberklang and covers Long, Medium and Short Waves plus VHF. The radio is similar to the later 'Hastings' model in having four speakers including an electrostatic tweeter and a ferrite rod aerial with a rotator to allow tuning for maximum signal or for rejecting directional interference. It differs in having a five-band graphic equaliser controlled by five edge-type potentiometers in the centre of the row of push buttons. Rear sockets, some unique to Grundig, provide for working with a separate Hi-Fi amplifier (Hi-Fi Strahler), a tape recorder (tonbandgerat), a gramophone pickup (tonabnehmer), remote control unit (fern-dirigent), external loudspeaker, and VHF or AM aerials. The set has an internal FM dipole aerial for local reception.

I do not usually get very interested in radios of the miniature valve era. However, I do like listening to Classic FM in my office/workshop and of course, none of my older valve radios will do that. Because of the prospect of FM, and the obvious up-market quality of the set, I decided to restore the radio and see how it went.

First examination showed limited signs of previous repair, an excellent original cabinet and nothing broken. According to the cabinet back, the valve line up is ECC85, VHF mixer/oscillator, ECH81 AM mixer/oscillator, EBF89 IF amplifier/AM detector, EAA81 FM detector, ECC81 audio amplifier, EL84 Audio Output, EM34 tuning Indicator and a metal rectifier. The valves were of German origin. However, the ECC81 was labelled as CV455 and the EAA81 as CV283. Interesting - were the Germans using old WWII stock in 1951? 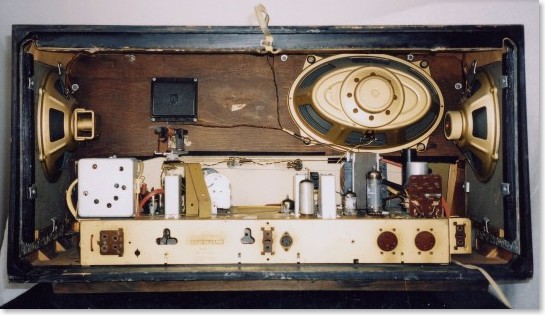 I have not found a service sheet for this beast, so had to proceed following the usual basic routine. Although the presumed paper capacitors appeared to be of high quality, all turned out to be leaky and were replaced. Many of the components are accessible by removing the panel in the cabinet base, but this is not so for the graphic equaliser capacitors, so the whole chassis had to come out. I needed to do this anyway to allow me to clean the dial and get all the dust out of the cabinet. It generally pays to clean the glass of the tuning indicator and its hole on the dial, because we need to make the most of the glow from the target, particularly if it is an EM34 - getting rare and expensive. 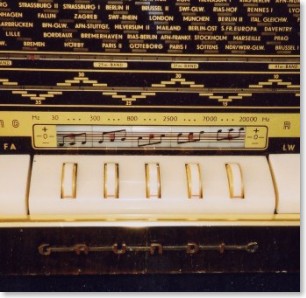 The white control knobs were dirty, particularly in the grooves on the circumference. Vigorous cleaning with a toothbrush working along the grooves with dilute washing up liquid did the trick The rotator mechanism for the ferrite rod aerial was very stiff, but responded to a good clean and a spot of light oil. The tuning drive has separate drive mechanisms and pointers for AM and FM, with a clutch operated by the waveband selector so that the tuning knob only operates the appropriate tuning capacitor for the AM or the FM bands. The shaft for the flywheel in the tuning drive was dry and responded well to a drop of oil. One of the pointers rubbed on the back of the glass dial and needed to be flipped over one of the tuning cords to get it right.

I re-formed the HT smoothing capacitors using my standard practice of robbing some HT from another radio and connecting it to the subject set via a milliammeter (Avo Model 8) and a 10K resistor. When the current fell to below 1mA, I knew all was well. I was surprised to find no smoothing choke on a set of this quality. However the service sheet for the related Grundig 2043/W/3D, which has similarities to the 3068 showed on closer inspection that part of the output transformer primary is used as a choke, probably also providing some hum bucking. Also, because of the way the current is arranged to flow, some of the magnetisation of the core due to the DC component of the output valve anode current is neutralised. This can significantly improve the behaviour of the output transformer.

The built-in FM aerial is made from metallised card strip glued across the top of the cabinet, and down the sides with extensions along the bottom of the sides. This provides an end loaded tuned dipole. However, the cabinet back is secured by clamps, which go across the piece of wood to which the aerial is glued. Careless installation of one clip had ripped the aerial strip. It had been repaired with staples, but the join was open circuit. I glued back the strip and painted it with conductive paint, which has been successful.

The electrostatic tweeter was initially dead. Thanks to contributors to the Vintage Radio discussion forum, I got a clue as to how to repair it and was successful. Basically, the tweeter has a conductive film on one side of a sheet of Mylar (?). The other side is covered with a perforated metal plate that is connected to HT. High audio frequencies go to the metallisation via a 1000 pf capacitor from the output transformer primary. The connection to the metallisation, which is a copper strip held against the back surface by a soft fibre pad, had failed. I touched up the metallisation with conductive paint in the area of the copper electrode and replaced a rubber foam pad behind the fibre pad to provide firm contact. The tweeter now works, though it sounds very quiet and only adds extreme top.

That was about it. The radio has exceptional performance on all wavebands and sounds beautiful. Even on the internal FM aerial, the set pulls in local stations well. Of course, being mono, it does not need a very strong signal to achieve quiet reception. I have decided that I shall certainly hold on to the set.

Brian Millson has now confirmed that the date should be 1956/57.