This German made "Piano key" set was left for repair along with a Bush VHF94 by one of my regular customers. I must be doing something right!

Overall condition was good, with a recently fitted replacement mains flex, and virtually pristine innards. Although it has the appearance of a 3D set (there are certainly three speaker grills) in reality there is only a single speaker, and the sound is "funnelled" to the side grills via two Bakelite scoops. 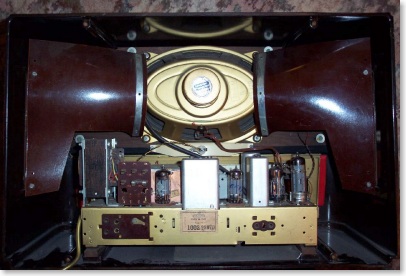 While I was at it, the EL41 was removed and a check for voltage made from the control grid connection of the valve socket to chassis. I found about +ve 1.5 volts, so replacement of "that" capacitor was the first task once the chassis was removed. 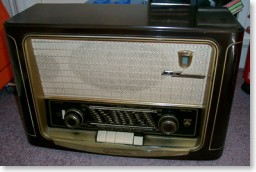 The switch was indeed intermittent and caused a great deal of crackling, and initially I thought the fault had been cured by a generous application of switch cleaner. However after a week or so testing at work the problem became evident again. The fault could be re-produced by pressing the VHF key slightly further than it's normal working position, leading to the conclusion the switch was almost certainly at fault. To confirm this each pair of contacts on the VHF switch were shorted using a pair of long nosed pliers. Only one pair cured the crackling completely when shorted, so at least I had a good clue. I did of course check that the contacts had no HT or such! Since they appeared to switch signals only I wondered if it would be possible to permanently link out the contacts. The suspect switch connections were shorted with a crocodile clip, and although this cured the problem on VHF I discovered MW and LW had all but disappeared. Oh well, now for plan B!!

Since I didn't have a diagram my only alternative was to remove the switch bank and inspect the contacts. Of course this wasn't as easy as it sounds, but surprisingly painless for a Grundig. Most of the wires were connected to the top of the switch, except a couple to the VHF head. These were quite stiff, which at least meant that when removed they would not fall back through the hole into the VHF tuner head. Careful note was made of the connections, and the wires labelled to minimise errors when re-connecting. A couple of the wires would have been awkward to remove, so these were cut at a suitable place so they could be soldered and sleeved later.

Once the switch bank was out on the bench, the VHF wafer was removed. Some black deposits were found on the wafer links, but these were soon removed by cautious scraping with the blade of a small jeweller's screwdriver and finishing off with an Alcohol soaked cotton bud. The contacts inside the switch looked, for the want of a better word, tired. Using a meter probe, the contacts could be carefully bent towards each other. There seemed to be an awful lot of solder at the base of one pair of contacts. Whether this had dripped through from the wiring tags, or was as a result of a repair, I was uncertain. Still, I did the best I could and re-fitted the assembled switch.

An option here if there is any more trouble could have been to use a micro switch activated by the protruding end of the wafer from the switch as an appropriate waveband was selected or possibly a relay switched from another good pair on the VHF wafer. Alternatively there appeared to be an unused pair of contacts on the ON/OFF wafer which could have been removed and re-fitted into the VHF wafer.

My fix seemed to have worked though (do you think I would write a report on a radio I couldn't fix?!?!) which was fortunate, as this was definitely a case in which the entire switch assembly would have to be refitted before a test was possible.

While the chassis was out on the bench I replaced the low voltage electrolytics in the audio amp and FM discriminator. There was some wear to the centre of the tuning scale, mostly station names, but wavelength markings were still intact.

As previously mentioned this was a German built set, and therefore designed to operate from 220 volts. I informed the customer of this, as heater voltages were little high at 6.8 volts, but he was happy to run the set in an unmodified condition.