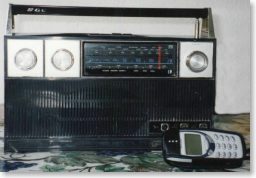 As can be seen from the picture along side a normal mobile phone, this is no pocket portable. I inherited this rather large portable radio from the family nearly 20 years ago.

Unfortunately I have mislaid the circuit diagram for this set since the last repair. I put it away somewhere safe and have not been able to locate it since. (I have now sent Simon another copy - Paul).

It uses germanium transistors throughout with the usual AF117 series line up in the IF, and some early VHF capable germanium transistors in the VHF/FM front end module. The main PCB is double sided print as used in all of GEC's televisions made in the 1960s and 1970s. The set dates back to 1965 as the tuning dial shows the Light, Third, Home regions and Caroline. This set covers Long and Medium wavebands, VHF/FM plus Bandspread which stretches the high frequency end of Medium Wave where Radio Luxembourg on 208m and Radio Caroline on 199m use to reside. The radio runs off one PP9 or PP7 battery, when in daily use a PP9 would last a month blaring out Radio 1 across the office.

Due to the size of the case and loudspeaker this radio does sound rather good with a pleasant tone. Reception is reasonable on all wavebands even on some of the weaker stations. One summer I actually heard Spanish FM stations during a Sporadic E event. I still use this radio a lot at home and up to a few years ago was used daily in my office at work.

Access for service is good. Remove three knobs on front of set and remove 4 x 4BA screws and the whole chassis can be eased out of the cabinet.

This set has been a reliable runner, over the years the on-off tone control was replaced due to an open cct pole on the switch, a replacement volume control fitted as the track had worn, and noisy wavechange switch responded to some contact cleaner and lubricant spray. 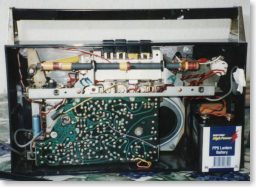 Whilst the set was at work a fault occurred, but the set was in no way to blame. The radio lived on top of a metal filling cabinet. A work colleague was messing about with a Megger (insulation tester), and for some obscure reason he decided to run an insulation check between the metal filling cabinet and some nearby central heating pipes. As soon as he switched the Megger on, the sounds of Radio 1 were replaced by a loud screeching sound (no, not Whitney Houston!) then silence. The only damage was a well and truly blown mixer oscillator transistor. I did not have an AF117 transistor to hand but an AF116 was a suitable replacement.

A few niggling faults have still to be cleared. On AM, very strong signals such as those from both our local radio stations (BBC Radio Bristol, & Classic Gold) can sound slightly distorted. I think this is probably a capacitor problem in the IF/AGC areas. On FM there is a lack of treble response making stations sound a little mellow. In fact on this set there is more treble on AM stations. I think this points to a problem around the FM discriminator.

Recently the set started to rattle, making listening even at low volume level unpleasant. Closer investigation showed that the tuning dial was about fall into the set. This meant a complete dismantling job to re glue the tuning dial.

The plastic cabinet is clean but a little bit battered around the corners and has some specs of white paint. On the bottom of the front of the cabinet there is a silver trim strip which had GEC and the number of transistors used. This unfortunately came adrift and broke in half some years ago and, I'm afraid, is lost for good.

All in all, a rather pleasant set which I still use on a regular basis.