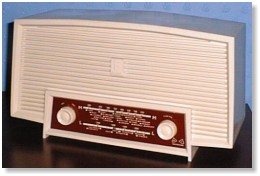 This set was offered at the NVCF in Birmingham a couple of years ago for £10.  By the end of the day it had not sold so I offered £5 for it, which was accepted.  The reason a set of this type sold so cheaply is evident in the photo – the cabinet is badly cracked on one side.  There are also stress cracks on the top, probably caused by heat.

Unfortunately the set recently sustained more damage in the same area as the original cracks, when the shelf it was on broke.  Since these new cracks were still clean, I decided this was a good time to repair it as best I can.

Many collectors would write off a set in this condition.  No dealer would consider repairing it because the cost of repairs would exceed the price the set would fetch when done.  As far as I am concerned however, the repair and restoration is a labour of love – financial considerations do not come into the equation. Although the set will never be in as-new condition, and the repairs will probably be visible, I think the set is too attractive and distinctive to scrap.  And anyway, one of these sets in excellent condition would cost more than I am prepared to pay.

The set receives MW and LW, and was probably made in the mid-1950s.  It uses the 8-pin U40 series valves (UCH42, UF41, UBC41, UL41 and UY41).  I had previously removed the UL41 for possible use in another set, but found it was faulty when tested.  This was no surprise – no one would intentionally sell a set with a good UL41 for a fiver!

Due to the nature of the damage I decided to deal with the cabinet first – so if this were not successful I would not have wasted any time and effort on the chassis.

As I was placing the chassis on the bench, a screw and washer dropped out.  These had previously been securing the tuning capacitor, and I was surprised to find that the other two screws were also loose.  The only reason these hadn't fallen out was because some components were in the way.  I refitted the screws before putting the chassis to one side.

I did notice that the chassis appears to be plated, and is still in very good condition.  There were some sad looking wax-paper capacitors that would need changing, but I couldn't see anything else amiss.

The tuning scale is supposed to be glued into the cabinet, but mine was loose.  With this removed it was time to clean and attempt to repair the cabinet.  I noticed some wax dribbles on the base of the cabinet, confirming the unhealthy state of the wax-paper capacitors.

Before attempting a repair, I cleaned the cabinet carefully with foam cleaner.  To remove the wax I found that WD40 was the most effective.

Upon closer inspection, I found that the cabinet is made from a slightly translucent material.  When the cracks are closed it appears as a dark line, even when the mating surfaces are clean.  I assume this is due to the light being able to pass part way into the material and the cracked or broken edges casting a shadow.  It was therefore clear that whatever repair I attempted would be visible – which wasn't really a surprise!

I positioned the broken sections together dry, and secured them with masking tape.  I also stretched a couple of bands of insulating tape around the cabinet – this is fairly stretchy and gives enough tension to hold the broken sections tightly together.  On the inside of the cabinet, I applied superglue along the length of the joints.  This is easier and more controllable using the version that comes with a small applicator brush.  The glue can be seen to draw into the joints, so further glue was applied.  This was repeated three or four times until the joints were full.  The cabinet was then left to dry for an hour before the tape was removed.  It was then left until the following day to allow the glue to dry fully.

Although the superglue bonds should be fairly strong, I decided to apply further strengthening to the inside.  The areas around the bonds on the inside of the cabinet were carefully roughened slightly with fine wet-and-dry paper.  The area was then coated with a layer of Araldite and allowed to dry for a further 24 hours.

So the result is a cabinet that is secure, but the damage is as visible as it ever was!  I considered spray-painting it, but decided that this would spoil the original appearance of the rest of the cabinet.  The damage is on one side near the bottom, and is not that visible with the set on a shelf with others either side, so I decided to leave it as it is.

I then replaced the mains flex with a modern type.  The on-off switch felt a bit sluggish, and a check with a meter showed it was not closing.  A shot of contact cleaner got it working.  I also applied some to the waveband switch and the volume pot.

I removed the remaining valves and tested them with my valve tester.  The UBC41 had some grid leakage (within limits) and low emission on the triode and both diodes.  Rather than throwing it away, I put it to one side to try in the set later.  The other valves were OK, so were refitted together with good UBC41 and UL41 valves.

A meter check across the mains lead showed open-circuit.  After a few further checks this was traced to the dropper resistor.  However the resistor itself was OK, the problem was that two wires appeared never to have been soldered.  I think it is more likely that the joints were originally soldered but had suffered from heat, but whatever the cause, the solution was obvious – resolder them!

I checked the main smoothing capacitor with my capacitor reformer – it was fine.  The coils on the ferrite rod aerial were loose, so they were fixed back into position using the wax, removed from one of the faulty capacitors.  The original positions were evident from the remains of the sealing paint applied during manufacture.

Time for a test – and it worked OK.  The only minor problem noted was a slight rattle from the speaker.  I then tried the set with the original UBC41 – no difference.

I had an old UL41, which was very low emission according to the valve tester.  I had tried it in a couple of other sets previously, but it did not perform very well.  I tried it in this set and it worked fine, so I left it fitted.  It seems that this set is more tolerant of ageing valves than most.

The cone of the speaker was coming away from the frame in a couple of places, as was the coil support behind the cone.  I refixed both of these with EvoStick glue, but the speaker still rattled slightly at higher volumes.  This could be completely solved by applying slight pressure to the rear of the cone in one area.  It seemed that the cone was slightly distorted, but I could not think of an easy way to solve this.  I therefore fixed it with a bit of a bodge – I inserted a rolled up lump of tissue paper between the cone and the frame, to apply the required pressure to the cone.  To prevent it from falling out, I fixed it to the frame with some EvoStick.

After the chassis had been running for a couple of hours, I was happy that all was well, so it was time to reassemble everything.

The tuning scale was secured back into the cabinet with some EvoStick, before the chassis was slotted back into place.  The set was tested again at this stage, in case the screws fixing the speaker to the cabinet had applied any twisting to the speaker frame and affected my “bodge”, but all was well.

I finished reassembly, including the knobs and back, then gave the set another test run for a couple of hours.  While it was playing I removed a couple of sticky patches (from the adhesive tape used to hold it together while repairing it) with alcohol, then polished it with some spray household polish.

This was not one of my most successful restorations – especially the cabinet repair – but I feel it was the best I could do under the circumstances.  I could have painted the cabinet, but this would have lost the original appearance and resulted in a rather flat look to the set.

I could also have located and fitted a replacement speaker, but it may have been difficult to find one the correct size.  The original works fine with my “repair”, so it is good enough for this set.

A set like this will never be worth much – not that I am planning to sell it!  Indeed the UL41 valve would be worth more than the rest of the set if it was a good one!

Despite the visible damage to the side, the set looks good on display surrounded by other radios, and it also sounds good when it has its opportunities to play.