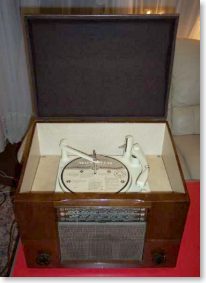 What will they think of next! This tabletop radiogram (Radiogramette I suppose?), was brought to me for assesment and safety checks and to see if I could find a stylus for the record deck. It is complete with all the original instructions and service sheet for the turntable.

It was in excellent condition, having been cherished by its previous owners. The radio part worked well but distorted quite badly when the volume was increased to any appreciable level. (As is common it had been plugged in after its re-discovery). It was fitted with a brown two core PVC flex which the new owner wanted changed to a three core fabric insulated type.

The metal record deck should be earthed through the screen in the coaxial cable from the pick up.

The cartridge fitted to the record deck was neither of the two types detailed in the aforementioned service sheet, but was mono and presumably a ceramic type. 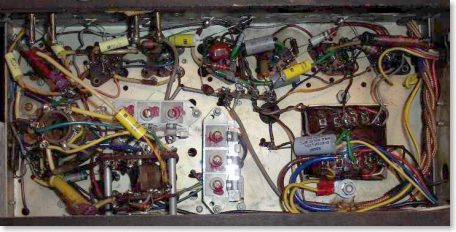 In this case it is certainly best to remove the lid before manhandling this type of equipment to avoid damage to the lid and hinges. The hinge mounting here is quite fragile and the size of lid would make the hinge area vulnerable to damage. Meanwhile I had a quick look at the chassis. It is best to remove the record deck while servicing the radio, as the centre spindle prevents the cabinet from standing level when turned upside down. Then nearly all the components are accessible through a removable panel in the bottom of the cabinet.

There are about a dozen capacitors that will probably need renewing, (a few gobs of wax stuck to the inside of the bottom panel indicated one or more were at least running warm) these are mostly wax paper types, but there are also a few brown Hunts "Mouldseal" . Although around half showed no appreciable leakage (including one of the DC blockers at the output valves grid) I decided to renew them all as a precaution. The first batch were the two grid capacitors for the output valves, and a 0.01uF mains decoupler across the incoming supply. That should help to stop switching spikes from the gram motor getting back onto the mains. Neither of the 6 volt MES scale lamps worked, so these had to be replaced. 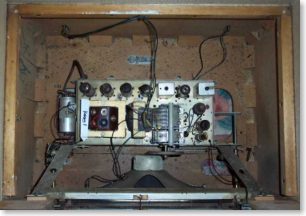 Chassis of this period seemed to use lots of those small brown resistors, which are commonly found to be high in value. Those found in this chassis were typical, with the 100k anode and cathode resistors for the triode phase splitter both replaced as they read high (anode 340k, cathode 180k). This would certainly have upset operation of the push-pull output stage, and along with the leaky grid capacitor to one of the output valves accounted for the distorted output.

The mains flex was changed for the new fabric covered cable requested by the owner, with an earth tag crimped to the earth conductor and bolted to a transformer mounting bolt. The first ten inches of the cable were sleeved with some heatshrink to prevent the fabric rubbing on the case in use.

While the tuning scale glass was removed for cleaning, both the dial lamps were replaced and the rest of the chassis brushed to remove dust. With the other dozen or so wax paper and brown Hunts capacitors replaced the radio part worked very well indeed, with about a 10' aerial pulling in stations near and far across all wavebands with PLENTY of volume.

Even though the smoothing capacitors tested OK, I felt there was more hum than one would expect. Since this was at 50Hz, and the scope showed a low level of AC ripple on the HT supply, I think the hum was due to the fact the output transformer is in close proximity to the mains transformer. Have a look at the picture below, with the turntable removed, and see what you think.

The gramophone turntable worked fine when tested. Tests were carried out without a stylus, to avoid damage, in case anything was wrong with the positioning and put-down. The auto-changer mechanism worked well, dropping the test records perfectly (courtesy of Oxfam record dept!). The only obvious thing apart from the missing stylus was the taped joints at each end of a length of bell wire which had been used to extend the screened cable running from the pick record deck to the input sockets at the rear of the chassis (probably during previous servicing), so was renewed with a new length of screened cable.

The cartridge was removed and taken to a friendly neighbourhood Radio and TV shop, where it was identified and an appropriate stylus selected. The BSR ST15 is a flip over type and is also still available on special order with a tip suitable for 78 RPM records. The test record played well, but when the end was reached the arm reset and repeated at the 7" position adinfinitum. With the help of the service info this problem was eventually (!) traced to a spring at the base of the changer arm. It had weakened over the years so the rod it attached to was not operating the cancel mechanism correctly. I tried a few odd springs I had but none of them worked properly, being either to stiff (tone arm didn't lift and reset correctly) or too slack (made no difference). The owner said he could live with this, so once the moving parts under deck had been lightly lubricated it was replaced in the cabinet and the lid re-fitted.

The finished result was an excellent sound from the record player and well performing radio. With the usual ten or so feet of aerial all three bands were filled with stations, so I considered no alignment to be necessary.

I have included part of the circuit here as I think readers may be interested. Usual ECH81 fequency changer front end, and I.F is handled by the pentode section of the EBF80 (V2), the devices two diodes dealing with the detection and AGC.

So what is the PCF82 for? As can be seen (V3), the pentode section provides extra amplification for the gram and radio signal, which is then passed to the triode section which acts as a phase splitter to drive the grids of the EL84 output valves via C33 and C34.

This is a good example of a push pull output circuit, and boy does it work! I have seen estimates of six watts RMS from this output stage, (that's proper English watts, not your modern peak or "music power" nonsense), which might not seem that loud these days but I can assure you it is more than adequate, having been in a room with it at about half power! Something like this would have been designed to fill a dance hall!

Shame there is no VHF though. Ferguson probably had it all designed before VHF came along.

You will also notice there is an additional tapping on the heater winding to supply the 9V needed by V3 (PCF82). I wonder why they chose that particular valve, and didn't simply use an ECF80 which would not have required modification of the heater supply.

Richard Newman sent the following explanation for why a PCF82 might have been used:

I've just read Tim's account of the table radiogram. The most likely reason for using a PCF82 is because of the higher heater/cathode insulation. The triode is used as a phase splitter and the cathode will be at a higher voltage than usual. Philips did something strange with one of their output stages when they used a cascode pair in a transformerless output stage. This consisted of an EL84 and a UL84 where the UL84 was the 'top' valve with the cathode directly coupled to the anode of the EL84. The cathode of the UL84 was run at a fairly high voltage so the higher heater/cathode of the UL84 was essential.