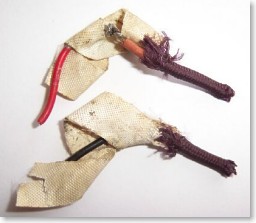 The owner had obtained the Ferguson recently and simply said it didn’t work. It seems to be a later version of Ferguson’s 382U with push buttons added, which were a popular feature at this period. There are separate tuning controls and cursors for AM and FM.

Overall condition wasn’t too bad, but the painted Bakelite is typically worn around the controls. A brief internal inspection showed a broken FM tuner drive cord, but everything else above the chassis seemed fine.

The fabric sheathed twisted twin mains cable, although in reasonable condition didn’t seem original, so I went straight to the mains plug. The rubber insulation looked in good order, but the 5 amp fuse found inside was replaced with a 3 amp.

The other end of the mains flex however was quite a different matter. The two inch tails of the original cable still remained soldered neatly to the mains switch. The conductors of the existing stubs and the replacement mains flex had been KNOTTED together and covered in sticking plaster in an attempt to insulate them from each other.

The sticking plaster had seen better days and was hanging off in loops, probably affected by years of heat. The bodged joints were actually visible between the tape! Of course, it goes without saying the cable had no means of restraint, and was starting to fray at a point where it bent around the chassis. THE SET HAD ACTUALLY BEEN PLUGGED IN BY IT’S NEW OWNER!!

Visual checks are valuable too!! I cut out the bodge and kept it to show the customer. If you didn’t wire it CHECK IT!!

Obviously the first priority was the mains cable, so a length of round section white twin was correctly fitted for testing.

The mains tested OK, with MW selected the heater chain continuity was proved from the mains plug. The output valve was removed and the set connected to the mains via an isolating transformer, safety lamp and Variac. The metal rectifier used in this set makes it easy to re-form the HT capacitors, simply by gradually increasing the mains voltage. This is exactly what was done; monitoring the HT voltage at the smoothing capacitor as the mains voltage was increased over the space of around 30 minutes. While I was at it , the grid of the output valve was checked for for D.C. The Hunts coupling capacitor was obviously slightly leaky, allowing +2V on the grid pin of the empty UL84 socket. 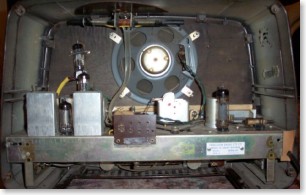 The safety lamp wasn’t glowing at all suggesting all was well with the mains. I switched off and allowed the HT capacitors to discharge through the meter. This took ages(so the capacitors are probably OK then!) so I hurried along the process by discharging them to chassis via a meaty 4K7 resistor.

The output valves grid coupling capacitor was changed for a new one rated at 400v DC. Most of the other Hunts moldseals tested leaky too so all were renewed, along with the low voltage electrolytics in the VHF demodulator and the output valves cathode bypass.

Although similar looking to the 382U, this model has fewer of those horrid Hunts capacitors, which is no bad thing of course.

A quick check of the HT line looking into the set showed no problems so the output valve was re-fitted and mains applied to the set again, with MW still selected. All valve heaters and both scale lamps lit normally. I have found the scale lamps are usually OK on these AC/DC Fergusons. The usual 50Hz background hum was present but no stations could be tuned in on either MW or LW.

The “Gram“ button was pressed, and a healthy buzz obtained when the gram input socket was touched with the blade of a screwdriver. This confirmed the audio stage was working, so what now?

With MW selected HT seemed normal throughout the set, except the anode of the UABC80 triode which was about half the voltage it should have been. The 220KW resistor feeding it had risen in value to around 500K, so had to be renewed.

I decided to check whether the oscillator was running, as there had been a good crackle when measuring the voltage at the anode of the IF amp (UF89), so that stage was probably working. About –3.5volts was measured at the ECH81 triode grid, suggesting the oscillator was running. I began to suspect an aerial fault. Sometimes a set with an aerial fault will come to life when a length of wire (such as a test lead) is connected to the mixer grid. This was the case here with the set suddenly bursting into life (very suddenly - the volume control was nearly at maximum!!) with a lead connected. I traced back through a few components towards the aerial until the set fell silent again as the lead was connected to the far side of a pair of terminals on one of the wave-change switches.

Hang on, that terminal just moved! It was found to be broken near the base, but fortunately there was enough left to solder the connecting wires to. Now LW worked very well, although MW was not terribly good with an aerial connected to the rear socket and both hardly at all when relying solely on the ferrite rod. Still, it was a start and probably a matter of alignment. 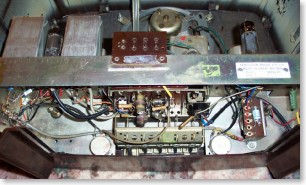 I wondered if any more switch terminals were broken (a result of damage??) and had a close look at all the others. I found another broken switch terminal, this time right at the edge of the FM switch, taking signal to the FM tuner. The wires soldered to the terminal had held it in position giving the appearance nothing was amiss.

A background hiss was heard when the set was switched to VHF, but no station. I think the tuner slugs had happened to be at one end of their travel when the cord snapped. The VHF cursor drive cord is separate from the AM cord, and both were still OK. It was the cord from the VHF drive wheel to the actual tuner module that had broken. Using the unbroken piece of cord and the trimming tool, I was able to move the tuning slugs slowly in their tubes. With a test lead stuck in one of the VHF aerial sockets, stations were heard, although it was quite difficult to tune them in properly without the benefit of the low gearing provided by the dial cord mechanism.

I have renewed one of these cords once before, and it can be done by removing the rear end cover from the tuner module. In this chassis the tuning dial glass has to come out in order to access one of the screws, but the screw only needs to be loosened to remove the cover. While the dial glass was off (Blimey, those knobs were stubborn) it was cleaned front and rear with baby wipes ,along with the scale backing plate and lamps.

The dial cord and tuning slugs were removed from the back of the tuner and laid out on a clean cloth. Be sure to mark each slug at this point as well as the direction it faces. The length of cord between the slugs was carefully measured, and this measurement was then transferred to a new length of cord, which was fitted to the slugs. Both ends of the cord are then threaded through the tuner (use a piece of wire to hook them through) in such a manner that when finished your earlier markings correspond. The cord is then gently pulled tight, and run over the pulleys in the back of the tuner.

A further test was carried out, by means of slowly pulling the cord just to make sure the whole thing worked before everything was put back together (I have been there before and got several T-shirts!). VHF worked well with good quality and volume. The quick test also enables one to find out which position is the low frequency end, in order to connect the drive cord to the rest of the sets tuning mechanism. Fit the end cover before any alignment is carried out. 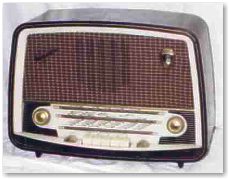 The service information does have a diagram showing the tuner drive cord, but it is easy enough to work out anyway. With the tuning scale re-fitted the VHF band was checked for accuracy, and no problems found. The millivolt meter connected across the volume control peaked nicely as the MW band was undergoing alignment. A few stations could be heard using just the ferrite rod aerial, but moving the adjuster ring on the ferrite rod caused an improvement in volume.

Performance was then reasonable, but Radio 4 was found at about 1400m on the Longwave. Further alignment improved LW accuracy but on MW the set still seemed, well, lack-lustre. Strong stations came in fine, but there wasn’t much inter-station noise and volume wasn’t as I would have expected, the volume control having to be set at near maximum to obtain any reasonable output on all but the strongest signal.

Typical symptoms of low I.F gain. Sure enough a replacement UF89 provided a miracle cure, with excellent performance and volume on all bands. Normal listening volume was achieved with the control at about a quarter to one third of travel. Alignment was re-checked and found to be OK. All A.M slugs and adjusters were locked with correction fluid.

The image on the UM84 was barely visible and hardly changed with tuning, even after it’s anode resistor was replaced. The AGC was seen to change on the ‘scope when a station was tuned in so I assume this is down to the valve. The customer was happy to leave it as it was. Finally the mains flex was changed again for a length of black twin, in accordance with the wishes of the customer.

I suspect this must have been a fairly cheap radio, and the cream paint has worn in several areas, particularly around the volume control. The customer said he was happy to restore the outside, so the front and Bakelite parts were given a quick going over with industrial wipes. The grooved knobs were cleaned with an old toothbrush.

The 300 ohm ribbon cable connecting the VHF wire aerial to the set had seen better days, the pop rivet securing it to the fibre board back had ripped out, and one wire had become detached from the connecting plug. The cable was renewed with a length of new feeder and re-fixed ,this time with a washer behind the fibre board back to prevent it ripping out of the worn hole.

A typical late fifties AC/DC radio, (very late in this case, November 1959) and doesn’t sound too bad at all. The piano key wavechange switching is bound to be a more reliable set up than that used in the 382U/383A. I have come across a few of these Fergusons now, using the same basic chassis and the ECC/UCC85’s always seem to work.