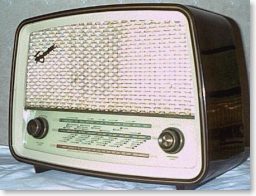 This bog standard AC/DC three band 50's table set was given to me by a friend to repair. He had bought it from an Internet auction site as not working, and wondered if I could get it going again. Overall condition was extremely good with a clean and tidy case with all knobs, back and complete innards. The set even came with the trader sheet! The picture is taken (with kind permission) from Mike Horne's radio site.

Access to most of the underside of the chassis is possible without the need to remove it from the case, protection being provided by a part of the back cover which folds underneath, and is held in grooves in each side of the base.

Upon visual examination I noticed the set had received recent attention from another repairer. He (or she?) had fitted a replacement cathode bypass capacitor for the UL84 output valve (47uF), the electrolytic in the FM discriminator (4u7) and a polyester capacitor in what looked like a de-coupling position (10nF). Hello if you are reading this - and thanks very much for the free bits!

A quick check was made of the mains side (including replacement of the all too commonly found 13amp plug fuse with a more sensible 3 amp), which showed no problems and proved the mains switch and heater chain ok. The original two core PVC sheathed mains cable was of a sufficient length and undamaged. A check of the H.T to chassis gave a good reading for the smoothing electrolytic - no need to reform those then - but once settled showed a slight leak. This was probably due to leaky decouplers but wasn't too serious to prevent application of mains.

As this is a universal or AC/DC set it was run via an isolating transformer for servicing purposes.

The knobs emerge through the recessed glass tuning scale and do not project past the front of the set which is handy as it means you can lie the whole thing on its front, but do protect it with something soft such as a blanket, an old piece of carpet or as I did an old towel folded double.

The dial lamps lit immediately upon application of mains, the series heater valves around twenty seconds later but there was nothing from the speaker except a slight 50Hz hum on all wavebands. A multimeter test probe applied to the UL84 grid gave an encouraging buzz, so all was not lost.

This was unlikely to be down to valves, which if low emission they usually give high anode readings. H.T was normal at the top of all these resistors. Switch off and select ohms range to make a few measurements.

Most of the resistors in this chassis are those little brown ones with rounded ends, which I have found to be troublesome in the past. Sure enough the 220k anode feed to the UABC80 measured about 2M, the 47K screen grid resistor to the EF89 came in at 470K. Its anode feed (15K) was open circuit, as was that to the screen grid of the frequency changer (47K).  These resistors were all replaced by 0.5 watt metal film types which have a higher voltage rating (yes resistors do indeed have a voltage rating which is often forgotten, especially by designers it seems). Having said that, they are nearly forty-five years old!

While I had the meter out, the half dozen or so Hunts Mouldseal capacitors were checked, in particular the output valve's grid blocker. These tested OK with a standard test meter, but along with all but one of the others proved leaky when tested with 250V DC from the megger, so were also replaced. These really are awful things and should be treated the same way as wax paper types and REPLACED. They do tend to go open or low in value (brown types) but the black ones often go leaky or E.S.R (equivalent series resistance) and can really upset the performance of a set.

These were mostly 0.02uF with the exception of the grid blocker (0.01uF) and a screen grid de-coupler (0.1uF).  I tried to get into the VHF turret to check the decoupler at the anode of the R.F amplifier formed by one half of  the UCC85. Access was impossible though without dismantling the VHF tuning drive and desoldering about ten connections. With the valve out and set switched to MW (the valve's HT disconnected), this capacitor seemed to be OK, giving a kick of the needle the size one would expect for its value. (Phew!)

Perhaps the manufacturers had used a better type of capacitor realising that access to the VHF turret would remove partial dismantling of the set. (Howls of laughter from readers at this point). Hmmm.*

Now mains was applied again, via the safety lamp, but this time stations were heard. The set tuned OK up and down the MW and LW bands with good sensitivity and volume. VHF was also working but very quietly and with some crackling which was mostly down to a dirty contacts on the wavechange switch, but the volume control also benefited from a quick spray of switch cleaner.

Voltage was down on the UCC85 anodes, but because the valve protruded from the VHF turret, access to the underside of the valve socket was impossible without removing the cover to the turret. This could not be removed without completely removing the said turret. The valve heaters in this set are connected in series so.... convinced yet?

The valve was pulled out half way, enough to make contact but also to leave enough pin exposed for VERY CAREFUL MEASUREMENT with my smallest multi-meter probes. This fault was proved to yet another resistor, the 15K anode feed having risen to nearly 30K. With this resistor replaced VHF worked fine with good quality and volume but the tuning did seem to be out with BBC Radio 4 appearing where one would expect to receive Radio 2, and Radio 1 at about Radio 4's normal position. Classic FM and a local independent on about 103 MHz were also able to be received suggesting the tuning range could have been shifted in order that a previous owner could receive their favourite station which was outside the range 88-100MHz, all the VHF band covered when this set was designed. The VHF band was fairly lively, sounded good and since the customer was delighted at this extra range the VHF alignment was left alone (besides which I don't have any VHF alignment gear!)

This was extremely good, with the exception of the brass coloured metal trim strip which is noticeably corroded. Nothing else bar a quick wipe over needs to be done.

It is common for the plastic waveband switch actuator cog in this chassis to become brittle with age and crack. Unfortunately this one was typical, with the cog cracked right around its 'waist' (but looks to be superglue-able), and a few teeth missing. This cog meshes with some Bakelite teeth, on a collar around the outside of the hollow stalk on the wavechange knob. Quite a few of these teeth were also missing (they weren't in the bottom of the set -I looked!) but it may be possible to turn the knob through 180 degrees and use teeth on the other side. The knob has a pip for indicating the selected waveband incorporated into its rim so this may look a little strange. It MIGHT be possible to obtain another knob or move the cog slightly along the shaft to mesh into the last 1/4" of undamaged teeth. I may even try to mould some more teeth from car filler. The customer has said this one will spend the rest of its days on the VHF band so that won't be too important. I shall still try and get a knob though, and contact him when I have it with a view to replacement. If any one has a spare I would love to hear from you: timothy.pullin (at) bt.com

A surprisingly good sound and performance representing good value for money from what must have only been a fairly cheap radio.

*I have spoken to some other radio restorers who tell me the capacitor inside the VHF turret is an 1800pf tubular ceramic type.