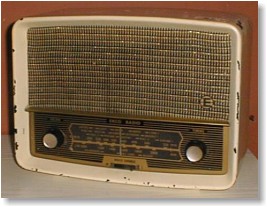 This set was to be given to my partner's mother on her birthday. Her parents (my partner's grandparents) had previously owned the same type of set. I knew the set would be playing the local Classic Gold station all day every day, so reliability and cool running were important considerations.

I already had one example in my collection that had a broken (repaired) cabinet, no back, wrong knobs and print flaking from the tuning scale.

I purchased a second example at the Autumn 2001 NVCF for £5. All the valves were missing (there was a note attached to this effect), but it was otherwise complete. The tuning scale was good, the case was not damaged and it had a back and the right knobs. However, the case had been previously badly painted white, which was chipped and flaking.

The idea was to make one good set from the two. However, the newer set was the best in all regards, so the older one remained untouched.

The set was originally released in 1955. It receives MW and LW. It is an AC/DC model using UCH42, UF41, UBC41, UL41 and UY41 valves. With an original selling price of £11 it is clearly a low-cost set. This is confirmed by the lack of simple refinements such as a tone control and dial illumination.

The underside of the chassis contained a number of wax-paper capacitors doing what these do best (leaking electrically and leaving a horrible sticky mess). Because of the requirement for reliability, these were all replaced with modern components. I checked all the resistors, and found them all to be well within the 20% tolerance.

With a set of valves fitted, the set worked well. The on/off switch (part of the volume control) was intermittent and the control was noisy and rather abrupt at the lower end. I replaced it with a modern component. The original was 500K but switched pots are not available in this value. I used a 1M pot and fitted a 1M resistor in parallel with the track. I replaced the mains flex at the same time.

No other electrical problems were found. The alignment appeared undisturbed and the reception suggested that it did not require attention.

The top of the chassis was quite dirty, mainly as a result of the original anti-modulation hum capacitor (connected across the mains input) having blown itself to pieces and covering everything in wax which had then attracted dust and grime. I cleaned it with Electrolube Ultrasolve (thanks for the suggestion Darren), taking care to keep it away from the IF cans and wax coated mica capacitors.

I replaced the tuning drive cord, which had broken during the repairs. This one is simple, and is clearly shown on the service sheet (Trader 1309).

The main problem with this type of set for continuous operation is the amount of heat produced by the dropper resistor. This is situated next to the rectifier and output valves, resulting in a lot of localised heat. 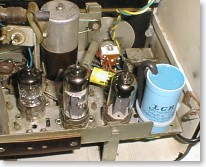 I decided to fit a capacitive dropper. While working out the capacitor value required, I wrote the Dropper Calculations page (hence the choice of valves in the example set on that page). The calculated capacitor value was 1.56uF. The nearest available was a 1.5uF, 440V motor run capacitor. I temporarily connected this in conjunction with a 120-ohm 10W surge limiting resistor and a 220 k-ohm discharge resistor. A meter in series showed a heater current of 97mA. With an additional 0.1uF capacitor in parallel the reading was exactly 100mA. This is from a mains supply of 240V.

I removed the original dropper resistor and fitted the capacitor in its place. To do so I needed to drill the mounting hole in the chassis out to 8mm diameter. I fitted a small piece of tag strip on top of the chassis to mount the additional capacitor and discharge resistor. The surge limiter resistor was connected between here and the on/off switch. A 250-ohm 5W resistor was fitted below the chassis between the on/off switch and the rectifier anode, to replace the relevant section in the dropper resistor.

With the modification done the set ran a lot cooler. This sort of modification will never look original, because of the number of modern components that need to be added. However, in this case reliability and cool running were much more important than authenticity.

I replaced the selection of odd valves I had used for testing with a complete set of new valves. Again, this was for reliability. Most of the valves were NOS (new-old-stock) Zaerix branded devices made in Hungary. The UL41 output valve was a Philips.

The speaker frame was rusty, with most of the paint flaking off. The sound it produced was distorted due to the coil fouling on the magnet. The fine braided wires from the tags to the cone were green with corrosion. I decided it wasn't worth trying to restore this, so binned it. 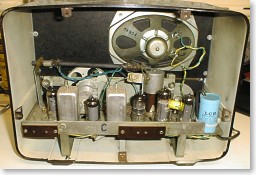 I have several speakers from 1950s Bush sets. These are a similar shape and size, but the fixing holes are in different places. They also give good sound quality (made by Celestion).

The speaker fabric could be removed easily from the speaker end of the baffle board, which allowed the heads of the original screws to be accessed. The nuts and screws were rusty and difficult to release, so a little WD40 was applied. After leaving them to soak for a few minutes, they came undone easier.

I drilled the baffle board to suit the new speaker, and fitted it using new screws and nuts. The original speaker had a link wire between one terminal and the speaker frame. I fitted a solder tag under one of the fixing screws and connected a length of wire to make this connection.

I blackened the heads of the screws with a permanent marker pen, so that they would not show through the fabric, then refitted the fabric using UHU spray-mount adhesive.

The set was reassembled, and then left playing for several hours. The top of the cabinet was scarcely warm. I know from experience that these sets when fitted with the original dropper resistor become almost too hot to touch after a couple of hours. The modification was clearly a success, and is something I will do again when faced with small hot-running AC/DC sets.