Made in Japan, this radio was released by the Pye/Invicta group in the early Seventies. It uses 11 transistors, 6 diodes (including one varicap) and one bridge rectifier and operates on either four "C" cells or AC mains. Covering Long, Medium and Short wavebands, together with FM, the circuit uses a mix of silicon and germanium transistors.

Unusually, this radio uses a completely separate IF strip for AM and FM, with only the audio stages commoned. The FM section employs silicon transistors throughout, while except for the mixer/oscillator, the AM and audio sections use germanium devices. The output stage is balanced push-pull with driver and output transformers. On FM the varicap diode is utilised for AFC. The chassis and ground rail are connected to the positive side of the supply. This radio arrived with very noisy volume and wavechange controls, and as I discovered later, intermittent FM reception. 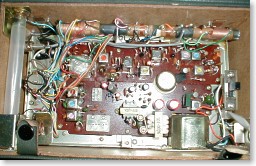 The first job was to clean the controls with a shot of switch cleaner. This was completely successful, and I was rewarded by clear reception on all three AM wavebands. I also noticed a distinct background hum, cured by replacing the rectifier's reservoir capacitor. Bearing in mind the age of the set and the distance it had been sent for repair, I replaced all the electrolytics with new 106degC types. However FM only worked intermittently, and as it turned out there were two faults.

Dismantling this set is a fairly complex job involving removal of several unmarked screws. The the FM antenna lead (blue) has to be unsoldered from the telescopic antenna. Likewise the brown "live" and black earth leads from the external antenna socket. After removing the knobs the chassis can be withdrawn leaving the speaker leads connected. "Chassis" is the word to use as well. This radio is built like many TV sets of the time, with printed circuit panels mounted on a metal framework. There are actually two PCBs, the upper carrying the FM circuitry, and the lower the AM sections, the audio stages and a bridge rectifier for the mains supply. Several wire links interconnect the panels. The tin can at the lower right contains the mains transformer and the slide switch immediately above right selects mains or battery power.

Needless to say all the VHF RF section of the PCB was under the tuning capacitor's pulley, so I had to remove the tuning scale, drive cord and pulley. My first check was for operation of the IF strip by holding a screwdriver blade and touching the tip on the FM mixer/oscillator's collector pad i.e. using myself as an aerial. (Safety note: tests of this type should not be undertaken on valve radios as there is a risk of sustaining a nasty shock). I was initially rewarded with silence, but lightly pressing on the board resulted in the expected shortwave noise (the 10.7Mhz FM IF corresponds to around 28 metres in the shortwave band). 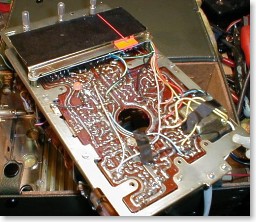 Further careful tapping narrowed the problem down to a dry jointed diode lead in the ratio detector. After resoldering this and a few other dodgy looking joints the IF stages worked steadily. But now FM reception had failed completely. Now should the RF amplifier fail the characteristic FM "hash" is present and the strongest stations will still be audible. A general absence of life, assuming the IF stages are known to be working, is almost always down to failure of the local oscillator.

After checking various voltages around the stage, out came the original mixer/oscillator transistor, and in went a 2N2222. No joy. Next I tried a BF180. Again no joy. Unfortunately, due to the current obsession with surface mounted devices, the range of leaded RF transistors listed by the mainstream suppliers is now quite limited. Of the listed types the ZTX320, a tiny "E line" VHF transistor, seemed a good compromise between price and performance. It's a high gain device with an Ft of 600MHz. After fitting one of these, success! I also changed the 5pF collector-emitter coupling capacitor just in case. According to my Peak DCA50 component tester the original transistor was working with an Hfe of 55. That's about what you would expect from a run-of-the-mill small signal RF transistor. The ZTX320's Hfe was 150 though.

After a few hours' soak testing I reassembled the tuning drive and refitted the chassis into the case. According to the tuning scale the FM oscillator alignment was way out, and to restore Radio 2 to it's correct position (88.90MHz from Holme Moss) I needed to squeeze the turns of the oscillator coil closer together. Strangely, no adjustment was needed at the top of the band: all my local radio stations were in their correct places. The new transistor's internal capacitances were obviously lower than the original device's, requiring an increase in oscillator coil inductance to compensate. After this FM reception was every bit as good as a contemporary receiver. To finish off a small amount of paraffin wax was melted around the oscillator coil and replacement transistor to prevent movement and possible microphony.