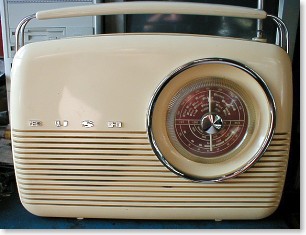 How's this for a classic - a 3-band Bush VTR103 from 1962, with VHF coverage from 88 - 100 Mc/s. The report was no reception, just crackling. I connected the receiver to my bench power supply set at 9V, and was rewarded with a current consumption of about 20mA. So there was obviously no serious fault present.

Compared with most radios of the time, this set is fairly complex. Unlike the 2-band TR82, the RF/IF stages use the then new Mullard alloy-drift transistors. Starting from the front, the VHF tuner has an AF114 RF amp followed by an AF115 self-oscillating mixer. The LW/MW mixer oscillator (that acts as the first IF amplifier on VHF), and the two IF amplifier stages employ type AF116. The VHF IF is at 10.7Mc/s with the AM IF at 470kc/s. The audio stages use an OC71 as pre-amp, OC81D driver and two OC81s for output. The output stage is very nice - transformer coupled balanced push-pull with a meaty valve-radio sized output transformer. An OA90 is used for AM detection, while the FM discriminator employs two OA79s.

I decided to tackle the loss of AM signals first. Touching the wiper of the volume pot gave healthy mains hum, so the audio stages were working. It never ceases to amaze me how quiet germanium amplifiers can be compared with modern silicon circuitry. Measurements around the three AF116s revealed voltages close to those stated in the service sheet. The large TO7 AF11x range all suffers from a peculiar pathology where the collector develops a short circuit to the case (it's down to a conductive whisker forming in the silicone compound used to protect the transistor wafer). 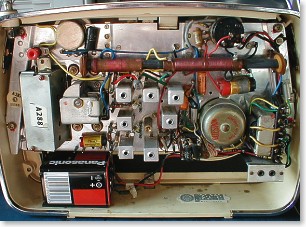 Not in this case though. Further heuristic signal injection (touching various points with a screwdriver in contact with my finger!) resulted in hash when I contacted the base of the final IF amp, but nothing when the test was repeated on the preceding stage. So I replaced the first IF amplifier with an AF126, which is the later version of the AF116 in the much smaller TO74 can. Voila - up come medium and long wave! But still no VHF.

Heuristic signal injection when switched to VHF should result in short-wave noise (10.7Mc/s corresponds to around 30 metres), but I couldn't raise a cheep anywhere while poking about in the RF/IF stages. So I decided to try the "official" method: out came my trusty Advance E2 valve signal generator that I allowed to warm up for the recommended 20 minutes! While waiting I checked the two OA79 diodes in the discriminator, both OK. Upon injecting a high-level amplitude modulated 10.7Mc/s into the collector of the final IF amp, I was rewarded with the expected distorted 400c/s tone, but silence when I transferred the probe to the base. So what sort of a transistor fault can give correct DC conditions as well as satisfactory operation at 470kc/s? I've long given up applying what some call "logical deduction of fault conditions". So in went another AF126. Result! Short-wave noise when I touch the VHF tuner's IF output. Still no VHF! 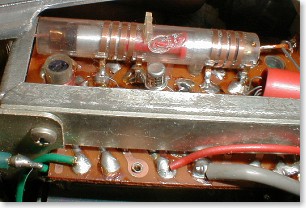 The VHF tunerhead in these receivers uses a permeability-tuned arrangement with an RF amplifier and self-oscillating mixer. Access is easy, simply undo two 6BA nuts and the tuner housing can be slid off, revealing both sides of the PCB and the permeability tuner with its cord tensioning spring. Again, voltage checks around the two transistors tied in closely with the figures in the service sheet. Now where I live in Runcorn, I am not only situated at the top of a multi-storey building itself sited on top of a hill, but I'm in Holme Moss' primary service area, and surrounded by strong local radio transmitters. I have to be very careful when servicing VHF/FM receivers, as signals here are so strong across the band that a set with a dead RF amplifier can still hit limiting level. So in my workshop, a VHF radio with working IF stages but no reception means one thing: a dead mixer/oscillator.

After replacing the AF115 with an AF125, I was rewarded with excellent VHF reception and, surprisingly, no realignment was needed after fitting the physically much smaller AF125 - all stations appeared at the correct points on the alignment check dial. Something else that surprises me is how low the inter-station noise is on these old receivers. I've noticed this with most early Sixties stuff I've serviced; there's nothing like the raucous hash you get with modern equipment. One thing I did notice with our crowded VHF band was "birdying" down to poor image rejection, although this was significantly reduced when the tuner's screening can was refitted. However, this is a forty-year old radio originally designed to receive just three widely separated stations at nothing like the field strengths we have today. 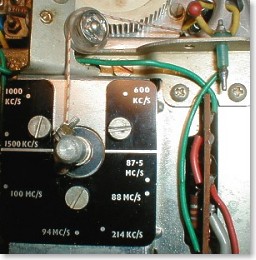 All of the electrolytics were those attractive plastic two-tone Plessey parts that I liked as a boy, and still like now. Even the labels were in good nick. Experience has shown that these capacitors are pretty reliable even after all these years. The low quiescent current proved that none of the decouplers were leaky, so I left them all in place.

Likewise the Hunts moulded capacitors. Now I know these had a very bad reputation when fitted in valve radios and TV sets. The cases crack and the paper dielectric becomes leaky. I remember when I were but a lad, watching Hunts Supamolds going up in a puff of smoke when a particularly ratty old radio was first plugged in after years of disuse - those were the happy days before the Safety Nazis confined us in their cotton wool straitjackets! However in a transistor set the capacitors aren't exposed to the high temperatures that damage the moulded casing, nor are they run at anything near their rated voltage. I've never had reason to change a Hunts moulded jobbie in a transistor radio.

I really dreaded one part of the job: removing the chassis. This is held in place by four screws that are easily removed, but you also need to pull off THAT tuning knob! And after 40 years was it tight! The recommended method of removal is to pull it off with a sink plunger, but having run out of those I had to resort to other methods. One thing you must NEVER do is try to prise the knob with a screwdriver - this method is guaranteed to crack it. I had to ease my not particularly dainty fingers under the knob, helped a bit by longish nails, then slowly and carefully rock it back and forth while gently pulling. After about five minutes the knob relinquished it's grip on the tuning gang's shaft. This radio has great sentimental value to its owner so I had to exercise the greatest of care. There's a moral there: avoid trimming your nails before dismantling an old Bush radio!