This Bush VHF71 repair story was kindly sent to me by John Bean.
This is John's first restoration, and he has asked a few questions which I have answered (in italics) in the text below. 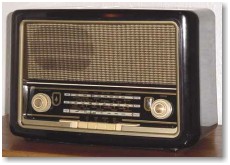 During my initial assessment I discovered that some modification had taken place. The first component found to be faulty was the dropper resistor which was open circuit, studying the circuit diagrams I found that C59 had been cut away leaving the leads "poking" out.

The mains lead had also been cut away and was connected directly to the voltage adjustment plate where by applying mains AC "L" or "N" to the heater chain and the dropper resistor, bypassing the switch altogether. 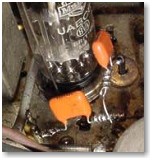 I also checked the output transformer and speaker with a 1V battery and this showed that these were still working. Clearly as a result of the dropper resistor becoming open causing the whole set to fail someone attempted to repair the set with little success.

Since I now knew what the problems were, I obtained 2 0.1uF 500v Metallised Polypropylene capacitors and used them to replace C53 & to reinstall C59, both of which were wax paper capacitors.

With the dropper being open I replaced it with a 100 ohm 10W resistor, similarly R33, a 400 ohm unit was replaced with a 470 ohm 3W unit as the original had sustained some physical damage.

I turned my attention to junction "mess", fashioned a new "pin" with insulating sleeve and remounted it through the chassis. Ensuring that I followed the circuit diagram precisely I resoldered the connections in place using the little coil method.

With everything in place I rechecked all connections with the circuit diagram to confirm that no mistakes had been made, connected the radio to the series lamp limiter and cautiously switched on. The dial lamps light up immediately and about 30 seconds later the heaters began glowing and the speaker slowly came to life.

Performing a few checks showed 220V DC HT, 102V on the anode of the oscillator V2. Reading the data sheets for the valves I noticed that the heaters all operated at different voltages but all are at 100mA.

I checked this however I obtained 2 readings on each heater, the first method was to connect one probe of my meter to the chassis and the other to the heater pin, the second was to simply connect both probes the either pin of the heater to get a reading. Naturally the first method gave a much higher reading, in excess of that stated in the valve data sheets, but the second reading was as the data sheets advised. Please could you clarify the term "across" for me, this suggests to me that you would take a reading by connecting both probes to each heater pin or on each lead of a resistor or capacitor?

I then checked C51 as you suggested and found that the voltage on either side to be 0V. I understand what you say in your web site but if you wouldn't mind could you explain further the extreme importance of this and why it would destroy the output transformer?

C51 is the coupling capacitor to the grid of the output valve. In fact you should have had about 80V on one side and 0V on the other side. Its purpose is to allow the AC signal (the audio) through to the valve, but not to let any of the DC voltage on the preceding valve through. It is important that the DC voltages around a valve are correct - this is known as "biasing". This is particularly important for the audio output valve, because a lot of current passes through this valve and the output transformer.

If the capacitor was leaking, then some of the DC voltage from the preceding valve would get through. This would upset the biasing of the output valve, and cause more current than intended to flow through the valve and output transformer. You don't need much leakage in the capacitor to make the current increase quite a lot. This increased current could damage the valve and the output transformer. It could also damage other components in the set. This is a very common fault in a lot of sets, which is why it is so important to check it. - Paul

With the unit running and having no bangs or smoke and things like that, I left it running for about an hour, tuning in the few stations I could on MW. I found the sound to be typical of MW with slight interference but selectivity and sensitivity to be good. Sensitivity picking up fairly weak stations and with narrow bandwidth on the selectivity. VHF and LW giving the same results. As far as I could tell with my limited knowledge all seemed to be well.

Fortunately the cabinet, grill cloth and knobs were in very good condition, so I used Brasso and a toothbrush to clean them. With little effort they all came up a treat, the knobs returning to their original ivory colour and the cabinet coming up smooth and shinny.

I think I have been very lucky with this set as there was not to much wrong with it and there were no missing parts. It was also in extremely good condition when I got it, but unfortunately I do not know any of it's history. I have learnt a lot during this restoration and it has been extremely enjoyable.

These 1950s Bush sets are a good choice for those starting to repair and restore sets because they do not normally present any great problems. The circuit is fairly standard and the valves are readily available. The VHF models do have quite a lot of capacitors that often require replacement though.

The radio now sits on top of a set of oak chest of drawers that I have also restored and it comes to life most evenings singing away in the corner.

I have one more question for you, what is the purpose of the tuning indicator and what should it do? The reason I ask is because it has a very faint green glow which does not alter when tuning in MW.

As shown in your photo, the tuning indicator is indicating close to minimum signal strength. With a strong signal the green section should widen (like a Chinese fan), and further green sections should come up from either side to meet it (the action varies with different types, but the lit section almost always expands). It should work the same whichever waveband you are on.

A new tuning indicator will be fairly bright, and the green glow will be visible in normal room lighting. However these indicators soon age and become dim, requiring a dim room or a hand to shield the light to see them. You can replace them, but I would suggest you don't do so until it is very dim because there are a finite number of NOS (new old-stock) parts remaining and we don't want to use them up too quickly! - Paul

John has now emailed me with the following additional comments about his set:

I must admit that I am well impressed as to how my efforts worked out and the set looks fantastic on your web site. I took note of your comments and found them to be of great help, especially when I investigated the magic eye further, but alas it appears that maybe the eye is a little old since all the resistors checked out fine (in fact I have found an excellent site that goes further into the workings of a magic eye and I thought that you might like to include it as a link: http://www.megabaud.fi/~jtolonen/ga/peakmtr/peakmtr.html - it maybe of interest when associated with my questions).