He sent it in the form of his restoration notes plus an accompanying explanation. I have left it in the same form here.

Some restorers may feel that the modifications carried out by Ranulph to improve the sound quality of the this set are a little excessive. However the modifications could be reversed at a later date if required, and Ranulph clearly wants a set that is pleasant to listen to with today's broadcasts. The subject of modifications is discussed on the Modifications page in the Repair and Restoration Information section of this website.

This set was probably made in 1955 (the service sheet is dated June 1956), and is a first generation AM/FM table receiver.  It was bought for £5 at the local junk shop at the same time as the Baird 301.  Although very dirty and somewhat tatty, it seemed in basically sound condition; there was little evidence of previous ‘repair’ work.  The most obvious problem was the rubber-insulated wiring, which would all need replacement.

The case is more imaginative than that of the Baird: the material is the ubiquitous (walnut?) veneered 3/8" plywood, but the front and top appear as one piece, with a sharp curve at the top.  The front (and the chassis) slope backwards towards the top, giving the set a tall, slim appearance.  Instead of a piece of cloth, an extruded aluminium grille covers the loudspeaker baffle; there is a full-width glass tuning scale beneath.  A discrete frame surrounds the grille, tuning scale and control panel; both this and the control panel are in a contrasting light-coloured wood.  The overall appearance is potentially impressive and attractive.  The inspection cover underneath is of solid ply with a gap around the edge for ventilation.  A large elliptical loudspeaker is fitted to the baffle.

The electronic design is unusual: it features a permeability tuned double-pentode FM front-end (similar to the Jason tuner) and an FM audio preamplifier making use of the AM local oscillator. There is a magic eye tuning indicator inset into the loudspeaker grille.  The audio amplifier has a anode-to-anode feedback variant, with the feedback taken from a tertiary winding of the output transformer.  The set is heavily engineered, and gives the impression of being an existing AM design updated to take FM. There is a ‘special’ AM/FM switch running the width of the chassis, and operated by cam from the wavechange switch proper. The FM front-end is mounted in a screened box above the AM tuning condenser. Access to components is not easy (especially those in the FM front-end) because of the '3-D' nature of the construction.

The following 'improvements' are easy to remove if not wanted!

The FM distortion was checked by applying a modulated signal to the aerial input and measuring the output on the loudspeaker terminals at a level of 1V RMS.  It was about 1% at 75kHz peak deviation.

2W of audio power were available at the onset of clipping.

After modification, the AM bandwidth was about +/-6 kHz at -6 dB.

The FM sensitivity was about 100mV to achieve 2V peak-to-peak at the volume control, at the centre of the band.  (The sensitivity falls away towards the edges of the band.)

General: The set is of impressive appearance and solid construction.  It receives both FM and AM (LW and MW).  The AM circuitry is fairly conventional, but the FM circuitry is unusual in a number of respects, such as the use of a 19.5 MHz IF and audio preamplifier.

Component Replacement:  As usual for sets of this era, there were numerous Hunts paper capacitors to change - their cases all disintegrated on touching.  I kept the HT triple reservoir capacitor, as it had already been replaced (with the original type).  A check showed that the leakage currents were low, and that the capacitance values were still correct.

There was a fair amount of crumbling rubber-covered cable, including the speaker/magic eye connections and the frame aerial.

Replacing the capacitors was awkward in places, especially in the VHF tuner, because of the 'three dimensional' nature of the construction.  I didn't feel that paper capacitors were particularly suitable for the VHF front-end, and I used ceramic disc components instead.  (They can't normally be seen...)

One resistor needed replacement, as did the magic eye tuning indicator. The other valves showed signs of having worked for a living, but were electrically OK. 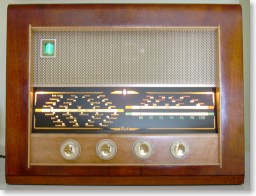 Cabinet Polishing:  The cabinet had suffered badly as a result of being left in the sun, and the finish was beyond salvation.  I am normally very reluctant to strip original finishes, but there was little choice here.  It would have been ideal to use the original-style cellulose for the repair, but this presented a problem.  As far as I know, spray-on cellulose lacquer is now only available in 'clear', whereas the original was heavily dyed.

Although some people may not approve of this, my answer was to use French polish.

Despite its reputation, I have always found this to be durable, but it is very important to check that it is never exposed to heat or sunlight.  You have to prepare the surface well and to be patient: the process is tedious, to say the least.  However, the results can be very good.  The appearance is a reasonable match to the original cellulose.

Polishing the Bush was made much more awkward by the light-coloured (sycamore?) 'picture-frame' around the dial and loudspeaker grille, and by the logo on top of the cabinet.  I finished the light-coloured wood in satin polyurethane - another despised material - but I think this is acceptable for small areas.  I wouldn't dream of using the stuff for larger areas, as the results are almost always horrible.

FM Performance:  The FM circuitry, with its 19.5 MHz IF and audio preamplifier, is odd but works quite well.  The sensitivity is much the same as for the more standard arrangement with a 10.7 MHz IF.  However, it does fall off a bit at the edges of the band, since the RF stage is fixed-tuned to the band-centre.  I carried out my usual modification of adding a very small amount of capacitance between primary and secondary of the ratio detector to improve the linearity.

The one serious problem with the FM design is that the AGC action is rather weak.  As a result, the audio preamplifier overloads at modest signal strengths.  However, it is easy to apply AGC to the RF amplifier: add a 1 nF capacitor in series with the grid, and connect the grid to the AGC line via a 100 k resistor.  (The AGC appears on the coax cable from the output of the tuner.)  It is a good idea to change the valve to an EF85, which is the vari-mu version of the EF80.

Modulation hum was a problem with the internal FM aerial in use.  I found that it helps greatly to bypass each rectifier anode to the cathode with 10 nF capacitors. It is better still to use an external aerial. I have found that these early sets are fussy about the signal quality, probably because they lack efficient limiters.

AM Performance:  The service sheet mentions that an extra resistor is switched in series with the cathode of the IF stage, on AM only, to prevent instability.  This intrigued me, as it is not a normal precaution.  I found that, for some reason, the IF transformers were undercoupled, resulting in a very peaky response.  Small capacitors (about 2 pF) between primary and secondary of each transformer provided a sensible bandwidth of about plus-and-minus 4.5 kHz.  I could have removed the extra cathode resistor, but didn't do so.

As I mentioned before, in connection with the Baird 301, a high-value resistor (22 M) from the screen-grid of the IF stage to the detector load greatly improves linearity at high mod levels.

The frame aerial works well and is efficient at rejecting interference.  Of course it necessary to have the aerial connected when carrying out alignment of the AM front-end.  Unfortunately, the trimmers are difficult to reach with the chassis in place.

Loudspeaker:  The loudspeaker had also suffered through exposure to sunlight (through the expanded aluminium grille) and the cone was cracked in a couple of places. Although it still worked after a fashion, I felt justified in replacing it. A 6" by 9" car speaker fits the hole in the baffle neatly, but the mounting studs need moving. One problem is the significant leakage inductance of the output transformer. This doesn't matter with the original speaker, as the impedance of the voice-coil rises with frequency. The same isn't true of the newer speakers, which generally contain built-in treble units, and the result is that the response falls with frequency. To overcome this effect, I applied a small amount of additional negative feedback via the bottom end of the volume control.

Details are given on my 'Repair Summary' (above). Some HF compensation is needed (as shown) to prevent instability. Changing the speaker in this way might be a desperate measure, but the sound quality is much better as a result.