I bought this set for a fiver at the autumn 2001 NVCF. It was originally priced at £10, but reduced to £5 in the afternoon. 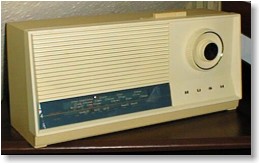 The cabinet is slightly damaged in a couple of places. There was a mark on the top where a can of wood-stain had been placed, and another mark resulting from a spill of this stain. Both these had eaten slightly into the plastic. The whole set was fairly dirty, and the seller did not know whether or not it worked (which usually means it doesn't). The set had obviously spent some time in a shed, garage or workshop.

This set is one of a number of this type released by various manufacturers in the very early 60s. It is a transistor set, but styled and packaged to be a table set rather than a portable. Some sets, like this Bush, were battery powered only, while others were mains powered. They tended to have larger speakers and be capable of better quality and often greater output powers than portable sets. However this class of sets never really caught on, because most people buying transistor sets chose portables (even though most probably never moved from their traditional home on top of the fridge).

With a PP9 battery fitted, the set did work - which was a surprise. However it did not seem to be working as well as I thought it could. An obvious fault was a distorted sound at lower volumes. It also sounded a bit off-tune and shrill, and there was a significant thump sound as the tone switch was operated.

The set comes apart fairly easily. The rear case section is held with two screws, and this gives sufficient access for most servicing work. As with the TR82, this set is built on a metal chassis with conventional point-to-point wiring.

Operating the set like this, I found that the "distortion" came and went as the chassis was handled. I realised that it was not distortion at all, but a rattle caused by the vibrations from the speaker. With the set off I could hear the rattle by gently tapping parts of the chassis with my finger. It seemed to be coming from around the vertical plate that holds the switches and controls, but I couldn't pinpoint it more accurately.

I decided to dismantle the set further. The chassis is fitted to the case front with three screws, but before these are removed the plate behind the tuning scale needs to be removed to release the tuning pointer. The knobs must also be removed by pulling them off. The speaker and output transformer are held with four further screws (only two in my set).

The rattle was eventually traced to the joint where the vertical plate is fixed to the main chassis. It is held with three rivets, but was still slightly loose. The plate is bent away from the chassis slightly, between the rivets, presumably to prevent rattles. However it was still in contact in one corner. Bending this out slightly by inserting a screwdriver and twisting seemed to fix the problem, but we won't know for sure until reassembly.

The OC45 used for the second IF stage had clearly been replaced previously. It was not a particularly tidy job, and it looked as though a second-hand part with short leads had been fitted. The OC44 and OC45 transistors are normally marked with coloured spots on the top of the case. The OC44 (mixer-oscillator) usually has a yellow spot, the first IF OC45 an orange spot and the second OC45 IF a blue spot. I have no idea what these signify. I checked the few OC45s in my stock with my transistor tester and could not find any significant difference in 'hfe' (gain) between orange and blue spots. Orange ones are possibly slightly higher gain, but I only have a few of each so it is not really a large enough sample. There is nothing in the transistor data books about this.

However, the replacement OC45 in my set had an orange spot, where it should have been blue. Since I would need to remove it anyway to fit it tidily, I decided to fit the correct type instead. I found a blue-spot OC45 with sufficiently long leads, and made the correct coloured sleeves for the leads using pieces of wire insulation. The result still looks like the transistor has been changed because the sleeves are not the same shades as the originals, but it looks like it has been done properly and not bodged!

The change didn't make any noticeable difference to the performance of the set, but I did not carry out any gain checks to prove this either way.

The next item to look at was the pop when the tone switch was operated. This switch simply switches a capacitor and resistor in series, between the base of one of the audio transistors and chassis. The capacitor was a 0.25uF Hunts Mouldseal type, and as it typical with these the case was cracked.

Since there was nothing else to go wrong (the resistor checked OK with a meter) I removed the capacitor and fitted a modern replacement (0.22uF). This solved the problem.

I was not convinced that a Hunts Mouldseal in its usual state would cause problems in a transistor set, so I tested the removed capacitor. The test meter indicated a resistance of 800K and a capacitance of 0.7uF. Resistance should of course be open-circuit, and capacitance somewhere near the marked value.

The set contained a number of these Hunts capacitors, all of which were cracked. I decided it would be interesting to hear the effect of changing some of these. I started by replacing five capacitors in the audio stages. Although it is difficult to state a definitive effect, to my ears the set sounded clearer after the change. I checked the removed capacitors, and all showed some leakage and too much capacitance. To make sure my meter wasn't lying to me, I checked a few using the LCR bridge at work, which confirmed my readings.

This was enough to convince me to change the rest. Since they are mainly decoupling I wasn't expecting it to have much effect. However the set did seem to tune into stations better, and it did seem to fix the slightly-off-tune sound.

I also removed a couple of the electrolytics for testing, and these were OK. There was no audible difference between the originals and new replacements, so I refitted the originals.

It was an interesting experiment. It proved that the deterioration of capacitors in transistor sets does have an effect, but nowhere near as significant as in valve sets. It may well be more relevant in VHF sets - we will see this when I get around to doing my Bush VTR103.

If you have a transistor set that you intend to keep (and use, rather than leave sitting on the shelf), and it contains Hunts Mouldseal capacitors, it is probably worth replacing them with modern equivalents. It is worth buying capacitors of the same shape and similar size to do a neat job though. I used the orange dipped polyester PCB types, and they didn't fit in very tidily. Since my set is not a pristine example, and the capacitors cannot be seen when it is assembled, I'm not that bothered.

With the electrics working, it was time to tidy up the cabinet. I started by fully dismantling the cabinet (removing the tuning scale, battery connections etc.) then washed all the plastic parts in warm water and washing-up liquid. This removed a lot of the grime, and for the first time I could see that the front section was actually a lighter shade than the rest of the cabinet.

However the washing didn't do anything about the wood-stain marks. After trying various things I concluded that sandpaper was the only solution! Once I was down to the right coloured plastic I used a fine wire wool followed by Brasso wadding to achieve a smooth finish. I then finished with ARD Silicone Refinish which is basically a spray-on silicone polish.

Once the set was reassembled (using the full compliment of screws) it worked well and looked good. Obviously the areas that were damaged (particularly where the can was) are still visible, but now they are the same colour as the rest of the cabinet they don't stand out.