This transistor portable is something of a classic these days, and this one has possibly the most commonly found "C" colour and trim combination. Although I have been after one of these for some time, this set was actually a customer repair and as can be seen from the picture the overall condition is very good. The report from the customer was "Doesn’t work". He had fitted a new battery though, which would make my life easier.

Here is the set on my hall table. The pencil drawings are by my wife Jacquie, which is why I ask her to do the arty bits on my radio cabinets.

There was a slight “pop” at switch on and a slight hiss audible with an ear to the speaker, which indicated the output stage was working. 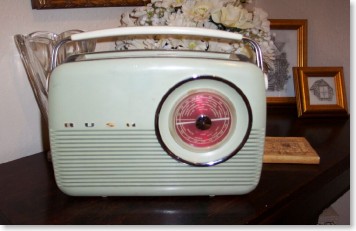 When the back was removed I noticed this set used three of the dreaded AF117 transistors for the Mixer and RF stages.

It’s a long time since I have tackled a transistor set, and I remember reading somewhere these type of transistors (and AF115 and 116) are prone to developing internal short circuits usually between the collector and screen.

In most cases the screen lead is connected to the chassis or 0v line of the circuit, and obviously this would effectively short circuit the transistor. Depending on where this occurs and the type of circuit, this phenomenon can also result in reduced battery life, as excess current flows via the low resistance path.
Cutting the screen lead on these transistors can often restore normal operation. In many cases they will continue to work quite happily for many more years. Thanks to everybody on Paul’s Radio Forum who assisted with info for this repair.

I tried this one transistor at a time, starting with the mixer oscillator and working up towards the audio stages. Eventually cutting the screen lead on the third RF transistor got the set working but it sounded distorted.

The audio across the volume control was clean when monitored with an external amplifier (Why not use a spare valve set with a gram position?) so the distortion was obviously in the audio stages.
A check on the supply current showed only about 9mA being drawn so I suspected a fault with the main output transistors.

On closer examination the collector lead of one of the output transistors had snapped at the speaker transformer’s connecting tag. Re-soldering it cured the distortion.

The owner had asked me to change any faulty capacitors and generally “do up” the radio. In further use I discovered the tone control wasn’t very effective, having hardly any effect when operated. The associated capacitor (0.22uF, C35 as referred to in the Trader sheet) proved to be faulty. The sound quality was much better with this replaced, with a good range on the tone control.

I understand that C33, a 500uF de-coupling electrolytic hiding behind the speaker, can sometimes give trouble (In these later models this appears to be a 100uF) so that was renewed as a precaution. All the other electrolytics were changed in accordance with the owners wishes.

The innards were given a quick clean and all was re-assembled and tested again. All was well, so it stayed in my kitchen for a week or so playing Radio 4 Long-wave as I made my breakfast.

Interestingly I have recently acquired an earlier model for myself. That one is circa 1959 and uses all OC series transistors. Interestingly the earlier set has real metal BUSH lettering, whereas the set described has gilded plastic letters. Some wear can be seen in the picture.