I bought this radio at the Radiophile Shifnal exposition in autumn 1998, for £10. It was sold as non-working, but appeared complete from a brief look inside before buying. 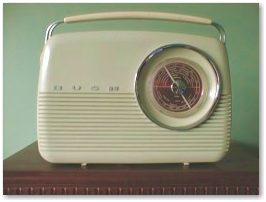 The interesting thing about these sets is the style of construction. Unlike most transistor sets, this model is built on an aluminium chassis with the transistors, IF cans and transformers on one side and most of the small components on the other side. The chassis is mounted vertically in the case, with the transistors visible when the back is removed. The same cabinet was used for the less successful MB60 set, which was a mains-battery valve model using five D*96 series valves.

The TR82 is easy to disassemble because all the components, including the speaker, come away with the chassis. The only tricky bit is removing the tuning dial knob. The manufacturers recommend the use of a kitchen sink plunger, but I was able to remove mine by carefully easing it away with my fingers. The pointer is simply pulled off. The chassis is held in place with four screws (only three in my set!), and is then lifted out. The speaker is fixed to the chassis with a capacitor clip around the magnet.

On test, the set popped when switched on, but nothing else happened. A meter in series with the battery showed that it drew around 70mA, whereas it should draw less than 20mA quiescent. My initial thought was that this would be due to a problem with the output stage, but a few voltage checks proved that this was OK. Further checks showed that the problem was with the driver stage, the driver transistor being turned hard on, so around 60mA was passing through the driver transformer primary. The driver stage actually consists of two transistors in a DC coupled circuit, and the Trader sheet diagram is shown here.

TR5 was turned hard, because the base of TR4 was not driven. This is supposed to be biased from the voltage drop across TR5 emitter resistor (R17 - 330R) which is decoupled by C33 (500uF). Further voltage checks showed there was no voltage drop across R17, despite the high current flowing through the primary of T1 and TR5. The rather surprising cause of this was that C33 was completely short-circuit. I say surprising because it is rare in my experience for low voltage electrolytics to become short-circuit (normally they just become a bit leaky and low in capacitance). The original was a small can in a clip under the chassis. I had no good vintage capacitors of this value, so I had to fit a modern replacement. Naturally, this was much smaller, but I was able to modify the existing clip to hold it in place. I double-checked the polarity before connecting it, because the positive wire goes to the chassis.

This bought the set back to life, but the performance was definitely below par. One of the OC45 transistors in the IF stage had been replaced by an unknown alternative by a previous repairer, so this was an obvious place to start. I had intended to change it anyway, since it stood out by its odd appearance and untidy installation. Fortunately I have a small stock of germanium transistors salvaged from scrap sets, and was able to find an OC45 of similar age and case style to the remaining devices. This improved the performance considerably.

The only problem now was the volume, tone and waveband controls were very noisy, and shot of contact cleaner sorted this. There were signs of other previous repairs under the chassis, including a 100uF capacitor mounted on the full length of its leads and flapping around in danger of shorting to other components. Fortunately the component itself was serviceable, and just needed fitting tidily. The OA70 detector diode had been replaced by an OA91, but since it was working OK and I did not have any OA70s, I left it alone. I was tempted to unsolder it and fit it more tidily, but its leads had been left fairly short and I was concerned that the heat from the soldering could damage it. I replaced the wax-paper capacitor across the volume control because the wax had gone soft and was coming away. This component is visible when the back is removed, so I fitted a good vintage component salvaged from a scrap set. 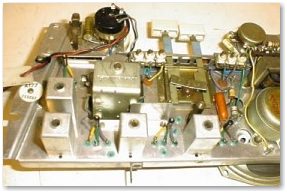 With the electronics now working, it was time to turn my attentions to the state of the cabinet. The main problem was that it was filthy. I decided against washing it however, because I was concerned that this could affect the outer trim and tuning scale. Instead I dismantled the cabinet as far as possible (the front and top panel can be separated from the surround by removing a few screws) and cleaned the individual sections with foam cleanser, paper tissue and an old toothbrush. In the process of cleaning, the "H" from the "BUSH" name came away. This pleased me because the chrome finish on these letters was coming away and I was wondering how I was going to repaint them without getting paint on the case. I removed the other three letters by pressing their fixing pegs from inside the case, and put them to one side for attention later.

After the cleaning, the case looked much better, but the vinyl trim on the sides looked rather dull and lifeless. I had bought a bottle of Greygate Plastic Polish at a Radiophile exposition some time ago but never used it. This seemed an ideal time to try it, and I was very impressed. The polish is applied with a cloth, allowed to dry, then polished off with a clean soft cloth. The buffing requires some effort, but this is effort well expended. I then removed the switch buttons and control knobs, and cleaned and polished them the same way. To remove the knobs the ferrite rod aerial must first be released, but like everything with this set, it's a simple job.

As I mentioned earlier, one of the chassis fixing screws was missing - this is because the clip inside the case that it was supposed to screw into was also missing and the plastic it was fixed to is broken. The other fixing for that side of the chassis was also lose due to crumbling plastic, so I secured this with some Araldite (epoxy resin). 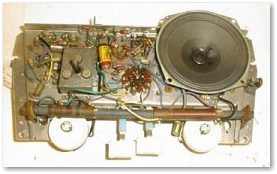 I then returned to the B U S H letters. They were originally chrome plated, but much of this had worn away leaving a rather dull cream plastic. I visited a few local DIY, car accessory, and art shops, looking for some sort of chrome paint, but the only thing I could find looked (from the colour of the cap) more like silver than chrome. I decided the only option was to paint them with silver enamel paint - although it does not match the chrome, it does look better than the dull plastic. The paint could be removed fairly easily if a better option becomes available in the future. While I was painting, I repainted the tuning scale pointer with white enamel paint. Although enamel becomes touch-dry within a few minutes, it needs several hours to set fully. The Araldite used to repair the case also needed 24 hours to set fully, so it was time to put the job to one side for a while.

A few days later I returned to the job. It was really just a case of putting everything back together and making sure it all worked. The B U S H letters were pressed into their holes and secured from the inside with a small amount of plastic cement (the type used for plastic model kits).

The chassis had to be tried and removed a few times while I got the loudspeaker (which had been removed to change the capacitor earlier) and the volume and tone knobs positioned correctly. With the chassis finally fitted, I fitted the tuning pointer but not the knob yet. I connected the battery and tested the set, and in the process made sure the tuning pointer was accurately positioned relative to the wavelengths on the scale. Once I was happy, I fitted the tuning knob and the back. Job complete!

The set is now on display in our lounge, and since it is fitted with a battery, it will prove useful in the event of any power failures. Of course, it also gets the opportunity to play for a few hours every couple of months, like my other sets!

Don Thompson made the following suggestion:

I was wandering around your site this morning and looked at the TR 82 entry in Recent Repairs. I noticed that you mentioned Araldite in connection with a case repair - I have found that clean chips scrounged from the inside of the back of the case, when disolved in Hammerite brush cleaner/thinners allows me to make virtually undetectable welds because the two edges melt and blend together.

I use an artist's paint brush for this sort of thing. And you can replace lost chips off the edge of the back by replacing with bits cut from the locating fence that runs around the inside of the back.