I bought this Bush TR130 at the Bristol Radio rally some 8-9 years ago for £6. It was in very tidy condition with only a loose battery lid. I was always impressed by this model because I used to repair some of them when I started out in the television radio trade back in 1976. 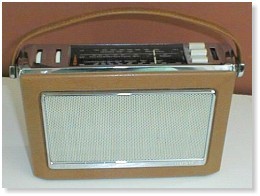 Many of these sets led a hard life living outside on building sites in all weathers. They would be bought to us for repair with cases held together by tape, string or elastic bands, covered in mud, and caked in cement and dust. The repairs were mostly for blown output stages, shorted screen-collector IF transistors, or faulty on off switches. Once the fault was cleared we would patch the case back together as best we could before sending it home with its owner. It generally lived high up on some scaffolding tower or next to the cement mixer on a building site. In the 1970's many of us would have heard these sets blasting out Radio 1 from the nearest building site across many cities, towns and villages around the country.

I use my set on a frequent basis and it really gives an outstanding performance, AM at its best. You will not find a louder or clearer 1W output from any other set and yes I did give it a sound check. On a day off during the week when I thought everyone else was at work, I placed my set on a wall outside my flat and played Virgin 1215 at reasonable volume which you could clearly hear at the end of my cul-de sac. Unfortunately some of the neighbours also had a day off and did not appreciate the finer points of a loud 1W-output stage!

On the same evening that I bought this set, it ran for a few hours then failed. No sound, but a buzz could be heard from the speaker by injecting a signal from my finger via a screwdriver on to the wiper of the volume control. Further tests with the multi meter soon proved the fault to the final IF transistor. It was leaky from screen to collector i.e. the usual thing on this generation of sets. A replacement AF117 and a small tweak soon had the set working again. I do remember this repair well. It went wrong at 9 O'clock on a Sunday evening and I still made it to the pub for last orders after clearing the fault!

It looked like the alignment was out as some of the stations were a long way off the mark, so using the information available from a 1966 Newnes servicing volume, I did an RF/IF alignment by ear, as unlike now I did not own a signal generator. My tip for doing RF alignment without a signal generator is to do it during the day using weaker stations (to avoid any AGC action) of known frequency at either end and in the middle of the bands. This should be not be problem for most parts of the country. (I might string a few words together about this if anyone is interested).

Replacing the output transistors cleared intermittent noise even with the volume at minimum. AC128'S were used because I did not have any OC71's to hand. A minor adjustment to the idle current was all that was required. I followed the service sheet instructions by breaking the supply link to the output stage. With a good battery or bench supply the total idle current consumption of this set is between 10-11mA, but just watch it peak up to 50-60mA or more on a strong signal at reasonable volume!

A replacement on-off volume control and cleaning the wavechange switch bank also quietened things down nicely so there is no crackling effects at all now.

The battery lid was repaired by a friend who works in a machine shop and with a wipe over the cabinet,
the set is as good as new.

More recently the on/off switch seized on and it split one of the drive cogs as I tried to switch the set off. A replacement of both was obtained from those helpful people at Wireless Works at Bugle in Cornwall.

The set is now restored to its former glory.

This is a very easy set to work on but be careful when changing the on-off volume control or tone control as you may end up re stringing the dial drive!

This is a very attractive solid looking set with a very generous output, very good tone and excellent RF performance putting many of today's radios to shame.

NB: Paul Stenning mentioned in one of his articles about the relationship between sound quality and the size of the output transformer. This is certainly true for this model. Just compare the size of the output and driver transformers fitted to this model as compared with other portable sets that uses the same type of output circuitry. But this does mean that this set is no lightweight to carry around!