I purchased this set in the auction at the BVWS Wootton Bassett swapmeet in July 2004 for £50. Externally it was on good condition with no damage to the case, tuning scale or back. It included a mains lead with the original Bush connector. £50 seems to be about the going rate for these sets in vintage radio auctions - although they naturally sell for a bit more on eBay!

Internally it was clear that someone had been there before me! Many of the capacitors had been replaced with a motley mix of types. Checking against the service data I found that many were the wrong values. The only capacitor the previous repairer had missed was the one across the primary of the output transformer. It was a wax/paper type that was in a poor state so I fitted a replacement temporarily. 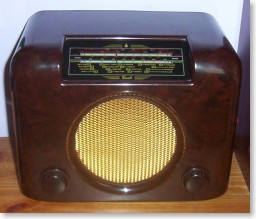 The main smoothing electrolytic had also been replaced by a can that was too tall to fit and therefore protruded some way below the chassis. It was also 50+50uF whereas the original was 32+32uF. I connected my capacitor reformer to it, which showed it to be in good condition.

Although there was clearly quite a lot of rework required, I felt it was safe to try powering the set via the lamp limiter. It worked OK, although it sounded rather muddy. The UL41 control grid was at 4V and continuing to rise slowly. I tried a temporary replacement coupling capacitor, which made no difference. A replacement UL41 sorted it. This was one that an anonymous person from Iceland had sent me (along with a UCL82) some time ago in thanks for my website! Thanks to whoever you are, if you read this!

The sound was still no better though, so the next stage was to replace the capacitors with ones having the correct values. This did not make a lot of difference either!

I also replaced the main smoothing electrolytic with a triple 32uF type (1970s vintage with a red sleeve), and connected the third section in parallel with the second section. This was the correct height and fitted more tidily. Two new dial lamps were also fitted at this point.

In a discussion in the forums, someone suggested that I check the resistor values. Sure enough, many of the higher value resistors had gone high - typically around 25% high. The 150K UBC41 anode resistor had risen to over 200K. I replaced this and another seven. The set now sounded a lot better.

The next problem was the volume control, which seemed to lose contact at the bottom end, and didn't go down to silent. After dismantling it, I could see that the track was badly worn right at the bottom end. I applied some conductive paint (as sold for repairing faulty car heated rear windows) to the offending section and left it overnight to dry. It then worked a lot better.

The alignment showed no signs of being disturbed, and the tuning seemed sharp enough, so I left this alone.

With the electrics sorted, it was time to clean everything. The white-painted reflector and white plastic diffuser for the tuning scale lamps were filthy, so I cleaned them with some foam cleanser. The rest of the chassis wasn't too bad, but I gave it a wipe over with tissue soaked in foam cleanser anyway.

I removed the tuning scale, speaker and grill. The cabinet was generally tidy but had a couple of dirty patches. These were cleaned with foam cleanser. There was also a sticky patch where the auction label had been, which was cleaned with label remover. I then polished the whole cabinet with Bake-o-brite. It came up really nicely!

The speaker grille had some deposits that look like someone tried to clean it with Brasso. It was also fairly dirty. I cleaned it with foam cleanser and a nailbrush.

It was then simply a matter of putting everything back together, which was completed without a hitch.