This little set had been bought from a well known Internet auction site by one of my regular customers. It had worked when first plugged in, but the sound soon faded. Because the set was wanted for use on the picnic table this summer, he got in touch.

Despite being a Mains/Battery portable, typical Bush quality is in evidence and the whole thing has a solid feel about it. The optional Bush mains power unit is fitted, making this a practical radio for restoration. The speaker seems to be larger than usual for a battery set, so should sound reasonable when completed.

This little set seemed to be complete, and in good condition, the only evidence of previous work was a taped joint in the mains flex and a couple of replacement valves. The customer had kindly included a copy of the trader sheet.

In my experience these miniature battery valves don't have a terribly long life, and are often found to be low emission, particularly in mains/battery sets where the constraints of (expensive) battery life do not prevent extended periods of use. That said, these valves are still easily available and fairly cheap.

It is also doubly important with battery sets to check "that" capacitor, isolating the grid of the output valve. The output transformers required to match these miniature valves are wound with extremely thin wire, and are particularly vulnerable to excess current flowing through the output valve.

As this is effectively an AC only set a three core cable will be fitted to provide an earth, since the chassis is accessible without the use of a tool.

The ceramic connector blocks were removed from the mains flex, leaving around 2 ft of the original cable. As part of the mains checks I always check the mains voltage selector is set correctly. In this case the selector was set to 200-210 volts. Not a good omen regarding valve life! If the set had been inadvertently over run with the tap at 200 volts the heaters would have been over driven, particularly critical with miniature battery valves having such a small cathode, and resulting in shortened life. Alternatively the tap could have been set to a lower mains voltage deliberately to boost failing performance from already low emission valves. Either way it didn't look good! 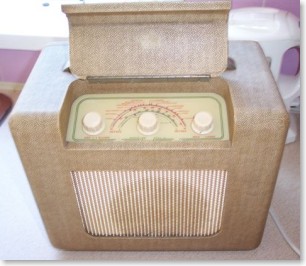 All other mains tests showed nothing amiss. Since the mains flex was only two feet long, I decided to change it for a more generous length of 3 core before any further work. In order to prevent the metal cable clamp from cutting into the cable sheath if the cable was pulled, a rubber sleeve was fitted over the end of the cable. The earth was connected to an existing chassis tag.

Three of the valves tested as "reasonable" on the AVO vcm, but the DAF91 was giving lower emission than I would have liked. The valves were refitted, and since the set had already been plugged in (the HT caps wouldn't re-form anyway) I applied power via the safety lamp.

Well, the set sort of worked. Although several stations could be heard on both bands, they were badly distorted and barely audible even with the volume control at maximum. There was no hum though, and the HT cans were still nice and cold, so hopefully no problems there. The safety lamp was hardly glowing, but once bypassed the set's HT rose to about 85v.

Approximately +2.5 volts was present at the control grid of the output valve, the 0.005uF (5000pf) wax capacitor obviously leaky. It was replaced with a 4n7 polystyrene capacitor rated at 160v. The distortion seemed to be "heavy", almost like clipping, and was unaffected by the change of DC blocking capacitor. Touching the control grid of the DL94 with a screwdriver gave a slight hum, but there was nothing when the test was repeated at the centre tag of the volume control, indicating a possible audio stage fault.

The DAF91 pentode anode voltage was about right, but the screen grid voltage was well down. The trader sheet gave this as 20 volts, but I was measuring less than 10. Since I was using a digital meter I would have expected a higher reading than that given in the trader sheet. I wondered if this low screen voltage could be restricting the valve current, and cause the valve to behave as though it was low emission.

The 2.2 Meg ohm screen grid resistor was within tolerance, but the 0.05uF wax paper de-coupling capacitor (C20) was found to be extremely leaky, so too much voltage was being dropped by the screen grid resistor, leaving a lower than expected screen grid voltage. The leakage through the capacitor was so severe it was easily measured on the x100 ohms range of a standard meter. A replacement capacitor brought about a transformation at the next test, with the little set now producing lashings of fair quality sound, (I actually had to turn the volume down!!) and a few stations that had previously been inaudible. I was going to replace the wax capacitors as a matter of course, but it is good to find a fault properly sometimes and keep one's "hand in". 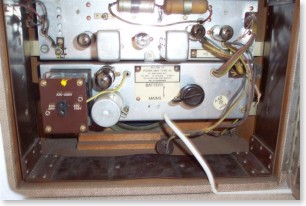 The remaining wax capacitors were tested as they were removed during the renewal process, and all proved to be leaky. The "next worst" in leakage compared to the DAF91 screen grid de-coupler was a large 0.5uF mounted on the top of the chassis, to provide AC bypass to the valve filaments. Since the set was likely to be opened frequently in order to stash the mains flex, this capacitor and a metalised paper type adjacent to it were left in situ for aesthetic reasons. The connecting wires to the capacitors cut near their connecting tags below the chassis and the wire left in situ to preserve the upper chassis appearance. Both were replaced electrically by smaller modern types located under the chassis.

To improve access to a couple of the wax capacitors I found it convenient to remove the tuning capacitor. Since this set has a direct drive there is no drive cord to worry about, and as I had removed the tuning cursor and tuning scale for cleaning, the operation only added a few extra minutes to the job, but saved lots of hassle! I found it was not necessary to remove the connecting wires, (the tuning cap will swing out of the way) but thought it prudent to turn the gang to minimum to prevent any damage to the vulnerable vanes.

With replacement capacitors the set worked very well, and probably wouldn't need alignment. I started the procedure, but it seems alignment was already good as any adjustment reduced the peak signal, the best readings obtained at the original position of coils/trimmers. These were all re-locked with correction fluid.

NOTE: The two "umbilical" connections are not terribly long, and do not supply a chassis connection between the power module and the radio chassis. If you need to test your BAC31 on the bench, a connection must be made between the frames of the two units. I was not able to keep the two units screwed together AND allow them to remain connected to the frame aerial assembly.

Since the chassis was already out on the bench, it would not require much additional effort to clean up the tuning scale and knobs. The pull off knobs proved to be very stiff, thwarting all attempts to remove them by the usual "string" method. In the end I crossed my fingers and gently prised them off with a medium flat blade screwdriver. The tuning scale was then removed and the backing plate carefully brushed to remove the dust and wiped with hand cleansing tissues, which restored the original cream finish extremely well. Baby wipes were used for cleaning the back of the printed Perspex scale, as they remove dirt with hardly any rubbing. I noticed the front of the frame that supported the scale was bent. It was easily straightened by hand though and the scale re fitted. Both chassis were replaced in the case, and connections made via plug and sockets.

After the metal retaining clips had been removed the knobs were washed in a bowl of soapy water, and the stubborn dirt removed with an old toothbrush.

The inset lettering on the Bush badge at the front of the set was given a going over with a wax crayon in a colour matching the original markings. Excess wax was easily removed with a dry cloth and a quick "swipe" of clear acrylic varnish was applied to protect the newly restored lettering.

The door catch, although slightly rusty was serviceable, and since the customer wanted the set back in time to use it for the rest of the summer (whoops, that was the two weeks of sun in May! :) I didn't bother trying to find a replacement.

NB. IF WORKING ON THE RADIO ENSURE BOTH FOUR PIN PLUG/SOCKETS TO AND FROM THE POWER UNIT ARE PROPERLY CONNECTED OR IF THE POWER UNIT ALONE IS BEING WORKED ON, SAFELY INSULATED. THESE CONNECTORS CARRY MAINS AND 90 VOLTS HT.

The owner had also ordered a set of replacement valves for the set, and performance was noticeably improved when these were fitted. A definite improvement in performance occurred when the voltage selector was set to 220 volts (none was discernible even on 200v with the old valves) for a few seconds, suggesting that these valves actually had some emission!

Bush designers had really made an effort to produce a quality battery set. There were a number of small design details I was impressed by, and two in particular.

The first of these was the ingenious method used for on/off switching. When used with the power unit the connections via the plugs and sockets are so arranged as to enable the mains to be switched, whereas when used with battery only the switch merely handles the battery. Very admirable!

Another feature I was particularly impressed by was the captive screws used to secure the top of the chassis to the cabinet. These are quite awkward to access and would otherwise be a real pain to re fit when replacing the chassis in the cabinet.

All in all, a delightful little radio.