This radio was sold by Barker's of Kensington under their own name, but manufactured for them by Cossor (this point is questioned by Chas on the Barker page - Paul). It was an exercise in giving customers the maximum amount of radio for the minimum money. It has eight valves, including the magic eye and the rectifier, and a push-pull output giving eight watts of power. Hence, 88 meant eight valves and eight watts. 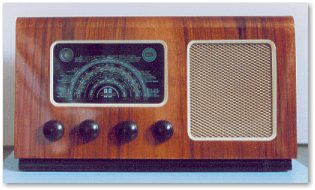 The International Octal valve line up is 6K8 frequency changer, 6K7 IF amplifier, 6Q7 detector and AF amplifier, 6J5 phase splitter, 2x 6V6 output, 6U5 magic eye and 5Y3 rectifier. The cabinet styling is very 50s, with walnut veneered plywood construction, a sloping front and rounded front edge to the top. The speaker grille is anodised gold expanded aluminium mesh, very much what we used to buy in the Edgware Road in the 50s for just that purpose. With a 465 Kc/s IF, but single tuned RF circuits before the frequency changer, the image rejection is good on Long and Medium wave, but poor on short waves. The IF and audio bandwidth is fairly wide, giving good fidelity at the expense of audible 9Kc/s whistles caused by inter-station carrier beats, particularly on medium wave in the evening. Said whistles can be calmed with the tone control. Connection of a Hi-fi loudspeaker (Spendor BC1 studio monitor) shows the Barker to have very listenable audio quality with smooth, deep bass response. Much of the bass is unfortunately lost by the built-in speaker, which has a rather stiff suspension and high bass resonance.

The Barker was built very economically. The manufacturer appears to have cashed in on the Government surplus and Manufacturers surplus capacitors, resistors and valves which were readily available at the time for about a quarter of the cost of new, branded items. The circuit design is simple and some components such as cathode bias resistors are shared by more than one valve. HT smoothing is by resistors rather than a smoothing choke. The output transformer, which would have been a relatively expensive item, is surprisingly small to handle 8 watts. However, whereas, with a single-ended output the transformer has to withstand the magnetising effect of the standing anode current of the output valve, the use of a Push Pull output cancels this out, leaving the transformer core to handle only the AC component. Could it be that it was cheaper to use a second valve than to use a bigger transformer?

All of the radios I have restored seem to have been abandoned in a damp loft, garage or outhouse for many years and the Barker was no exception.

The initial inspection showed the usual but welcome amount of dust, indicating neglect but lack of recent unwanted attention. The wiring was mouldy and the chassis was rusty, confirming the effects of damp, but the cabinet did not appear to have suffered too much. On examining the underside of the chassis, all components appeared original - resistors were mostly white ceramic cased carbon quarter and half watt types with stripes for colour code. Most of the "paper" capacitors were not the usual waxed paper but hermetically sealed moulded mica types in tubular sleeves which close inspection showed to have been made to US military JAN (Joint Army/Navy) standards. I unsoldered one end of each and checked their insulation, which was fine. There were a couple of real waxed paper capacitors which were leaky and needed replacing. There were a few two to four watt carbon resistors, which showed evidence of heat. The can for the HT smoothing electrolytics showed no bulges or leakage. All valves were present and visually OK, though there was rust on the metal sleeves round the bases of the 6Q7GT and 6K8GT. The chassis and components cleaned up well.

The Barker 88 is an AC mains only set, so it was possible to fire up the rectifier alone having removed all other valves. Having checked for the absence of any bleeder resistors or other sources of leakage from HT to earth, I disconnected the rectifier cathodes from the reservoir capacitor and inserted a 22K resistor and an Avo Model 8 multimeter in series to monitor the leakage current of the electrolytics. Since the mains transformer has a 250-0-250V secondary, the off-load HT voltage from the rectifier will be 250 times the square root of two (1.414) which is close to 350V. The 22K resistor will limit initial current into the electrolytics to about 16mA. Switch on (coo there are dial lamps too!) with the meter set to 25mA range and Lo! a 16mA current soon falls to 10mA or so, falling further to about 2mA over the next half hour. Cut the resistor to 10K and repeat. Finally cut the resistor to zero and check. 2mA or so seemed fine for the 8+16+16 mfd combination of electrolytics and the can was staying cold, indicating that the electrolytics were happy with the result too.

With this done, I replaced all the valves and switched on and got fair results on all three wavebands. The magic eye was only just possible to see in the dark. The life of the phosphors on magic eyes seems to be much shorter than the emission of the cathode and it is getting very difficult to find new ones. Valve and Tube Supplies came to my aid with a good used 6U5G. There was more distortion than I had expected and this led me to look at the components in the audio phase splitter and output stage. On this Barker 88, the phase splitter is a triode with equal cathode and anode load resistors. Both resistors had gone high, but one was much higher than the other, unbalancing the drive to the two output valves. The originals had been carbon quarter watt types with 10 per cent tolerance. These were replaced with two per cent metal film resistors. A couple of the 2-Watt HT smoothing resistors and the 3-Watt cathode bias resistor of the output stage were replaced by metal film and wirewound resistors respectively. A check on cathode voltages showed all valves to have at least two-thirds emission and I would not throw away valves with that much life in them. Careful RF and IF realignment brought the set back to the level of performance I would expect from the design.